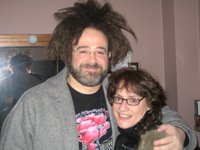 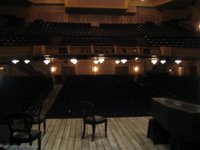 We ended our long weekend in New York by going to a show with Adam and Amy last night. The rendition of Sweeney Todd http://www.sweeneytoddonbroadway.com was amazing with the actors actually playing all the instruments on stage. These were some extremely talented people moving from Cello to violin, flute to clarinet, guitar to piano and so on. Patti LuPone, pictured above with Adam, actually played tuba at one point and did a bunch of the percussion while playing the part of Nellie Lovett. Michael Cerveris played Sweeney and was brilliant. He also invited us back stage after the show where we had a few drinks with him, Patti, Lawrence Fishburn and Johnny Depp. Lawrence and Johnny happened to be in the house and were not in the show.

We didn't leave the theater until around midnight so we had dinner a little late but it was a good time. This morning came kind of early and we took the 11am shuttle home. The boys were eager to see the presents we promised them before we left on Thursday. I think they actually missed us a little but were more interested in the dinosaurs and lighted dinosaur hunting helmets, complete with miner light attached. We've been catching up with the boys the rest of day and will probably hit the hay early tonight.

The grandparents did a fantastic job with the kids and we really appreciated the time away. Time for bed.
Posted by Mark at 6:49 PM