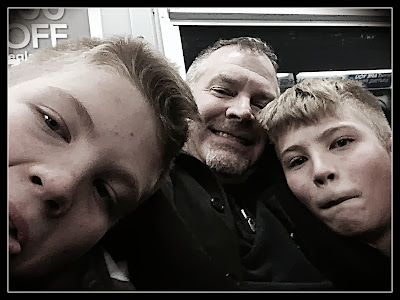 Something closed interstate 95 in both direction near the Delaware/Maryland border this afternoon that sent us scrambling for another route over the Susquehanna and adding almost two hours to our trip. We did cross on route one after a bunch of wrong turns. The Toyota navigation system is not on par with Acura version and did not help much until pulled over re-adjusted the bastard. We are home now with found memories of another thanksgiving in New York. This is a picture of us on the R train on the wY home from the basketball game last night. We got home and warmed up some leftovers and watched Man of Steel in 3D in Adam theater. Didn't get to bed till 1am. I will sleep well tonight.
I
Posted by Mark at 6:32 PM No comments: 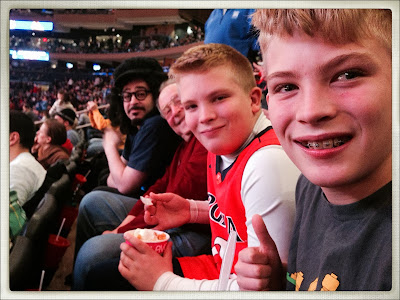 We went to the final of the NIT preseason tournament tonight. It was Duke vs. Arizona and a really good game that Arizona pulled out in the last few minutes. Uncle Adam got us some sweet tickets at mid court, about 10 rows up. The boys had a blast and when I say the boys, I mean all five of us.
Posted by Mark at 11:12 PM No comments:

We had 13 for dinner tonight. Aunt Elaine came up from Philly, Dana Connelly was here, her dad and Adam are old friends from Berkeley and she now goes to NYU. Randy from LA happened to be in town and Julie from the bands touring staff was here with a couple crew from her current gig. It was a fun night with great food and lots of wine. Per usual, it was all too much and put me in a food coma.
Posted by Mark at 10:42 PM No comments: 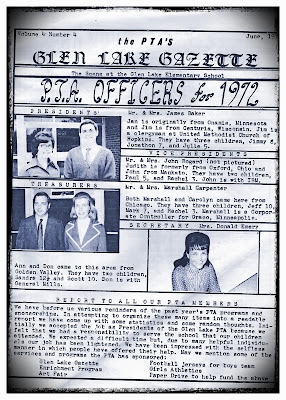 My friend John Weill posted this on Facebook. If only Marsh and Carolyn would have continued their political climbing. They could have out Bill and Hillaryed, Bill and Hillary, or would that have been Richard and Pat?
Posted by Mark at 9:12 PM 1 comment: 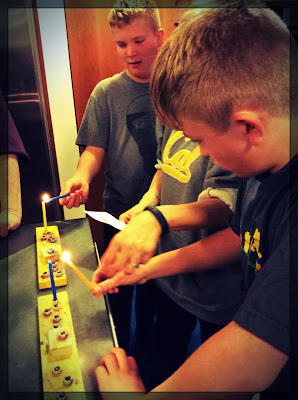 The eight crazy nights begin again. Coinciding with thanksgiving will not happen again until 2070 in some calculations.
Posted by Mark at 6:59 PM No comments: 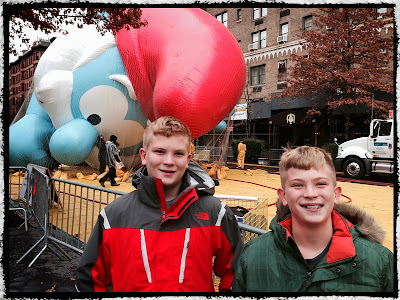 We went up to the planetarium in the natural history museum this morning then strolled along west 81st and west 77th streets to see the Macy's parade balloons being filled. Not all of them were in fill mode but we saw a bunch. It's rainy and cold out there now. We are in for the night. Likely watching Man of Steel in 3D on Uncle Adams ginormous tv.
Posted by Mark at 6:12 PM No comments: 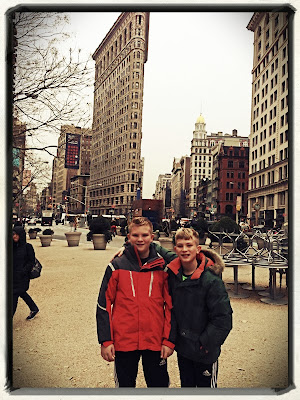 We stopped for a photo in front of the Flatiron Building on the way to the museum of math. It was a nice little museum but didn't take long to discover it all. We then headed back to Soho to buy basketball shoes for the boys. They are very fancy now. Off to see Motown in a few minutes.
Posted by Mark at 5:53 PM No comments: 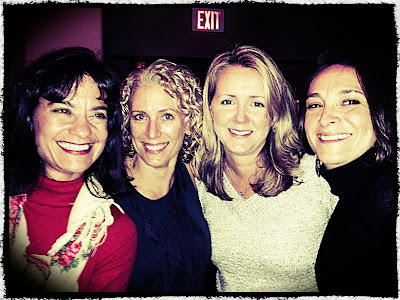 Nicole and I met friends out in Old Town last night and had a good old time. The plan was to have drinks and appetizers but we were a little low on the app side of the equation so my head hurt a tad this morning. Winter finally showed up this morning and I'm not sure we've been above freezing today but I really haven't been outside anyway.
Posted by Mark at 3:53 PM No comments: 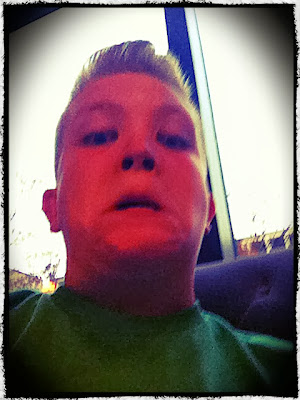 The three boys are getting out hair cut by Patrick today. Tough basketball game early this morning. Got man handled by a good Arlington team.
Posted by Mark at 4:45 PM No comments: 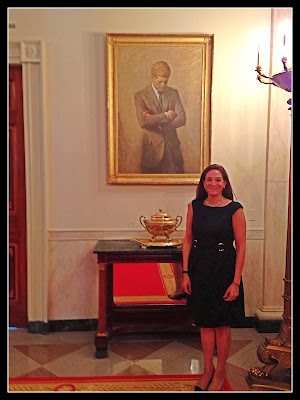 A shot from this summer when Nicole was at a white house briefing. It seems an appropriate post today.
Posted by Mark at 6:25 PM No comments:

End of the Season 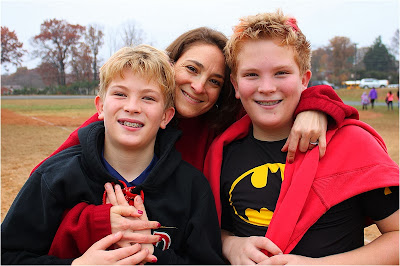 The boys handled their playoff loss yesterday pretty well. They justed shifted into basketball mode. Reset.
Posted by Mark at 8:56 PM No comments:

Keeping up with the games 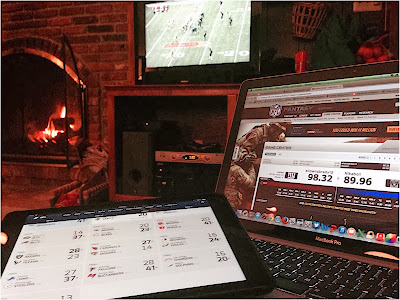 I like Sunday afternoons during football season. Lots to keep track of with all the fantasy leagues and games to watch.
Posted by Mark at 8:16 PM No comments: 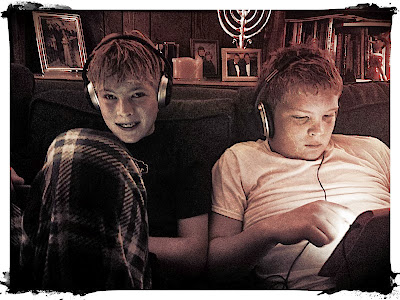 First off, our playoff game in flag didn't turn out so well. We lost to the cyclones who beat us in the regular season as well. The Tigers started off a little sluggish and never really recovered. Sam did score two touchdowns and a 2 point conversion but the team went down 30-14. We just can't seem to get a good game going when it really counts in that sport.

On the flip side, basketball went really well. Dylan returned to his honey badger self with some intense play. He seemed lost in last weekends tournament but he was all over the court today. He only finished with 1 point, 5 rebounds and a steal but man he was a man possessed on defense. Sam scored 14 points, had 6 rebounds and a steal. He looked really good on both sides of the ball. The kid has some fantastic moves underneath the basket and was able to get open a lot, using his size to dominate in the paint. His touch has also improved a lot from last year. We have a good team with exceptional guard play and some really good forwards. Dylan is mostly trading time with Sam at center but was also in as a forward a couple times.  The LMVSC Patriots won 40-20. Go Patriots!!!

We are now down to one sport with football and soccer over. It looks like it will be an exciting season.
Posted by Mark at 6:32 PM No comments: 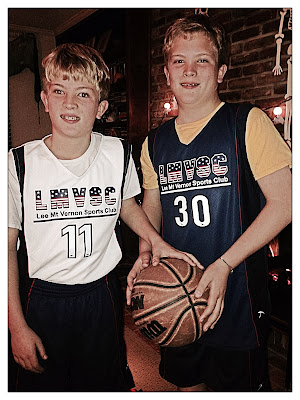 The team jerseys, shorts and shooting shirts were handed out at practice tonight. Go Patriots!!
Posted by Mark at 8:48 PM No comments: 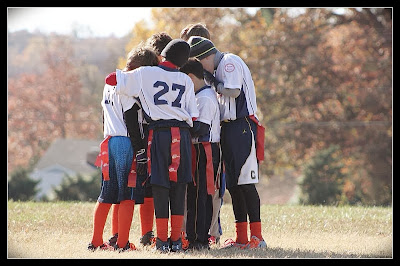 It's the eve before the flag playoffs and a divisional seeding game in in basketball. Sam's ankle is getting better and he is riding the stationary bike to loosen it up and strengthen it a bit. Dylan is on his way to basketball practice where they will likely get their uniforms. Pictures of them in them later if that happens. I hope they do well in both sports tomorrow but mostly that they have fun. They've worked hard since August to get to this point in football and it's really the start of a new team journey with basketball.
Posted by Mark at 5:47 PM No comments: 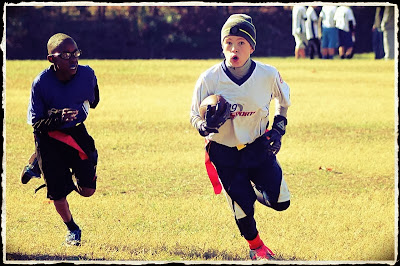 Sam as laid up with his ankle issue, which left Dylan to fill some holes in the football and basketball teams. After his fantastic performance on the grid iron yesterday, he hit the court with his team for 3 games. Their basketball team is really good but down three players today. They had a lot of fight in them but fell short in all three games. With just 7 players, they were exhausted at the end and they had to play a 6th grade team with a 6 foot center that Dylan had to guard. It took him a little while to get acclimated but he finally started playing like the honey badger we are used to. He ended up with 4 points on two great jump shots, a dozen rebounds and 3 steals. It was a slow start to the season but this travel team is going to be great for his progression and it is way more fun to watch then the rec league.

Sam tried his best to not look disappointed and encourage his brother but is still salty that he missed out on all the fun. The team could have used his services as well. They lacked a big man under the hoop. We are trying to get him back for next weeks games. Finger crossed.
Posted by Mark at 7:07 PM No comments: 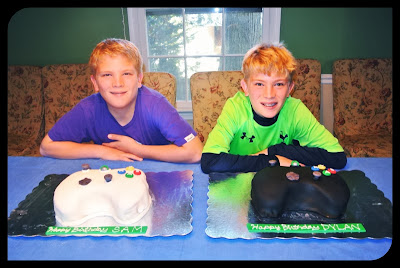 The boys had their birthday party today with about a dozen kids. We rented a video game truck that parked in front of the house and had 4 big screen TV's with Xbox's and Wii's attached. The kids spent two hours playing video games and screening all they wanted while we stayed in the house and had a few cocktails with some of the parents. It was a brilliant idea, not having to drive anywhere but not really having the kids on the house either. We had pizza and cake in the screened porch which is much better than all those monsters messing up the dining room. All together a success.
Posted by Mark at 7:48 PM No comments: 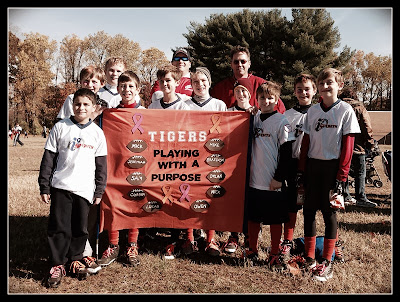 Sam was on injured reserve today with a bad ankle but Dylan made up for his brothers absence by scoring two touchdowns and intercepting two balls. Corbin added two nice TD's for a 24-12 win against the Hawkeyes. Sam is on his way to getting better and should be able to return next weekend but not for tomorrow's basketball tournament. He's a little salty about that but it would be worse to rush home back before he's ready.
Posted by Mark at 2:57 PM No comments:

On the eve before an action packed sports weekend, Sam rolled his ankle and will be on injured reserve for a week. The weekend was supposed to start with the free throwathon then on to a football game at 9am tomorrow and then three basketball games on Sunday. Dylan is going to pick up the slack and play twice as hard but Sam is pretty disappointed.

Sent from my iPad
Posted by Mark at 5:21 PM No comments: 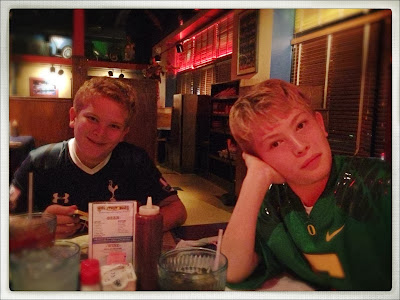 The boys turned 11 today. They are one of my best ideas ever. I love you both madly.
Posted by Mark at 7:27 PM 1 comment: 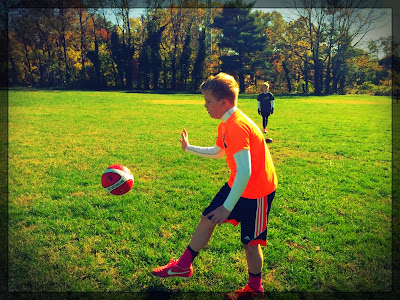 The extra hour of sleep was much needed today. I needed to catch up on sleep after a busy week. We spent a little time outside throwing a football and working on some soccer moves on this glorious fall day. The Vikings lost and Redskins won which sucks both my adopted teams, Patriots and Seahawks won so it wasn't a total loss.

The boys turn 11 on Wednesday. Hard to believe.
Posted by Mark at 8:43 PM No comments: 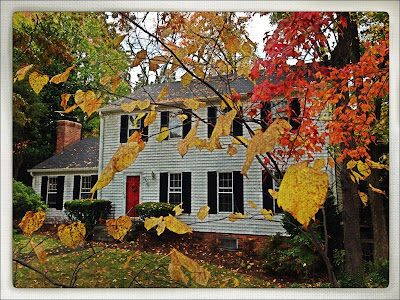 Busy day of sports for the boys. They each scored a goal in a 2-2 draw in their 9am soccer game. That's it for soccer this year. Sam finished the year with 6 goals, Dylan only had one in 5 games. They missed a few because of football. They had another great day on the grid iron. Sam ran for two TD's and threw a long pass to Corbin in the end zone for another TD. He also caught a 2 point conversion pass from Corbin. Dylan had another nice long running TD and caught a beautiful bomb in stride from Sam but his flags came came off after a couple more steps and was called down after 30 yard catch. If your flag belt comes off you are down but he had clear sailing to the end zone.

The trees are in full color this weekend and the temp is dropping again. A fire is burning and we are in for the night.
Posted by Mark at 5:22 PM No comments: 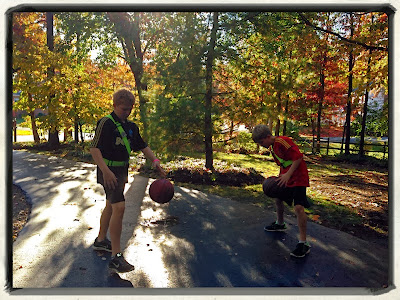 We had our last soccer practice today and will soon be hanging up the cleats for the year and breaking out the basketball shoes full time. The trees are really showing color. It's just sad that the color only lasts a week so. I love the peak color time and always want to take it all in and save it for those grey winter days and hot and green months. We have a soccer game at 9am and a football game at noon. I will also need to find time to take some pictures of the trees too.
Posted by Mark at 7:16 PM No comments: