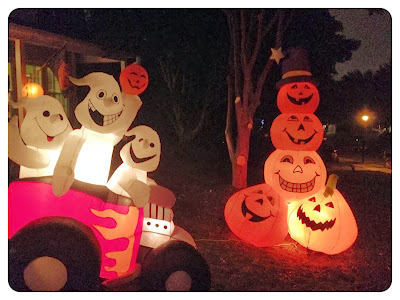 We went across telegraph road to trick or treat with the Wards this year. Tons of kids out and the houses seemed closer together so we could cover more ground. I was still tired after all the walking, as were the boys. On to November.
Posted by Mark at 10:04 PM No comments: 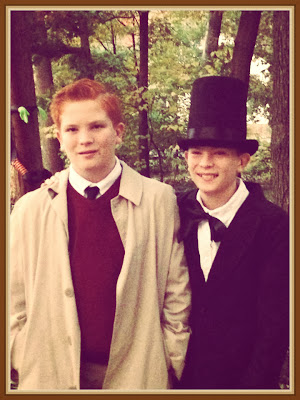 Tin Tin and Abe Lincoln (Vampire Slayer) heading to school.
Posted by Mark at 10:05 AM No comments:

The boys got measured for their jerseys and warm ups today at basketball practice. Sam is a men's large jersey, medium shorts. Dylan is an adult small for both. Good size kids.

Sent from my iPad
Posted by Mark at 9:59 PM No comments: 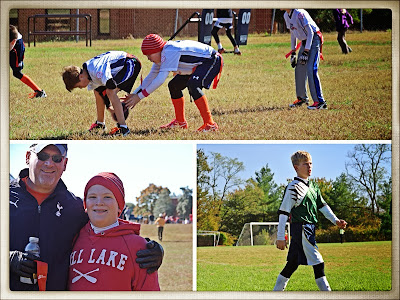 The boys won their football game this morning 34-12 with Dylan scoring once and getting an interception while Sam didn't score in a game for the first time in a year. He did get a nice interception. They lost their soccer game by a score of 4-0. Dylan had three really nice shots on goal and Sam had a couple. We are just back from a Halloween party and watching baseball and football in front of the fire. Tomorrow needs to be a low key day.
Posted by Mark at 10:04 PM No comments: 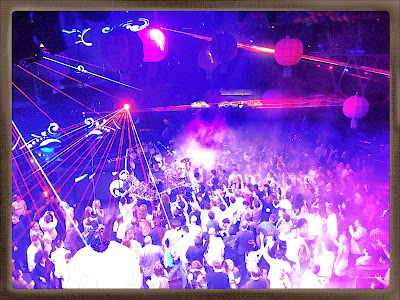 I just noticed the text I sent with the Pain Vegas post didn't make it. It described how I tweaked my back a couple hours before my flight to Las Vegas on Tuesday and the walking around the conference like the hunchback of Notre Dame. That on top of the sciatica I've been dealing with the last few weeks made the flight and the last few days less than fun. I did get a massage on Thursday and was able to go to the conference closing party at the MGM Grand. The conference was good and as long as I was sitting all was good. Moving from session to session was an adventure. I need to find a chiropractor soon.

I was able to upgrade on this mornings flight and I'm back home in virginia sitting in front of a blazing fire.
Posted by Mark at 6:15 PM No comments: 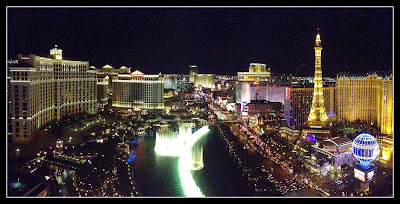 Fun party last night. Lots of great costumes. Nicole was over served and spent most of today on the couch.  I added a bunch of pictures to flickr, enjoy..
http://www.flickr.com/photos/homerclees/sets/72157636768588783/ 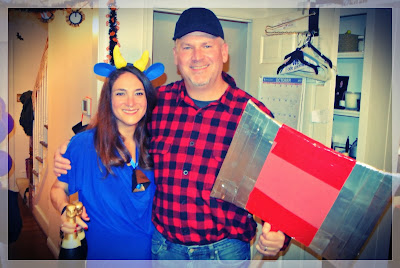 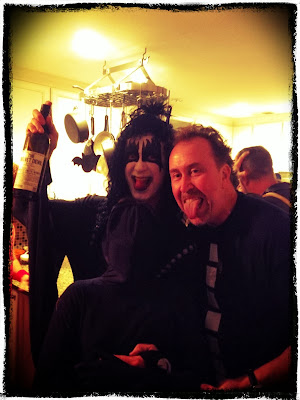 The Halloween party was fun. The boys and I are still up. Nicole is in bed. She was over served.
Posted by Mark at 12:11 AM No comments:

Calm Before the Storm 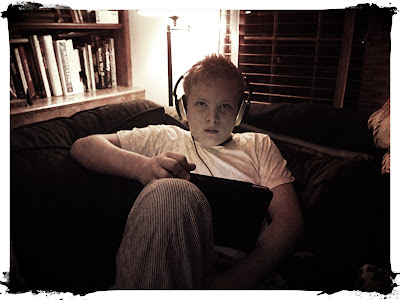 One more night until the Halloween party brings madness to the house. Nicole has been cooking furiously and I've been getting the house ready for 22 adults and 30 kids. It could get a little nuts.

We have a soccer game in the morning then we are in full party mode. I'm looking forward to seeing them play soccer. It's been a few weeks but they looked really good that day.
Posted by Mark at 7:14 PM No comments: 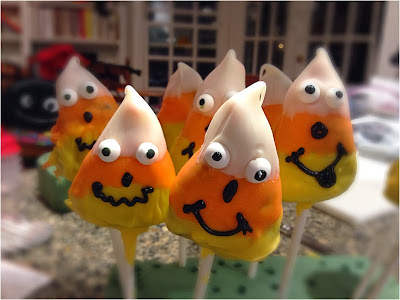 Nicole has been cooking for days and I've been pulling other things together for our annual shindig on Saturday. It's a lot of work but it's a fun night and we will see some people we haven't seen in a while. I do love this time of year.
Posted by Mark at 10:33 PM No comments: 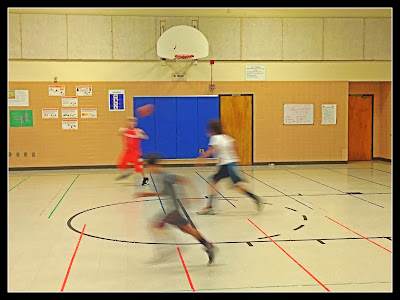 We still have half the season of football and soccer left but this travel basketball thing starts now. Yes, that's three sports at once but the actual basketball games don't start until mid November thankfully. We have two practices on Thursday and one Friday before a soccer game on Saturday. No football game this week. I hope they remember to play it. Actually, I heard an interview with Tony Gonzalez the other day (ex cal basketball and football player, now a great TE in the NFL) and he said his best training for being a receiver was basketball. I'm looking forward to basketball season. All these kids look really good and I'm noticing a couple that had beaten us in previous years in rec.
Posted by Mark at 7:44 PM No comments: 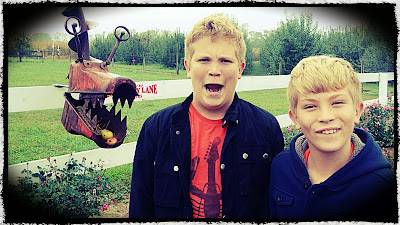 Drove out to Jefferson Maryland to visit and apple orchard and distillery. Sampled and bought some apple wine with grandpa while the boys and grandma picked apples. We had a nice lunch in Boonesboro then headed home. It's been a rainy weekend but we had some fun in the mountains of Maryland.
Posted by Mark at 6:33 PM No comments: 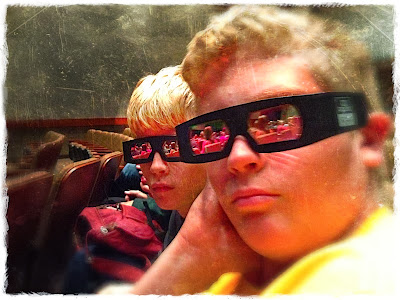 No football or soccer today due to all the rain we've gotten in the past few days so we went downtown to check out the exhibits at National Geographic. This included a cool 3D movie about pre-historic flying creatures. It was very well done and a nice outing.
Posted by Mark at 5:47 PM 1 comment:

The boys tried out and made the 5th grade boys travel basketball team this week. It was a quick decision to do the try out after our Recreational League coach decided not to coach this year and we were scratching our heads about what to do next. Sam really wanted to play travel ball and Dylan seemed a little scared of trying out in fear missing the cut and his brother making it. After some hard core convincing, we got Dylan to go to the tryouts where he did a great job passing the ball and playing mad defense, that's what he does, he's a stealer.

We held our breath for a day and a half but got the news that they both made the team last night. This is great news for their basketball progression because they will be playing with 8 other kids that really know the game and will be playing tough teams from all over northern virginia. We will miss our friends from the rec league but this is a great opportunity for the boys to get a lot better and extend all that they learned in the 3 weeks of basketball camp last summer.

The boys are competitive little monkeys and I love to watch them compete. This is the next step for Nicole and I too. It means more practices, games and longer drives to away contests. They both want to tryout for travel soccer in the spring which means something has to give. Football or baseball may be on the cutting block. 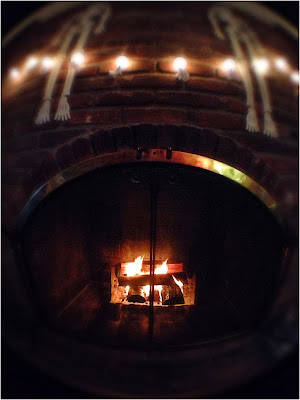 It didn't get much above 60 degrees today and it's been raining cats and dogs so I decided to dry things out with the first fire of the season. I have a few windows open as well but I couldn't resist. It already smells good in here and I like the warm glow.
Posted by Mark at 5:36 PM No comments: 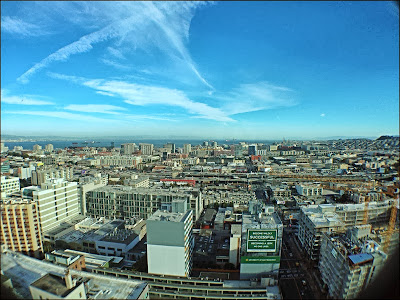 Just got into San Fran for a meeting. Left a rainy and humid DC for the chilly blue of San Francisco. We did need the rain pretty badly so I'm happy we got it and I'm looking forward to getting back to see how the leaves have turned.
Posted by Mark at 8:30 PM No comments: 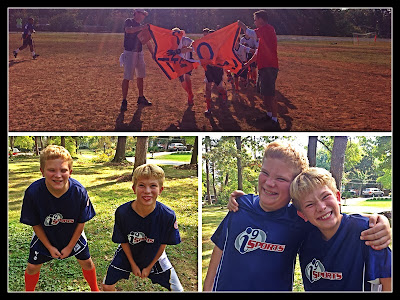 It was a hot day for back to back flag football games but that didn't stop the boys from running up a storm in a close loss and a redemptive trouncing. They lost the first game 20-18 with Sam scoring two touchdowns while Dylan had one. The whole team was a little sluggish and the offense was well, offensive. The other team was big and pretty good but I think the boys had their eyes on the next game.

Game two was a rematch of the last weeks tough and annoying loss. This featured a coach that was verbally heckling Sam, Dylan and a couple of our other kids. He was also overheard telling his team to "accidentally" trip or hit Sam. We let the league know that this wasn't going to fly and I had a few choice words with him. The league did respond this week with the commissioner lining up each of the six teams and coaches before today's games and giving them an intense "army drill sergeant" lecture on good sportsmanship and letting them know everyone was on notice. I've never been a big fan of the commish but I have to hand it to him on this move. Each team heard the same lecture and it worked.

The offending coach kept his mouth shut and while I don't know what he told his kids, they were perfect gentleman on the field. Sam was still pretty upset about about last week and while I tried to calm him so he wouldn't go out in too much of an agitated state he went ahead and torched that poor team. Scoring 4 touchdowns, two on interceptions in our end zone then taking it the whole length of the field. He had a third INT and also threw a 2 point conversion pass to Corbin. Dylan had a beautiful 40 yard TD run with some amazing Barry Sanders moves and had two quarterback sacks. We ended up winning 34-12.

The team is now 1-2 with some work to do in the next few weeks to get in the playoffs but I think they are starting to click. Regardless, the win today is very satisfying.
Posted by Mark at 5:38 PM No comments: 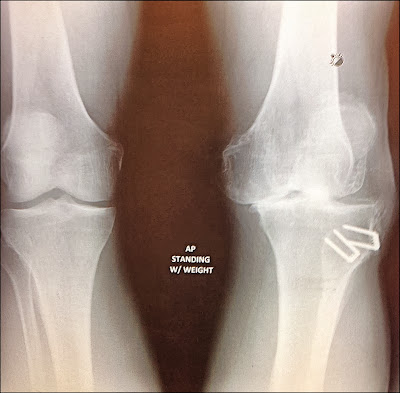 If anyone is interested in the reason I limp around like an old man, I've posted the X-ray I had done today at my annual knee discussion. You can see the difference between a normal knee to the left (my right knee) and a messed up knee to the right (my left knee) You can also see the two staples that were put there in 1982 to fasten my left quad tendon below the knee to give it lateral support. That worked for a while but running and time have taken their toll.

The plan is to hold out a little longer before replacing that bad boy. It does hurt a lot of the time but the possible complications of replacement and the replacement joints longevity are things to consider as well. I'm going to show this to Dylan and Sam when they get home from school and I bet they won't mention wanting to play tackle football the rest of the year.
Posted by Mark at 3:46 PM No comments: 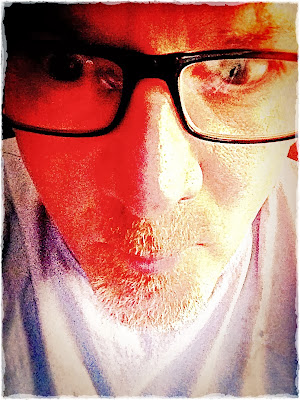 Just me and the boys for the last couple days and for another couple. Nicole is in Atlanta with the geezers and I'm a little bored since the kids went to bed. Sorta looking forward to two football games on Saturday but disappointed we will miss the soccer game because of it.
Posted by Mark at 9:55 PM No comments: Those tea baggers are pissing me off but the commute is easier without all those government workers off the road. Dylan is joining band this year with his mom's old sax. It really doesn't start till Friday but he already sounds ok. It's going to be a loud house this year.
Posted by Mark at 8:25 PM No comments: