Nice night for roaming the neighborhood and begging for candy. What ever happened to tricks? 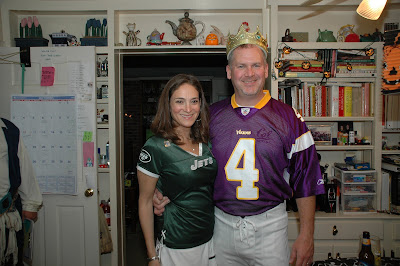 The party is over and the clean up continues. Watching the Vikings now in my new Favre jersey, not sure the Jets shirt will ever be worn again but he, it was a concept costume. It will be dark in an hour and we will have to get out and ring some doorbells for candy, not like we don't have enough sitting around here right now. Werewolf and Vampire cupcakes this year. Nicole has was working in them all day. The boys had book character day at school today. Basically, your costume needs to be based on a character in a book or history. I guess these are a couple of the band of brothers. Stephen Ambrose would be proud. Big party this weekend, the weather looks way better this year. Last year was extremely wet and cold. This year about 60 and clear. More pictures tomorrow. Its been a busy work week but I was able to get the kids to football practice yesterday. I'm really looking forward to the end of the day tomorrow and the halloween party on saturday. Cool air is on the way and I'm itching to open a bottle of wine, but it needs to wait till tomorrow. Just played a round of mini golf with the boys. They are much better football players at this point. Nice day to be outside anyway, very summer like. Nicole ran the Army 10 mile race this morning and is getting her nails done as a reward.

WOW, What a Game!

The little Broncos went into today's game with a 1-2 record and were facing the 3-0 Colts in crucial flag football game. Dylan has been playing well and has a team high 4 touchdowns but had also a stomach virus that has had him vomiting for 24 hours and unable to keep anything down. If fact, he puked on the way to the game. I didn't stop him from playing a good chunk of the time and he actually ran a 30 yard touchdown that was called back on a suspect flag guarding call. (BTW, the ref had a kid on the other team and called 3 of our touchdowns back, seems like a conflict there don't ya think?)

Sam was on fire and produced a touchdown on the first offensive play of the game with the now famous "throw to Dylan on the sideline the reverse it back to Sam" play. He did it again when we got the ball back but that was called back on another bad call by the ref. Sam scored his second TD just before half and we went into halftime down 12 -16.

The Broncos defense got mean in the second half and we held them scoreless even with Dylan starting to fade with no energy but the Broncos couldn't score either. Dylan took himself out until he finally rallied in the last two minutes and helped stop the last Colts drive. The Broncos got the ball back with about 45 second left, ran a couple plays that didn't work out so well then with the clock ticking down, Sam got the snap from center with 1 second left to play. He turned and threw a perfect pass to Dylan near the sideline, Dylan ran back towards the middle of the field and a second before he had his flag grabbed by a defender, handed it off to Sam who turned on the burners for a 35 yard TD run. Final, 18-16 Broncos...

The crowd went wild, at least the parents of the Broncos did and in the team huddle, Sam could barely contain himself and cried. I can't say who I'm more proud of, Sam with the 3 TD's or Dylan who toughed out a stomach virus, but didn't quit. All in all it was an amazing game and a ton of fun to watch.
Posted by Mark at 3:02 PM No comments:

I bought a new suit in Santa Fe back in August and wore it for the first time to the office today. The reaction I got from the boys this morning was a kind of look of wow, I didn't know you could clean up so well. They also asked Nicole "why is he wearing that?" The person I buy coffee from at Caribou treated me totally different and I think called me sir. A women I'd never seen before that works for my organization went out of her way to hold the door open for me and a couple of the people on my team stared at me in wonder.

Now, I've worn this suit before and others that I have but mostly to board meetings that are out of town. I just don't go full suit at work much anymore because It's just not as comfortable as slacks and an open shirt. I may have to do this more often or just go totally back to suits like back in the 90's. Nah, I'll just work it in more often.
Posted by Mark at 8:36 AM No comments:

Children of the Corn 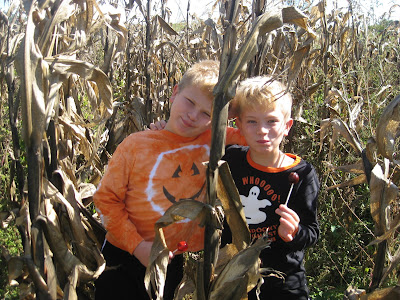 I played golf yesterday, badly by the way, but Nicole and the boys went our west to a pumpkin patch and got a few pictures. Fall is in full swing around here but yesterday was pretty nice for both golf and pumpkining. Dylan and Sam both scored on long runs to lead the little Broncos to a 14-0 victory over the Cardinals. They actually successfully ran a reverse that we practice over 40 times in the front yard this week. Sam as QB throws to Dylan, who is lined up right and then they run at each other and Dylan gives the ball to back to Sam, fooling the cornerback, resulting in a 40 yard TD for Sam. I get to take some credit for that play.

Dylan's TD was and inside handoff and 40 yard end run where he actually changed directions a couple of times to fool tacklers. They also made some key tackles in a shutout effort on D.

I wish I could play that game again. I could take those 7 year olds easy. I took my team to a cooking class yesterday after a morning strategic planning meeting. It was a ton of fun and quite delicious. It turns out that twenty people cooking together and a little wine can really position a team to accomplish great things.

Getting to the Corner 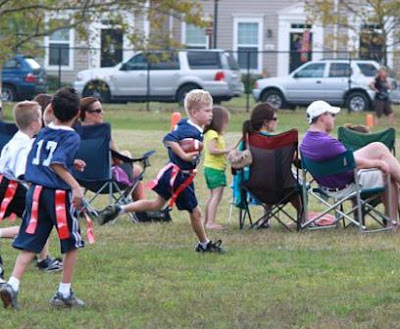 Here's Dylan on one of his TD runs on Saturday getting to the corner of the defenses and cutting upfield. He is amazingly focused when running, considering he is not so focused much of the rest of the day. Except of course when he is reading about football in a magazine or studying maps in his atlas. The boys had a good football game today but ended up with a loss to the Chiefs. Dylan ran for two touchdowns and looked pretty good with some solid moves to avoid being taken down. He was actually eyeing the the defenders and making speed and direction adjustments to get away. Both boys were grabbing flags on defense really well and chasing down anyone from the other team that got out in the open field. It was fun to watch and I think they will get even better as the season goes on.

I got back from a meeting in San Francisco last night and am happily watching Dylan play Xbox and same with the electric train right now. We are starting to get the Halloween decorations out now and will spend some of the night getting ready for our favorite holiday. Too bad it's too hot for a fire but the days are getting shorter and the nights colder. Many logs will be burned soon... I'm staying at a nice place right down off the San Francisco bay, across the street from the Ferry building. My trip west was pretty quick this morning and I was pleasantly surprised to see Randy Moss back in purple when I switched on my phone and went to Facebook. The football season just got interesting again. The first fire of the season is 8 days later than last year according to my blog. We left Florida at 7am this morning and landed in a cool 48 degrees back here in Virginia. It never got up much past 50 so I decided to burn some wood and get that fantastic smell back in the house. The neighbors probably think I'm nuts but it feels good. An exhausting but fun day at the other Disney park. Of course their are like 6 or 7 now but this one has been around the second longest amount of time. My knee is killing me but the martinis at Tommy Bahama are making things better. Back home in the morning. Dylan is a little flustered by the Belly dancer Marrakesh. Sam just starred and asked me for one dollar bills. My knee is singing but the three of us had a great time in the magic kingdom. Having a nice dinner at Tommy Bahama know with momma. Epcot tomorrow. This is one of those roller coasters Grandpa did not like last time we were here. The boys dig it. We hit the pool the minute we got here this morning, then a little lunch and a stroll thru the AARP exhibit hall. The boys learned about NASA, NASCAR and took a golf lesson. Off to downtown Disney in a bit for dinner.