Found this in one of my flickr friends accounts. Good times... I'm at an off site half day strategic retreat today and found this in the lobby of the hotel. I'm realizing I still have a lot to learn about the architecture profession. 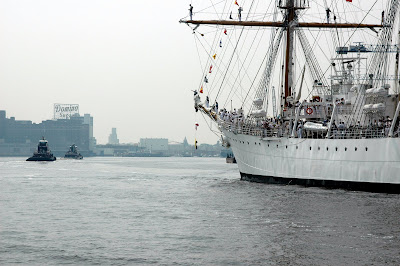 We spent the morning lying around doing nothing then went outside to do the spring cleaning of the screen porch and a little yard work. The boys were pretty helpful when it came to scrubbing the deck chairs, grill and various other deck stuff. They were soaked by the end of the whole thing and Nicole and I had a good time spraying them with the hose. I added a flickr collection from yesterdays trip to Baltimore. I don't know where the tall ship came from or where it was going but it looked foreign in my estimation. Flickr photo's here
http://www.flickr.com/photos/homerclees/sets/72157600276449195/ 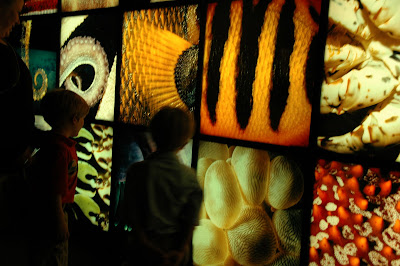 We had a nice trip up Baltimore to visit the National Aquarium today. We met Jessica in Federal Hill and drove down to the inner harbor just in time to see a tall ship being tugged out of the harbor. The aquarium was like I remembered it, fun the boys but I'm just not an aquarium fan. The dolphins in the dolphin show didn't jump enough but the boys loved that. We had lunch at Rope Walk in Federal Hill and headed home for a nap. Jessica bought the boys nice little gift bags that they loved and playing with some of the stuff now. I took a lot of pictures and some of them of the tall ship turned out pretty well. I'll post them on flickr later tonight or tomorrow. Happy Memorial Day everyone.

Opening day at the pool Opening day at the pool
Originally uploaded by homerclees.

They are getting big for the baby pool but the big pool is gonna be cold and I'm not sure I want to get in with them. Mike and Kelly are coming over later and we are meeting Jessica in baltimore for an aquarium trip tomorrow. Let summer begin.

I was responsible for the boys dinner last night because Nicole was drinking with the girls. I didn't have a great day at work so I was a little glum as I made the boys a lovely dinner of hot dogs and salad. We were sitting at the table when I eyed a couple little lizard toys they had on the table and decided to create an animated puppet like conversation between the lizards. The boys liked that a lot, so I escalated the lizard conversation and the boys were getting out of control laughing which made me start laughing and eventually we were all just head on the table laughing our asses off. I had to stop when Dylan started choking on his food and almost puked, but it was pretty funny.

I thought about that a lot today and it cheered me up over another fairly stressful day. When I got home tonight, the boys asked if I could make dinner again.
Posted by Mark at 6:40 PM 1 comment:

I'm on a panel discussion at the Gilbane Conference in a couple weeks and they just posted the speaker bios. This conference is run by Tony Byrne who I have relied on for Content Management System decisions my whole career. We worked with him at AARP when we were looking to replace Zope and used his report to choose the system we work with at my current employer. Anyway, thought I would let you know you that you still have time to sign up for this exciting conference.
Posted by Mark at 9:56 AM 1 comment: Had a nice lunch with Knowledge Executive team at dc coast today. Great weather and a nice walk back to work and now a nap. 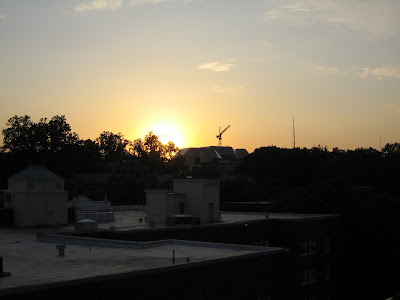 Went to a party tonight for David who left my old group at AARP a couple weeks ago. The tech team thru it at Chris's house (Donkey). It was nice and we had Helen sit for us and she did a fantastic job. They seem to go to bed early when she's sitting. This is a picture from the roof top deck of Chris's building. It was a nice night for a little party but we are home early watching West Side Story. Good times... Hooking up with Jimmy T and John for a nicole and Jimmy T birthday happy hour.

If you tried to watch the skating video and were having trouble viewing it, go back and try again. I had the setting to private in You Tube and I could see it fine but it didn't seem to be working with everyone's computer. I changed the status to public and it started working on Nicole's laptop. Go figure.

Anyway, I've been downloading Vintage Tooncast video podcasts for the boys letting them watch them on the Apple TV the past week or so. It turns out they love vintage Superman, Woody Woodpecker and Betty Boop cartoons. I've also downloaded and watched old cartoons brought to you by Chevy and the Petroleum Institute. The Chevy cartoons included versions of Cinderella where she ends up driving a new car home from the ball "A Coach for Cinderella" and one where a heroic knight has to choose between a princess and a Chevy at the end of a battle where the Chevrolet knocks down the castle. He gets both.

My favorite was the Petroleum Institutes Cartoon called "Destination Earth" where Martians come to earth and learn about the wonders of petroleum and how it's really hard to get it out of the ground but competition among oil companies makes it possible. (the oil companies fund the Petroleum Institute) They were colluding way back in the 50's for Christ sake. Here's the description from itunes.

"ChevronTexaco, ExxonMobil, BP/ARCO/Sunoco, and Shell/Royal Dutch (the American Petroleum Institute) bring you this timeless tale of American ingenuity and free markets, as interpreted by Martians."

I hope the skating video works for everyone now. It's really kind of cute.
Posted by Mark at 9:26 PM No comments: A successful fairly upscale dinner with the boys. Dylan had chocolate mousse for desert. We have a nice little, white tablecloth table at Geranio in old town. The boys have been behaving so far and I brought the nintendo for an after dinner distraction. I dropped Nicole off at work and took my usual route to my office and found this freshly painted 8th street NW. I have no idea why someone would paint the street but I thought it was pretty. Its Nicole's birthday today so remember to call and harass her.

The boys are getting a little better at the whole skating thing and seem to enjoy it even after falling on their behinds many times during the half hour lesson. They look like they will be ready for hockey soon. 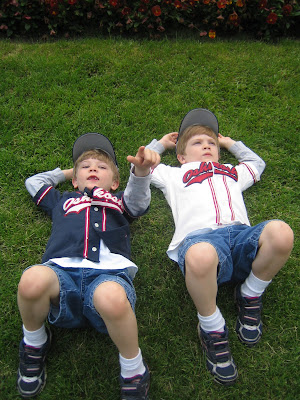 So that perfect night for baseball turned into a torrential downpour and lighting storm in the 5th inning. It actually worked out quite well and we went up to the broadcast booth to visit Roxy and watch the grounds crew attempt to cover the field with a tarp. The boys really liked the game but wouldn't have made it another inning or two anyway and we got to run through some deep puddles in the parking lot on the way to the car.

Happy Mothers day to all those mothers out there. We made it in to the game and the boys really want to get a foul ball. We are right behind the nats dugout so we may have a chance with the lefties. We may also get beaned by a foul tip as well. Beautiful night for a ball game.

I think I got blogged out last week in San Antonio. It's been tough getting back in the grove this week, except for Wednesday night when everything looked like a good picture. Anyway, we are heading to a Washington Nationals game tonight, courtesy of our friend Roxy, who is the voice of the Florida Marlins as well as the Cal Bears basketball team. I should have some pictures if the game isn't rained out but it looks pretty good at this point. Check back to tomorrow and I'll have some pictures of the boys for you.
Posted by Mark at 4:29 PM No comments: The masonic temple on the way home. I was able to smoosh the boys before they went to bed. I spent the day in an asae event working on senior managemrnt issues and had a nice happy hour with my fellow executive team memebers. A metro ride home is usually the result of a happy hour and this is my view tonight. Its good to have the metro as an option when I'm slightly buzzed. The boys and Nicole met my at the airport. It's good to be home and in nice 60 degree weather. The conention is officially over and my knee is aching and the dogs are barking. The members really seemed to like Soloso and are excited about how it's going to develop into a primary tool as part of their membership. I'm excited that I met my primary goal when I got hire 7 months ago. Still have lots of work to do but it's time to reflect on what we've accomplished and reflect on all the feedback we got the last few days. I'll start working on the next phase and the big board discussion at the September meeting in Phoenix on Monday.

I'm having a martini and some chow at the Palm right now and am heading to bed early tonight. 8am flight back to Nicole and the boys in tomorrow. The chapter host party was pretty good with fireworks to boot. I ended up at some nightclub with some of the younger crowd then a karoke bar with a bunch of aia folk. Tomorrow is going to be a long day. This is a huge party. Like 5 city blocks worth. Google booth at the AIA Conention Google booth at the AIA Conention
Originally uploaded by homerclees.

Crazy action on the convention floor. These are long days with late nights. The Soloso launch party was fun last night and we are getting tons of traffic to the booth. More pictures soon. Riverwalk
Originally uploaded by homerclees.
Posted by Mark at 3:44 PM No comments:

Southwest school of arts and crafts Southwest school of arts and crafts
Originally uploaded by homerclees.

This is a pretty cool location for a party but its hot down here in texas. Suit and humidy don't go together and I need some air conditioning. At the vip party

Walking all over a logo Walking all over a logo
Originally uploaded by homerclees.

AIA signs all over this town. Even the floor of the Marriott. Its a dreary day in texas but I'm here and have a couple hours to myself. VIP dinner at 6:30. You can't get this on the web yet but I thought I would give you a sneak peak at the home page interface. The board loved it this morning and I'm hoping we get similar feedback from the members this week at convention. I hope to be able to give out the url early next week assuming most of the kinks are worked out.