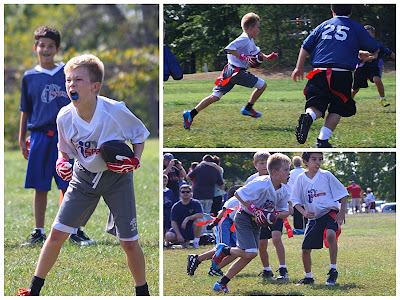 Dylan seemed to by ultra focused in his game yesterday and while his runs, catches and scores were impressive, he was also the first kid to be chest bumping his teammates for good tackles or offensive plays. He was all over the field yesterday with a "of course I can" attitude that he doesn't always have.
Posted by Mark at 10:39 AM No comments: Dylan promised me two touchdowns and a pick six and thats exactly what he did. A three touch down day in a 18-12 win over the Packers. Both boys tackled (pulled flags) well per usual and Sam threw some nice passes and had a 40 run to set up Dylan's first TD. Dylan also played 3 innings of a baseball game and walked once. The Timber Rattlers won as well. Proud of those monkeys. 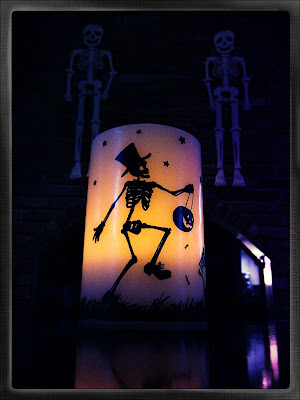 Preparation for the annual Halloween has begun and the ever expanding collection of stuff is finding its way to the walls and windows. It's not quite cold enough for a fire but that day is just around the corner. I can't wait.
Posted by Mark at 6:12 PM No comments: Sam also plays QB and has a pretty strong arm. He just needs to be more accurate. 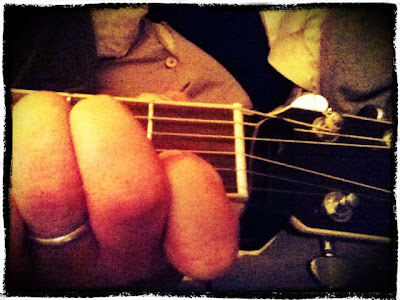 I took my first guitar lesson tonight and have a standing Wednesday appointment each week until I get my first gig, then it's so long day job and a life on the road. Well, maybe I'll just drink a bunch and entertain people in my living room.

I needed something hard to learn and playing guitar has always been something I wanted to do so wish me luck. What I learned in 30 minutes has already changed the way I see the world. Interesting how that happens.
Posted by Mark at 9:48 PM No comments: A Train
Originally uploaded by homerclees.

This is Sam on his way to his first touchdown on Saturday and as you can see the defenders are not quite the same size as Big Papa. This is the 3rd and 4th grade division so both Dylan and Sam have a pretty big advantage on most players. The average 60 pound 3rd grader wants nothing to do with a 120 pound speedster coming at him. Dylan is only about 85 these days but has more speed and some quick moves. It should be a good year if they can avoid breaking any bones. Dylan and I just hangin around and watching some football on a very fall feeling kind of day. The whole family spent an hour and a half at the baseball field, hitting, pitching and taking some infield practice. Dylan keeps working on his game and I love to see it. Sam was looking pretty good out there too but he keeps swinging for the fence at the plate and that will cost him in the long run. 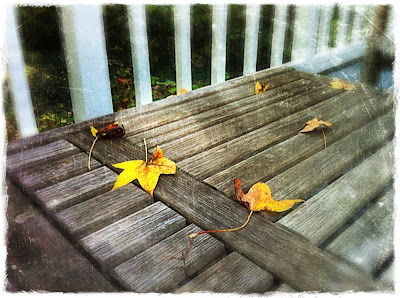 The trees are beginning to shed, little by little.
Posted by Mark at 12:31 AM No comments: 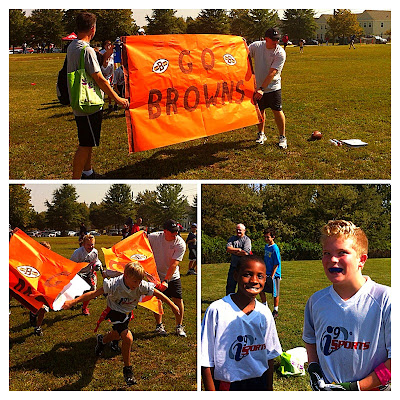 A successful sports day with Sam scoring two touchdowns in a 24-7 Browns victory and Dylan's baseball team traveling to Herndon to beat the Orioles 12-6. Dylan walked a couple times and struck out but played hard and scored a run. We celebrated by going to Lucky's for lunch and video games. I'm worn out.
Posted by Mark at 6:27 PM No comments: 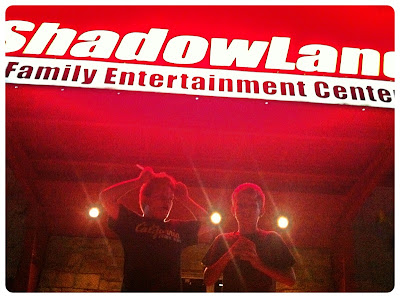 The boys went to another birthday party at ShadowLand. They have had their last two parties there and know the battle maze pretty well. Dylan split his lip at school today so he has been a little out of sorts and needed to come home early but they had a good time regardless. Football and baseball games tomorrow.
Posted by Mark at 8:36 PM No comments:

Dylan had hitting practice today and Sam came with us because Nicole is out of town. The days are getting shorter pretty quickly and the afternoon sun is getting really low in the sky. We may see shadows like this on the snow in a oriole months if we're lucky. 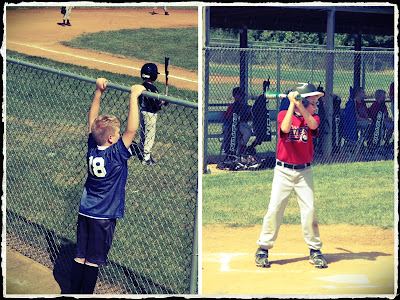 For the first time ever, Sam is watching his brother play from the stands. This is actually good for him and he has been great about cheering his big brother (1 minute younger) on. He does whine a little about wanting to play and he basically claims he could hit a home run at every at bat but I feel like he really wants his brother and best friend to succeed.
Posted by Mark at 6:48 PM No comments: 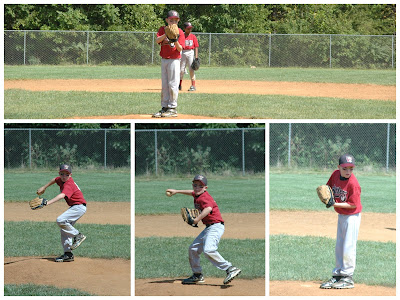 Dylan did really well on the mound for the first time and while his first four pitches were balls, he gained a ton of confidence with his first strike and managed 2 strike outs, two walks and he fielded a hit and threw to first for the last out. He also gave up two walks and a run but he was also pitching to a kid that was catching for the first time. He was really pleased with himself and it showed. Sam stole most of Dylan's self confidence at birth and now is overly confident while Dylan struggles to believe in himself. Today he showed himself that he is good enough.

Sent from my iPad
Posted by Mark at 7:02 PM No comments: 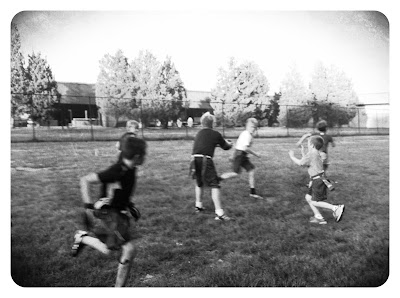 Another Thursday and another football practice. The fall sports are in full bloom right now.
Posted by Mark at 6:47 PM No comments: 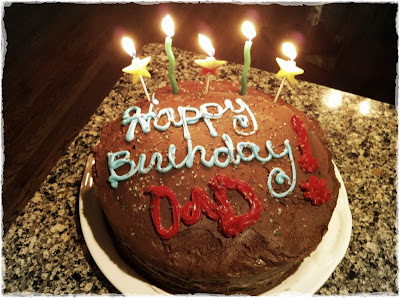 Had a very nice birthday with Nicole and the boys. Another year and it's keeps getting more fun. First game of the season and Dylan's Timber Rattlers beat the Iron Pigs 16-1 in 4 innings. The fall season is shorter with no playoffs but this is a good start. Dylan struck out twice and walked once but he was swinging which is an improvement over this spring. He play really well in the field and came away from the game pretty positive. Little by little the color is coming out. Flag football practice is in full swing and the NFL is back on the field. My favorite season is unravelling in front of me every day. I have not watched any of the convention coverage but I like what I've heard from Michelle and Bill. Quite a contrast from that other convention. "I built that" vs "We are in this together". I know which one resonates with me.

Dylan had another baseball practice last night and I had to drag Sam with me until Nicole could pick him up.  He got all mopy because he realized that it was fun to play ball and he felt left out.  He really got depressed when I told him he would have to come to games and cheer on his brother and friends a number of times this season as well.  Both boys are playing flag football this fall but Dylan, coming off a horrible spring baseball season wanted to play fall baseball.  Sam was hitting the cover off the ball all Spring and had a pretty successful Spring season.   Sam also didn't seem that interested in Fall baseball and in an attempt to keep some stress off his injury prone legs, we decided to stick to one sport at a time for now.

I like that Dylan is getting to play on a team without his brother who usually gets all the attention because he is a little more athletic at this young age.  I really like that Dylan wanted to go back at the game after having a sub .050 batting average in the Spring.  It shows he is not afraid to try and fail but get back up and try again.  With Sam not playing, Dylan can focus on himself and not try to match what Sam is doing.  Sam on the other hand needs to learn to support his brother more and help him gain the confidence he is missing at times.  Athletic success comes too easily for Sam and I'm afraid he gets lazy because of it.

They are both ultra competitive little boys.  I'm not sure where they got that.  It will be fun to watch them play this Fall but it will be another season of cringing in the stands and wanting to jump on the field to help them succeed.  I'm going to have to learn to employ Buddhist chants to stay centered.
Posted by Mark at 8:24 AM No comments: The first day of fourth grade went well today and the boys like their teachers. The homework was pretty basic for the first day. I'm sure things will get more challenging soon. We spent a couple hours at the pool today. It's the last pool day of the year and everything was being put away and readied for winter. It's not that we won't have a few more weeks of pool weather but all the lifeguards are going back to school tomorrow like Dylan and Sam.

Tony and Bill left at the crack of dawn this morning and we all miss them already. The boys finally got some quality time with them and had a great time. We need to plan a visit to LA soon.

I've been seeing turning leaves here and there and found these in the yard. We are still a couple weeks away from official Fall but it is feeling more like it with the pool closing, school starting, leaves turning and a cord of wood being delivered. My favorite time of year has begun. The Uncles
Originally uploaded by homerclees.

...via PhotoToaster, using these settings.

It was rainy today so we went up to the Udvar Hazy Air and Space Museum for some aircraft viewing. The new addition was the Discovery shuttle that replaced the training shuttle Enterprise. Discovery was actually in space a number of times. We've been having fun with Bill and his wife Tony. Out for dinner itch Tony and Bill. Pictures of them tomorrow.