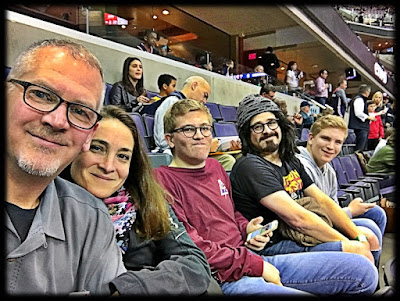 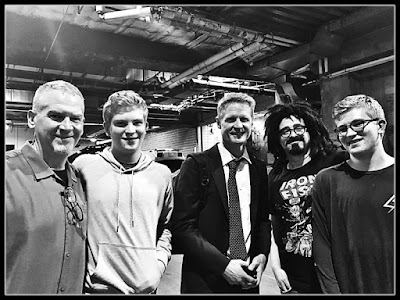 Warriors lost this one but it was a great game. The boys got to meet coach Kerr after the game and ran into a couple of the players as well. Uncle Adam knows how to spoil those kids.
Posted by Mark at 11:31 PM No comments: 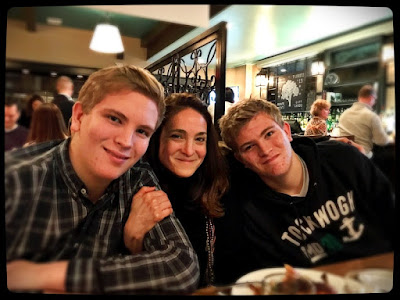 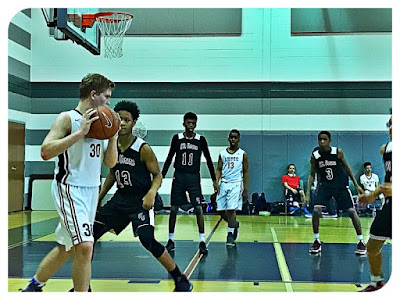 The Patriots dropped their first playoff game to a team they had beaten 5 times in the last few years. 3 times this year alone. Besides missing the three amigos, the remaining crew were not shooting well and getting some bad bounces. It was a disappointing end to a promising season. The boys are disappointed that the 4 years of LMVSC Patriots is over. They will be playing against some of their teammates in a High School the four years.
Posted by Mark at 2:08 PM No comments: 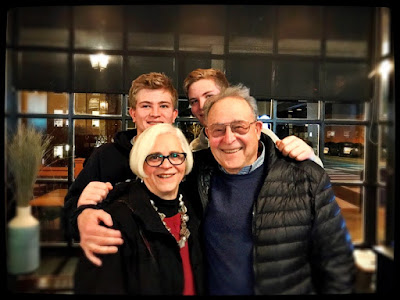 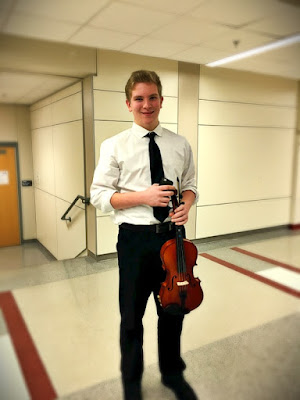 The days of strings are fading. He looks good holding a viola, maybe he will reconsider.
Posted by Mark at 7:18 AM No comments: 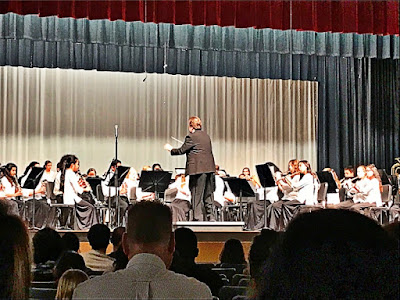 Counting down the number of concerts left for Dylan in band. Neither boy seems interested in continuing the music education in high school. They may change their minds.
Posted by Mark at 8:11 PM No comments: 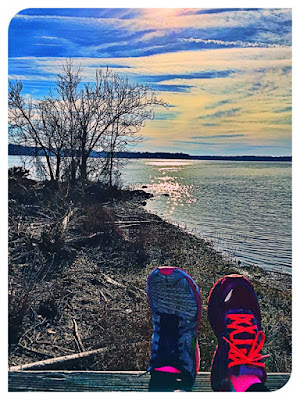 Nicole and my phones dump photos into a shared photo stream. I'm always getting pictures of shoes against nature or monuments. I filtered this one a bit and found it interesting. I guess it's a mom's run this town thing to post pictures of shoes.
Posted by Mark at 10:19 PM No comments: 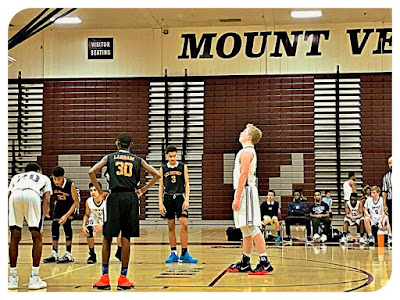 Both boys played well but were frustrated with the whole situation.
Posted by Mark at 9:02 PM No comments: 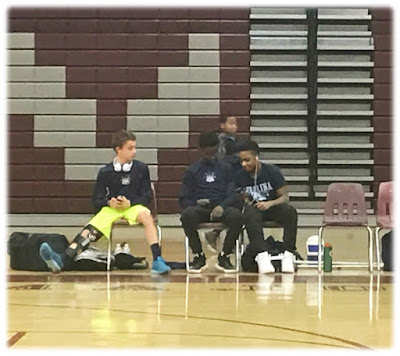 We were actually down to six kids today with one still out with the flu and another with an ankle issue. The remaining six played well but were pretty winded by the end. We lost but not as badly as I thought it would be. 59-46.
Posted by Mark at 8:50 PM No comments:

Well, I'm finally recovering from the sickness Sam passed to me on Monday. Sam caught a really good bug at Cotillion a week ago Wednesday and missed three days of school and a basketball game. I thought he was faking at first but it caught me on Monday night and beat me until yesterday afternoon. Nicole and Dylan seem to have missed out.

We lost a third player to a season ending injury this week. It was a knee this time. Now we have sustained, tibia, vertebrae and knee injuries to this cursed team. We had a game today but we were down to 7 kids because Marcus had the flu. The remaining kids hung in and played great ball but lost. We have one more regular season game tomorrow that would be good to win but can make the playoffs with a loss by two different teams tonight.

Sent from my iPad
Posted by Mark at 5:50 PM No comments: 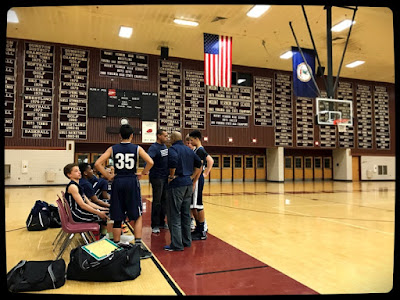 The Patriots were down 4 players today, including Sam with a 101 temp. It recall was a must win game against Herndon and the remaining 7 played with purpose winning 52-36. Dylan played really well and had a lot minutes. Everyone was passing aggressively, driving to the hoop and shooting well. They also played team defense on a team that traditionally shots extremely well beyond the arc. Things were definitely going our way when Braylon hit a first half buzzer beater from our own three point line. A 3/4 court shot. It was wild.
Posted by Mark at 5:39 PM No comments:

I got a new car a couple weeks ago and non or you will be surprised, it has all the latest technology on it.  In fact, maybe too much but it has been fun to start using.  I've been back the dealer a couple times and spend a bunch of time talking to Volvo support to get things working properly but after sitting in the XC90 with a technician, we finally got everything working and communicating to all the services it grabs from the cloud.

One thing Dylan and I tried today was the pilot assist feature.  It's an autonomous driving mode or driver-less car capability. The computer will get the speed limit from the internet database, the cameras and distance sensors will read the road and environment and I can take my hands off the wheel and it will steer it's way down the road.  It sounds cool but it's a little freaky when you are in a curve in the road and cars are coming at you.  It stays in the lane and follows the curve but you can't help but to have your hands about four millimeters away from the grabbing the wheel.   It won't steer it's way to a destination with turns but will read a stop sign, red light or car in front of you.  Fascinating thing but slightly scary and may not be used much in my case.

Great car anyway.  Those Swedes know what they are doing. 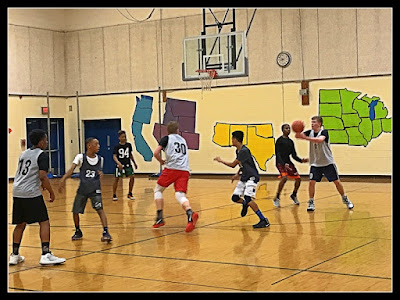 What's left of the team had a lot of energy at practice tonight. We lost another kid for the season to a back injury. Melvin is one of the boys good friends and a great player. It's a shame he will be out the last few games of this teams history.
Posted by Mark at 9:41 PM No comments: 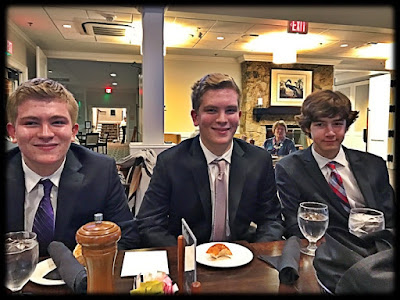 We missed the winter ball but the boys were back to learning some manners tonight. They have three sessions in March and they are thrilled.
Posted by Mark at 9:46 PM No comments: 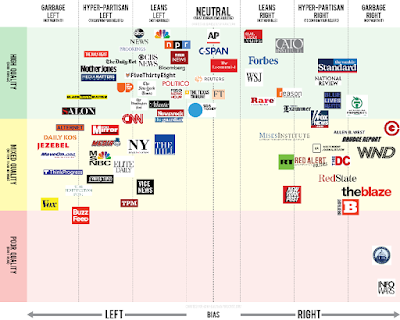 I need to remember what is worth reading and this seems pretty comprehensive. 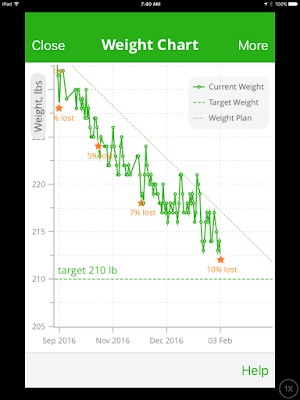 I've been tracking my weight since September when I was about 240 pounds. I had lost about 25 during the summer, before I knew I was diabetic. I weigh 212 today and I found out my A1C was 5.5 at my annual physical this morning. The A1C is a 90 day blood sugar marker that was 10.3 in September. (Normal is 4.8 to 5.6). All my cholesterol numbers were in the healthy range, which hasn't been the case in a couple decades as well.

How much of this is changes in diet and weight loss or the introduction of new drugs is unknown. I did drop one of the diabetes control drugs a month ago with no downsides. I'm hoping to drop more in the future.

Weekends tend to cause a little weight gain but I can't be good everyday. Time to open some wine.
Posted by Mark at 5:16 PM No comments:

January marked my lowest blog post total in a long, long time.  I try to keep writing and sharing pictures on this thing to remind myself of everything that's going on in our lives and provide a source of joy in the future as I flip back through the years to remember all the fun things I've done and witnessed.  It's a sort of memory keeper, a diary, a blog and requires some discipline to keep it going.
January 2017 is a sorta dark month in my opinion and it has been hard to get myself to post many days.  The election and inauguration of Trump has been a definite downer, a stain on the march to enlightenment and progress towards caring and just society.  The cloud of anti intellectualism and fear is dampening my spirt and making it harder to post the little things that make up life.  That needs to end.
January has also been rough on the kids sports arena.  Their basketball season with so much promise but has turned really rough due to a injury.  The team lost a team leader and all conference point guard to a broken leg early in the month and have had other injuries that have made it very tough to compete.  It's just a game but wins definitely raise to spirt more than losses.  The season is almost over and we can now look forward to flag football and soccer which offer a fresh start and endless possibilities.
While the month will be remembered for some less than stellar events, it is important to remember the things that were nice about the month.  First off, my campaign against Diabetes is going really well.  I was able to drop one of my medications on January 1st and have not seen an increase in blood sugar levels.  This is one of 5 medications that I was prescribed when first diagnosed in August and I will continue to try to drop a couple more and reduce the amount of a couple of others over time. I also made my weight reduction goal I set for February 1st.  I've lost 52 pounds since this time last year and weighed in at 213 yesterday (2 pounds better than my 215 goal)  My next goal is 210 by April 1st and then somewhere near 200 this summer.  I'm eating better and have added a little more exercise to my already daily exercise habit.  I feel better too, Diabetes is the healthiest disease I've ever had.
I also took delivery of a new computer, I mean car.  I got a Volvo XC90 last week and it is the most technologically advanced car I have ever owned but like a computer, it has some bugs that I'm still trying to work out.  It does have every bell and whistle available on it and it really is a great car to drive. Once I get all the technology issues addressed, it will be awesome.  I have always understood that being on the leading edge of technology innovation has it's costs but I'm learning from trying to fix the fairly frustrating issues.  I have heard that Swedes have always been a little temperamental, Swedish cars included.
So, heres to February and the march towards spring.  We have a lot of good thing planned and I'm going to get back to writing and adding pictures to this diary that I've been keeping for nearly 13 years.
Posted by Mark at 8:41 AM 1 comment: