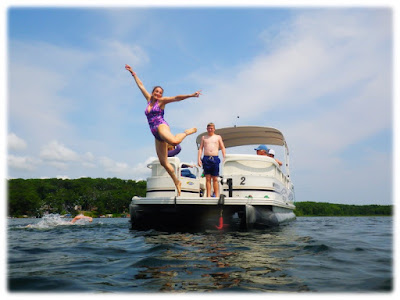 Not just a little, but a lot of grace.
Posted by Mark at 6:05 PM No comments: 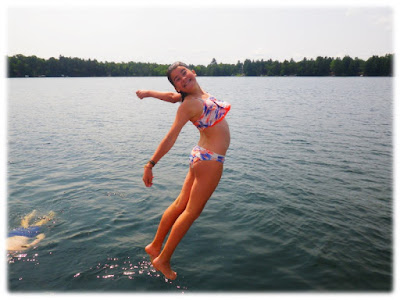 More jumping into the lake from the pontoon boat today. We didn't catch as many fish but got some good pictures. We also broke down about as far away from the resort as we could and had to be towed in. It was still a nice ride.
Posted by Mark at 6:00 PM No comments:

Shooting Fish in a Barrel 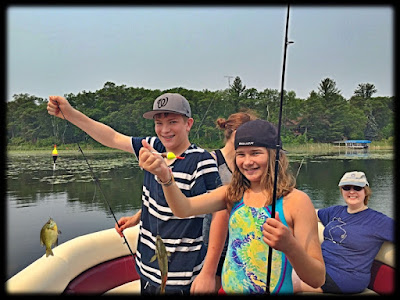 Whatever that means but in general, their was a fish on a line every few minutes. That kept grandpa very busy since none of these kids will take the fish off the hook, or put the bait on for that matter.
Posted by Mark at 6:56 PM No comments: The fish were biting today and the water was refreshing. Sylvan Lake is providing a ton of fun.
Posted by Mark at 6:38 PM No comments: 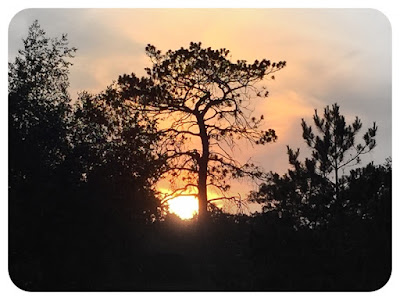 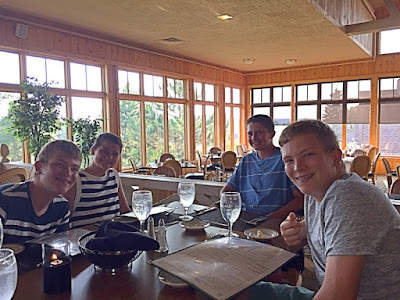 The first night dinner always seems to be at Maddens, which is probably the closest restaurant to our resort. It's a nice spot and the cousins were mostly behaving.
Posted by Mark at 11:36 PM No comments: 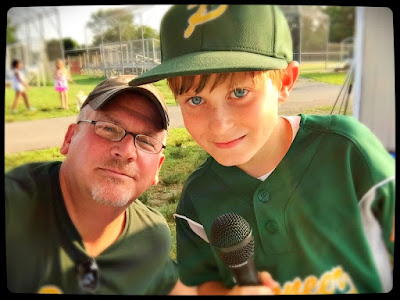 Me and my press box partner at the district game on Friday. I played the walk up music and he announced the batters. We made a good team.
Posted by Mark at 11:43 AM No comments: 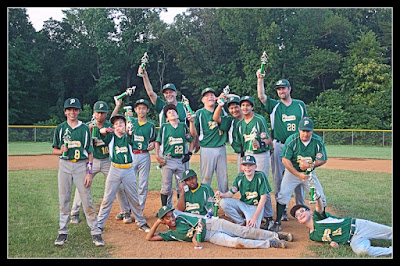 Well, the Pioneer Legends won the district tournament and are heading to the state championship tournament in Chesapeake Virginia. That's south of Norfolk. We won tonight's game by one run again and Dylan got a couple nice hits after being in a slump the last couple weeks. He's a hard worker and never stops trying. I'm proud of the bugger. Sam too..
Posted by Mark at 12:10 AM No comments: 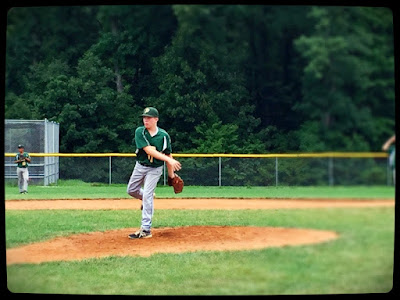 Our third baseball game this week was tonight and Sam pitched a six inning win for the Legends. I believe he had 7 K's and allowed 7 runs, a couple of those were fielding errors, so a pretty good outing. He also threw 7 pitches and struck out two in relief in the All Star game on Wednesday. The boys won that game too. Dylan is in a little hitting slump but is playing well in the field. Sam is actually in a little hitting slump too, they get another chance to hit tomorrow night.
Posted by Mark at 9:54 PM No comments: 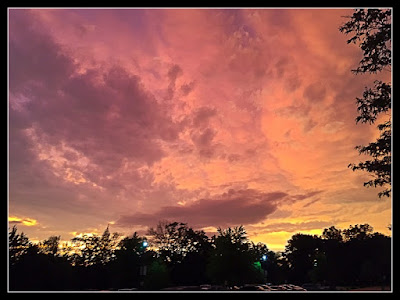 The baseball All Star game was postponed again tonight due to more storms rolling thru. That postponement freed us up for a Patriots basketball game against Burke. It was looking rough in the first half with some sluggish play, a ton of fouls and a lot of missed shots. They were down 35-17 at the half but came roaring back with a 33-5 second half to win 50-40 in overtime. That was an intense game.
Posted by Mark at 10:46 PM No comments: 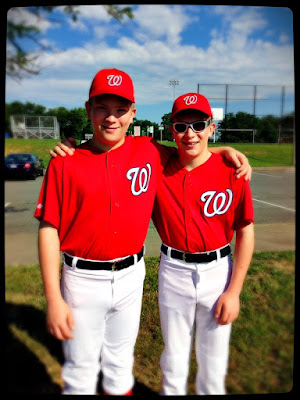 Nationals baseball camp started today. They have a full week of camp and four baseball games at night, not to mention the basketball game on Wednesday. They will need a vacation after this.
Posted by Mark at 10:42 PM No comments: 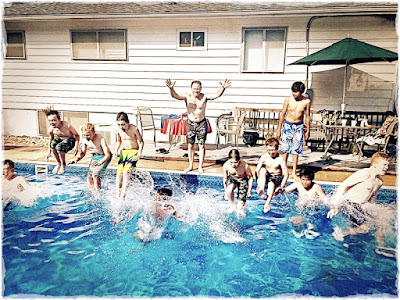 The season ending party was today at coach Johnny's house. The after season parties are way more fun when you won it all. No talk of what would have happened if..., etc. Just talk of how we won and how all the kids contributed to the success. Good times.
Posted by Mark at 9:22 PM No comments: 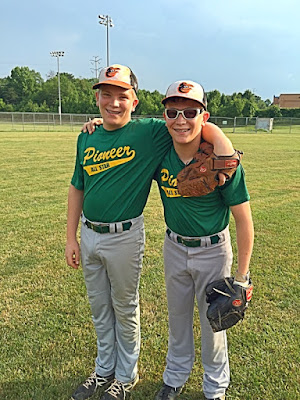 Big, loud storms rolled in this evening and postponed the All Star game until Tuesday night. The kids were all warmed up and ready to go until the skies opened up and all fury was unleashed. We did end up in the basement for 45 minutes due to a tornado warning but we've mostly seen tons of rain, load thunder and some really bright lighting.
Posted by Mark at 10:04 PM No comments: 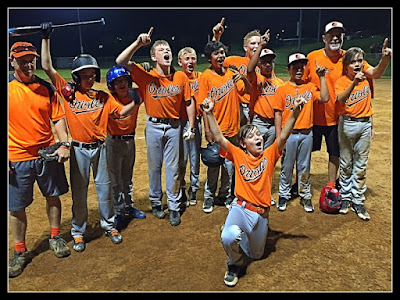 The third time is the charm. We had been in 3 championship games in the last four years and we finally won it. It's was a tense 7 inning affair that finally ended after 3 hours and a 30 minute rain delay. Sam pitched well, hit a home run and caught. Dylan played first, hit two singles, one to extend the game to go into an extra inning. It was a hard fought game. We came back from a 6-2 deficit and led at one point by 4 but the Braves came back and tied it.

It was a tense and exhausting game for everyone.
Posted by Mark at 12:36 AM No comments: 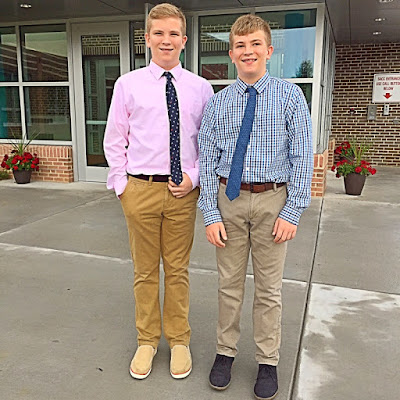 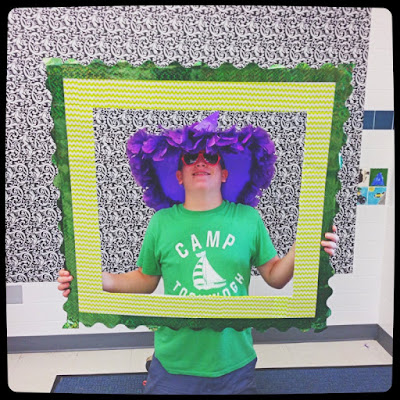 I don't know what this is all about.
Posted by Mark at 9:52 PM No comments: 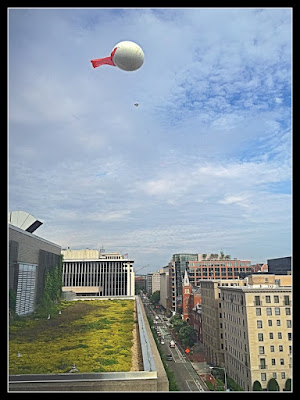 This balloon with cameras was floating over our building this morning when I got in. It was tethered to a truck down on the street and it went up and down a few times. Not sure what they were photographing but I hope it wasn't me.
Posted by Mark at 9:48 PM No comments: 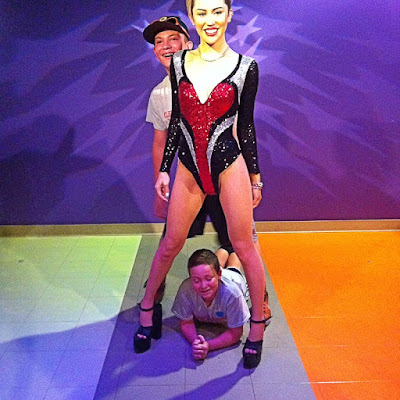 They learned a ton during the 6th grade field trip on Friday. I'm still trying to figure out what the takeaway from this moment is.
Posted by Mark at 8:11 PM No comments: 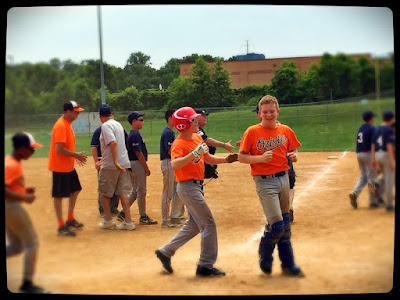 The little O's pulled out a team effort to beat the Red Sox 12-5 and advance to the league Championship game next Friday night. Sam pitched 3 innings, struck out 5 and allowed 3 runs. He almost hit the cycle with a single, double and triple. Dylan was 1-3 but got his bat on the the ball and in play each time. He drove in 2 runs and played perfectly at first base and center field.

The team played well, had few errors and Zack closed out the game, only allowing two more runs. We don't know who we are playing next but it should be a good game.
Posted by Mark at 4:32 PM No comments: 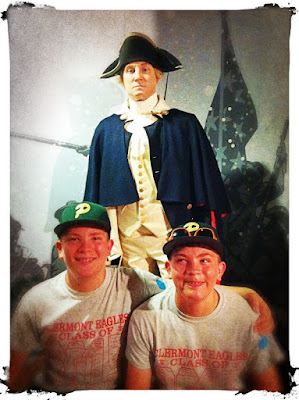 The sixth grade field trip was today and they visited a number of sites in Baltimore. They were skeptical about the whole thing but had a great time.
Posted by Mark at 10:49 PM No comments: 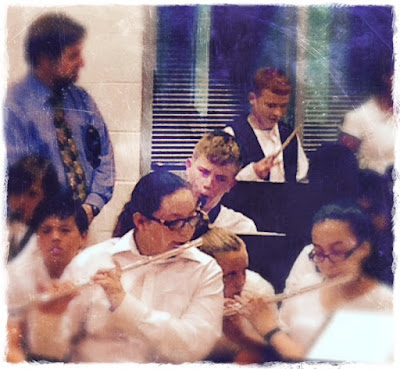 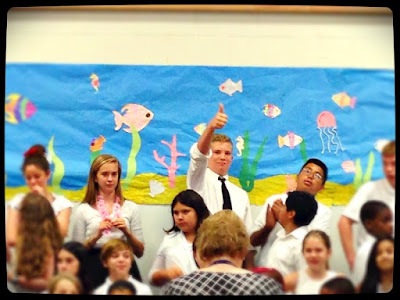 I can only assume what the theme was for last nights band, strings and chorus concert. I missed it due to a work event I originally cancelled two weeks ago so that I could attend a little Orioles game that Dylan was the starting pitcher. I don't miss many boys activities and there are a lot, but I didn't miss sitting in a hot gym for two hours.
Posted by Mark at 10:08 AM No comments: 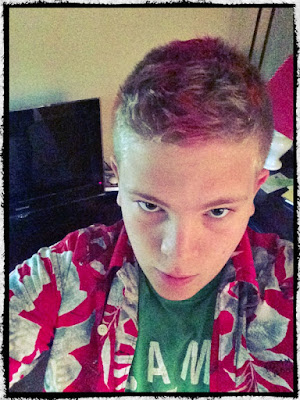 Sam colored his hair and wore a Hawaiian shirt. He's wacky.
Posted by Mark at 8:13 PM No comments: 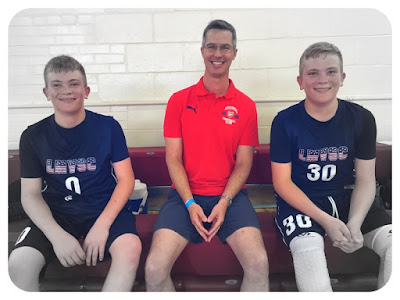 The boys played three games today and Mike came to visit. The little O's won their baseball game against the Red Sox 8-6 with each boy hitting doubles, walking and striking out. They clinched the second seed of the playoffs and a first round bye. The also won two basketball games against a couple AAU teams this afternoon.

Again, the boys played well and the team was really in sync. They both had 6 points in game one and dozen or so rebounds as well as some fancy passing and a minimum of 6 assists. . Sam had 6 in game two and Dylan had a couple with a dozen rebounds, assists and steals.

An overall great sports day for the boys. Fun to watch.
Posted by Mark at 12:09 AM No comments: 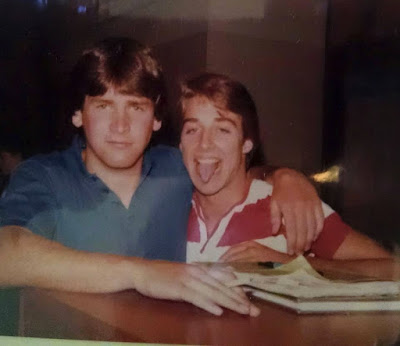 This was posted on Facebook the other day and it reminded me that I've known Rob Porte since kindergarten, making him my oldest friend. I wonder if any of the kids Sam and Dylan know from the grade school they will be leaving in a couple weeks will still be buddies in 38 years.
Posted by Mark at 9:58 AM No comments: 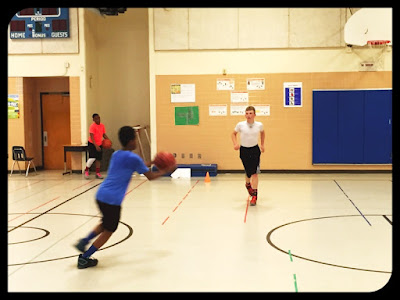 The Patriots had try outs and added a few players for the summer season which is starting soon. Sam was home tonight nursing some shin splints but Dylan was working hard. Basketball never stops.
Posted by Mark at 9:56 PM No comments: