Walking by the Whitehouse this morning and found a very lively bunch of folks protesting the Chinese crackdown in Tibet. It's a pretty grey day but the flags and cherry blossums brightened things up quite a bit.

Mostly because my week was really un-interesting, unlike my typical crazy exciting weeks. ;-) Anyway, we didn't do a lot all weekend and if felt good. I actually spent most the weekend getting a new computer all ready to go for the family room. It was time to upgrade the computer we use the most in the house and take that one downstairs to be abused with new experimental software and crap like that. The new computer is bad ass and hums through all sorts of applications at rocket speed. Pretty cool for a geek like me.

Sam, Dylan and I played some catch with a football out side for a while yesterday. Sam seems to like to throw and catch the ball while Dylan just wants to run it right at me. I can't tell if he's a fullback or linebacker to be but it's all about the hitting and tackling for him. Sam seems to like the finesse play. Either way, I'm going to have a knee blowout sooner than later based on yesterdays workout. I felt the knee move a couple times trying to avoid being tackled and moving quickly to catch an errant pass.

The boys and I also watched the Counting Crows Private Sessions show on Sunday morning. They have seen a lot of Uncle Adam on tv the past few weeks and were talking to him yesterday saying "what are you doing there, come see us" funny stuff. I'm sure they would be happy to blow his bad knee out as well when he stops by next. Sucks getting old...
Posted by Mark at 9:07 AM No comments:

I've been using the back scratcher Nicole got me recently as a prop in a story about Le Claw (complete with french accent). It's the same old parked in the dark woods and you hear something scratching at the car story you've heard a million times but this one all ways ends up with "Le Claw" attacking them. Tonight's story had us all at the drive in movie and Le Claw coming out of the trunk. I love when they laugh uncontrollably and this story has had them in that state the last few nights. The side benefit being that I've convinced them to Le Claw my back every once in a while.

Adam's new record came out on Tuesday and in case you missed it, they have been on Good Morning America, David Letterman, the View and this Sunday on an A&E show called Private Sessions. Lots of good reviews out there and a nice piece in Rolling Stone about him and the band. Dylan and Sam were happy to see their names in the liner notes of the album and are looking forward to getting up on stage for Hangin Around this summer. I'm tired, time for bed.
Posted by Mark at 9:02 PM 1 comment: 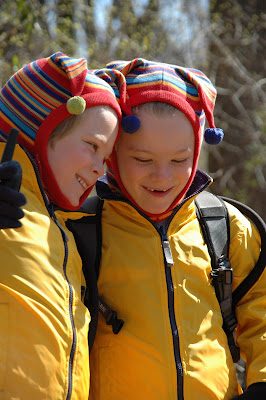 We headed out on a short hike around Roosevelt Island today to get the blood moving and then had our annual Easter Egg hunt. We didn't have Joseph and Kumie to join us this year but it was still fun watching the boys run past the most obvious eggs in all the excitement. I posted all the pictures to flickr once again.

The Happiest Place on Earth 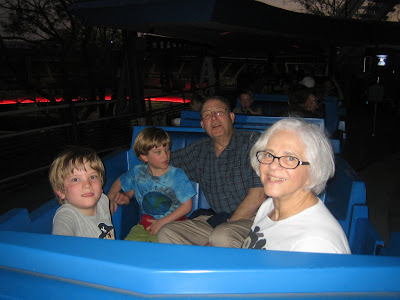 Or something like that is the idea. I finally posted the Disney World pictures I promised earlier this week. This one is of the Grandparent and boys on the Tram of Tomorrow. It was the Tram of Tomorrow the last time I was at Disney in 1978, I guess tomorrow is a long ways away. Enjoy.

I split up the hundreds of pictures we took over the last 6 days into the Space Coast set and the Orlando\Disney World set. The video above and these pictures are from the Kennedy Space Center, Melbourne Beach and the go-cart track in Melbourne. I think we are all glad to be home and in our own beds again. The boys were exhausted and went to bed at 7:30 tonight and I think I could use a little sleep as well. Back to work tomorrow and some NCAA basketball this weekend.

It was great spending so much time with the boys the last few days. I really got used to spending whole days with the little rascals and I'm going to miss that when I'm gone for 8 to 10 hours each day during the week. Oh well, the weekend is right around the corner.
Posted by Mark at 8:51 PM 1 comment: Early flight home with lots of good micky memories in tow. Yesterdayat the park was madness and we exited before we could do everything the boys wanted to do but mama, grandpa and me had had it. Had a nice dinner at portofino and back to the hotel for an early bed time. Looking forward to getting home.

Its a Small World Its a Small World
Originally uploaded by homerclees.

But a long and boring ride. We'e been on it three times now and never again. Out for a night without the boys. They are with Linda and Gil at the Rainforest Café and we are having a grown up dinner. 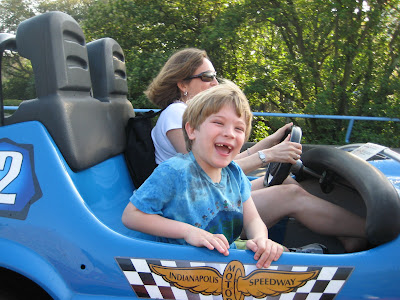 We got there early to do as many rides as possible before it got too crowded. The Buzz Light Year ride seesm to be the favorite while Big Thunder Mountain is a close second. We had dinner last night in downtown Disney and went straight to bed in preparation of lots of walking around and moments of nausia. Good thing we did, we came back to the hotel for a swim and are heading back to the park for some night time fun later. 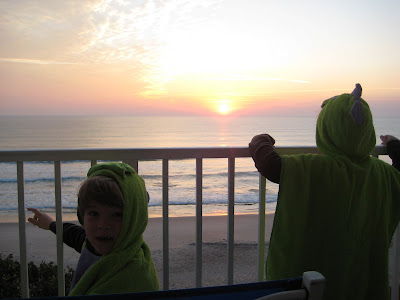 We got up early today to watch the sunrise over the Atlantic and make some wishes. Sam wished he was a dog and Dylan wished for a Commuter Airplane that was electric. I just wished they'd be my best friends forever. Off to Orlando in a little while with a stop to ride some go-karts on the way. 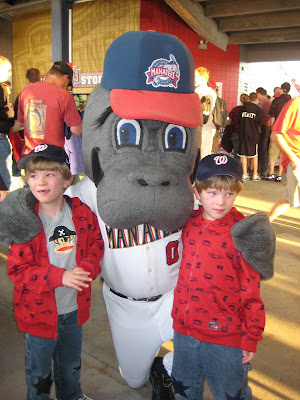 We had seats in the first row, right behind home plate for the Washington Nationals spring training game against the Marlins last night. We left a little early because the boys were getting tired but it was a nice night but their was very little scoring. The only run we did see was a runner, catcher collision at home for the Nats only run of the game. You could hear the bones crunch, which was exciting. 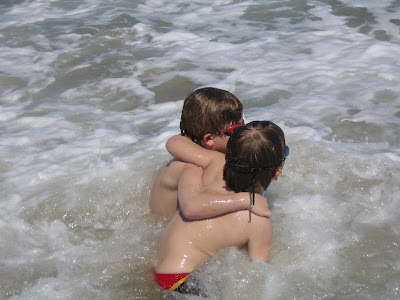 The sea was angry that day my friend. Actually, just enough surf to get the boys all worn out. We spent most of the day in the ocean or pool and the boys loved learning how to do a little body surfing. I'm still working on uploading a bunch of pictures to flickr, maybe tonight, after the baseball game. 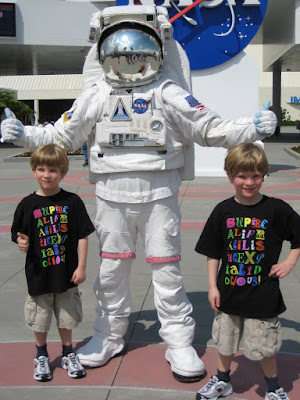 Up at 4am, flight at 6:30, Kennedy Space Center by noon and the Atlantic and pool by 4pm. We are getting ready for dinner now but I don't think I can handle anymore excitement. I got some really cute pictures of the boys running in and out of the surf along with some short video I'll share later. It's good to get away.
Posted by Mark at 5:48 PM No comments: 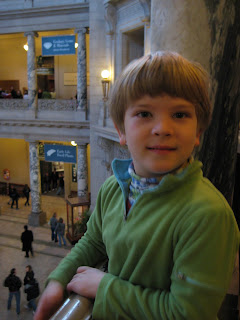 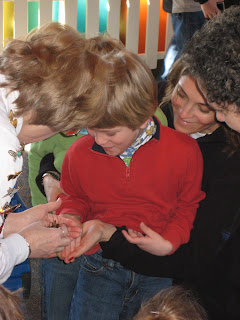 We took a trip downtown on Sunday to visit the Dinosaur museum. The boys have been there before but it was cold and wet so an indoor outing was the right call. I know it's been a couple days since I took these pictures but we've been running around trying to tie up all the loose ends at work and get ready for our trip to Florida. The boys are in bed but not sleeping because of all the excitement. Nicole and I are packing away and trying to remember everything we need. It's going to nice to get away for a few days and lose myself in the excitement of 5 year olds at a minor league baseball game, in the surf, running around rockets and of course at Disney World. I'll be sure to post often.
Posted by Mark at 9:15 PM 1 comment: And we are currently watching Power Rangers Dinothunder Volume 3. This whole series is so rediculous but the boys love it. It is windy as hell here right now and I'm half expecting one of the dozens of trees in the yard within striking distance from the house to come crashing down. Then again, if we lost power, I wouldn't have to watch dinothunder any longer. Hmmmmmm. The yard is starting to come to life after a couple 70 degree days. Its going to get cold again but the plants always seem to get tricked this time of year. 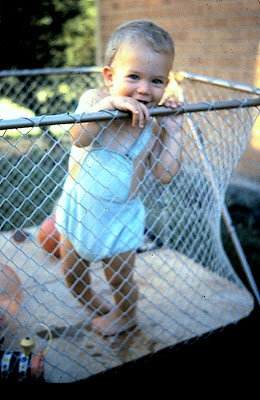 I also look like I need to be changed. My Mother has been digitizing old slides she has laying around and has sent me a couple. I thought I would share a time when I actually did look innocent.
Posted by Mark at 8:48 PM 2 comments: Its our 7th anniversary and my these are my gifts from Nicole to take care of any issues. We had a nice dinner at Overwood with the boys tonight and we are all worn out from a long monday.

Here are the pictures I promised from yesterdays parade. We ended up seeing Charlie and Sophia from the boys old pre-school along with their parents and siblings. It was a chilly morning and we were on the dark side of the street so the we were even colder and the pictures didn't have a lot of good light. The morning did include a classic car show and a dog show. As well as some green bagels from bruggers.
Posted by Mark at 10:13 AM 1 comment: We came into old town today for the st pattys parade and are having lunch at King Street Blues now. Its chilly out there but I got a ton of pictures i'll get up on flickr soon.