Not much happening on this last Sunday in September. The games of Saturday are fading and we had a nice dinner with Julie and Damon last night. I did take the kids up to the park to work on some quarterbacking, receiving and pass coverage skills. Not a lot of time outside but Sundays are made for chilaxing a bit. The boys worked hard yesterday and even their little 10 yer old bodies need a break. Based on Sam's performance on the football and soccer fields, his knee injury seems to be behind him. In re-calculating his performance i realized that he actually had three touchdowns and three goals in the soccer game. The third touchdown was a pass to Corbin which is added to two running touchdowns. He was on fire yesterday. Let's hope he brings it next week and Dylan scores his average td's, which is more than the one he had this week. Not that one TD and two interceptions in a game is bad, he's just better than that.

Sent from my iPad
Posted by Mark at 7:24 PM No comments:

The boys had a soccer game at 10:30 and a football game at 11:30 today and while they both contributed quite a it, both games were losses. Sam scored three goals In a 4-3 loss in soccer. We had to leave that game early to get to the football game which was 15 minutes away. Dylan had some nice shots on goal but couldn't connect while Sam was on fire, dancing around with the ball for three really nice goals.

The football game was rough. We lost to an inferior team with a real jackass of a couch because the boys were sloppy and not at the top of their game. Sam had two running touchdowns and was looking pretty good while Dylan had a TD reception and two interceptions in a 32-24 loss. The Tigers have a few things to tweak this week in practice but I like their chances.

We have Julie and Damon over tonight. It's a perfect night for the screened porch which is hard to come by in these parts.
Posted by Mark at 9:03 PM No comments: 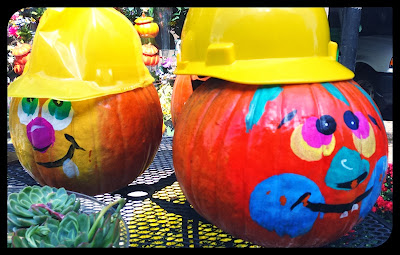 The florist on M street is gearing up for Halloween flowers and plants with these two hard hatted pumpkins on display. He has a new building going up next to his shop. We are starting to decorate the house for the Halloween party in a few weeks. Probably my favorite holiday, but Christmas may beat it out.
Posted by Mark at 5:48 PM No comments: 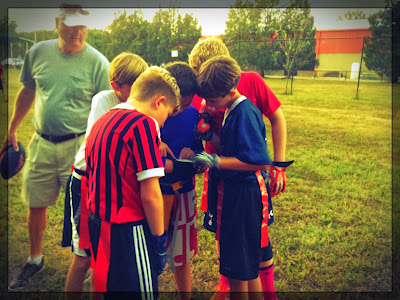 Dylan and Sam gathering around to plan the next play. Thursday is a 5:00 pm soccer practice and a 6:00 pm football practice. They worked really hard at both of them and I was very proud. I like when they practice as hard as they play. They have a soccer and football game on Saturday. I hope they have good games.
Posted by Mark at 10:22 PM No comments: 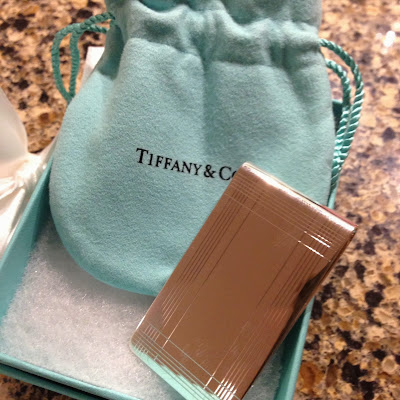 My replacement money clip arrived today, so I'm back to having everything I had pre-robbery. The old money clip was just like this one but a few years old so not as shiny. Hopefully I can hang on to this one for a while.
Posted by Mark at 9:27 PM No comments: 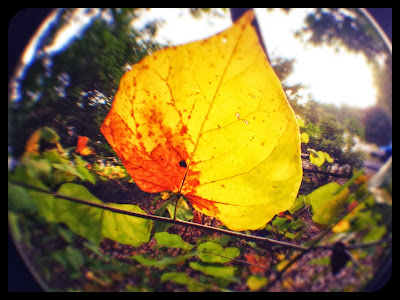 The vernal equinox arrived on schedule at 4:44pm ET and we are now solidly marching towards winter. Not many trees have turned around here but a few are starting to show signs of color. In other news of seasons changing, Nicole and I met friends in old town for dinner last night and left the boys in charge of themselves. We were only gone 2 and a half hours and got home around 9:30 to tuck them into bed. Nothing bad happened and they actually called us twice to check in and see when we were coming home. Dinner was fun as well.
Posted by Mark at 5:48 PM No comments: 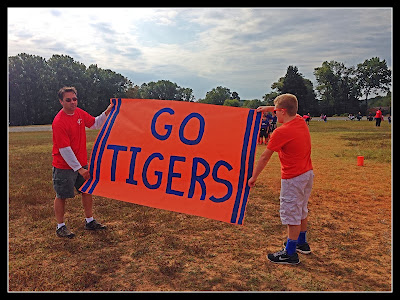 The Tigers had their pre-season warm-up game today and came away with a 14-14 tie. It doesn't count on the record book and Coach call only pass plays to get some of the kids some quarterback reps and see who can throw. Sam did not play due to a knee injury that we are working on fixing. He should be ready for next weeks opener. Dylan had a typical Dylan day with two interceptions for touchdowns and threw a 2 point conversion pass to Corbin. The offense struggled a bit and I think they missed Sammy's arm and they definitely missed his defensive skills. It looks like the tigers will be pretty good this year.
Posted by Mark at 6:08 PM No comments:

Fourth Time is the Charm

The boys both won their SCA (student council) elections today for the first time in four tries. They have been running since 2nd grade and finally got the most votes in each of their classes. It's great that they both won in the same year but even better that they didn't give up. They've already hatched plans to run for President and Secretary for 6th grade which is nice since they had some crushing defeats for VP and Treasurer last spring. (5th graders get the vp, treasurer spots while pres and secretary are 6th graders).

I like that they can fail, get back up and try again.

Sent from my iPad 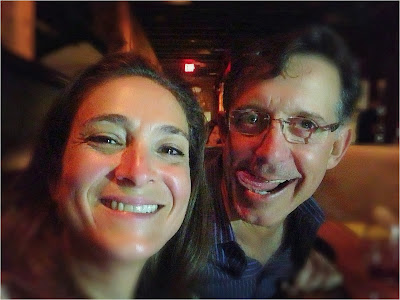 Had a nice dinner with the Modeans and wives last night at Virtue Feed and Grain. Had a great time but I think I'm done with that restaurant. The meal was actually pretty good, in fact, better than last time but the staff is getting worse. Had to jump up and down to get one of the bar tenders to stop chatting with each other and take an order while our waitress had a hard time focusing. It's not the first time.

The annual birthday outing in Alexandria is always lots of fun and we should do it more often. I guess this is the official end of my birthday week.
Posted by Mark at 8:04 PM No comments: 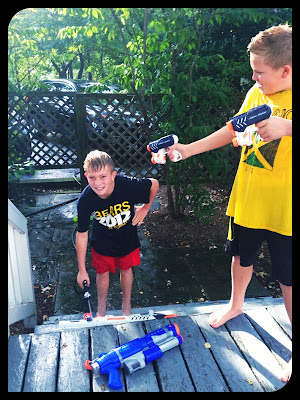 We began the process of cleaning and de-cluttering for fall and winter as we do most years. Spent about 2 hours on the shed today and tossed a lot of stuff. The boys were sorta helpful but played with just about everything that came out, including an arsenal of water guns. They also rode their bikes for a while which had been untouched for 9 months. All in all, they spent most of the day outside which is better than staring at their iPads.
Posted by Mark at 5:10 PM No comments: 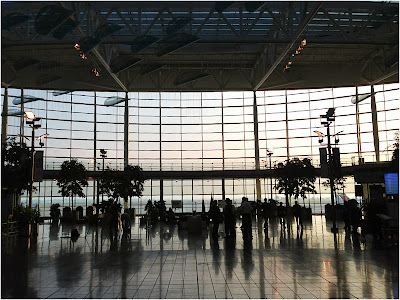 Police and firefighters gathering to mark the anniversary of 9/11. The airport is very quiet this morning.
Posted by Mark at 8:45 AM No comments: 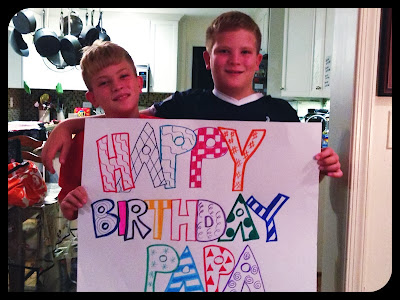 It was a hard birthday being away from the family but I managed to have some fun with my colleagues here in Indianapolis. Looking forward to heading home. Thanks for all the well wishes.
Posted by Mark at 11:40 PM No comments: 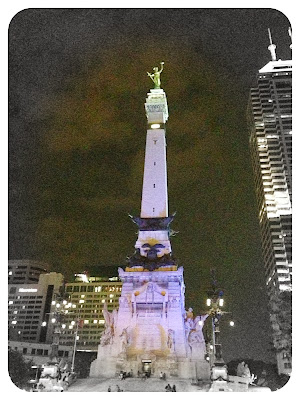 We had Alan Alda at the board dinner last night and he's speaking in the open board meeting today at noon. Nice guy and I'm looking forward to his presentation. The Colts are playing in town today so will need to leave early to battle the football crowd on my way to the convention center. Two days down, a couple to go.
Posted by Mark at 9:49 AM No comments: 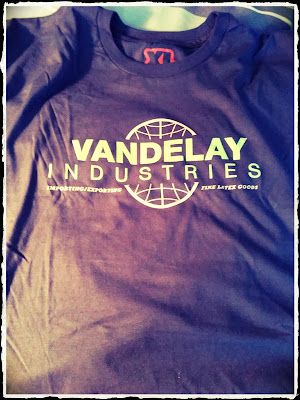 Rachel's birthday gift is only relevant to Seinfeld fans. Good shirt.
Posted by Mark at 10:21 PM No comments:

The Fun I missed 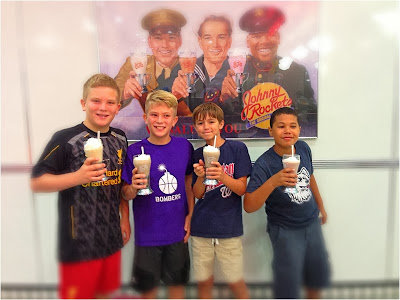 I flew to Indianapolis yesterday for another ACS meeting and missed the big sleep over with Aiden and Mick. Nicole took them out to Johnny Rockets for dinner then the sugar charged children stayed up until 2:30am messing around. Those are going to be grumpy kids later today.
Posted by Mark at 3:08 PM No comments: 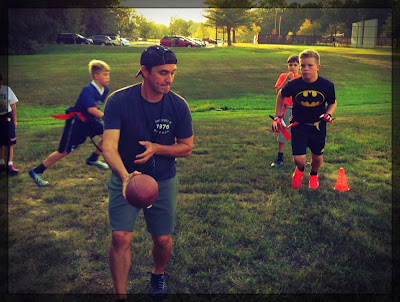 The boys are doing the same plays over and over again until its drilled into their heads. They are listening much better this year and I think taking practice more seriously. It felt like Fall out there as well and the NFL starts tonight. It's football madness.
Posted by Mark at 7:49 PM No comments: 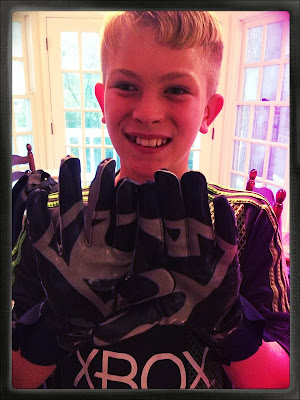 After a long list of issues with these gloves, including FedEx losing them in Memphis (not the package, just the gloves in the package) Dylan finally has his Under Armor Superman football gloves. His expression was priceless when he put them on and we went outside to throw the ball around. I hop he has as good of season as he did last year with these new football catching devices.
Posted by Mark at 8:00 PM No comments: 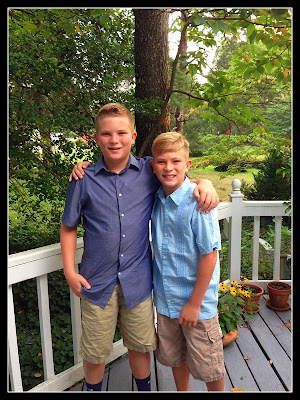 The boys reported a good first day of school with only one new kid in the 5th grade this year. Kind of surprising since we live in a highly mobile area with military families coming and going on a very regular basis. We lost 4 or 5 kids so the class size is down to 19 and 20 which isn't bad. The last couple years its been more like 22 or 23.

The boys did look spiffy on day one.
Posted by Mark at 8:12 PM No comments:

We had a nice and relaxing Labor Day weekend, getting in three trips to the pool. While I'm not sure my tan is going to last a long time, it did feel good to get some good rays. Tomorrow the boys go back to school which officially closes summer for 2013. Enter my favorite season, with football starting, the days getting shorter, leaves beginning to turn and the temps going down, fall is finally here.

Sent from my iPad
Posted by Mark at 8:04 PM No comments: 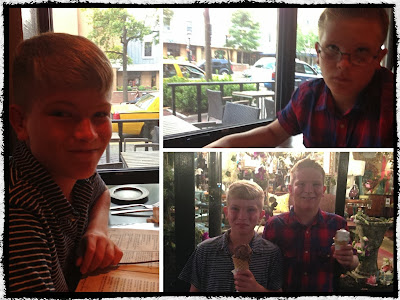 We went into Old Town for dinner and ice cream tonight. It was a good top off after a day at the pool and some lying around. Old town is fun in the summer with a lot of tourist traffic creating some energy on the streets. The kids like big boy restaurants these days and behave a lot better than they did a few years ago. They also like ice cream.
Posted by Mark at 8:58 PM No comments: