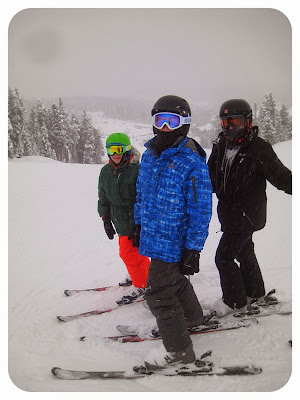 We all skied together today and made our way over to Peak 9 for some new, long and well groomed green trails. Their was much whining from the crew because it's a long ways from the top of Peak 8 over to 9 and it included some new blue runs and a little poling on a kinda flat area. They loved it when we got there. A good day here in Breckinridge and the boys are turning into good little skiers.
Posted by Mark at 7:45 PM No comments: 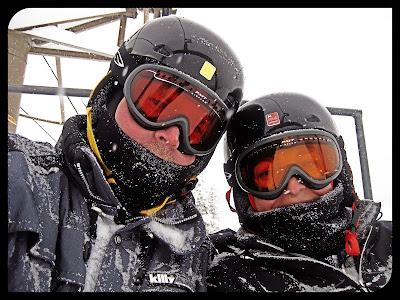 Like a selfie but with lots of snow.
Posted by Mark at 8:16 PM No comments: 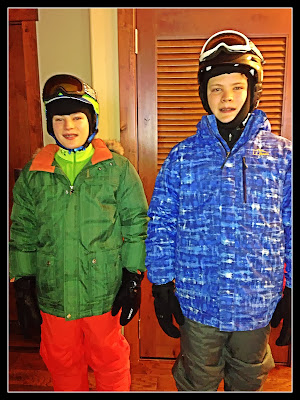 It's not real cold but man is it snowing. 15 inches last night and today, maybe more and it's not supposed to stop until Friday sometime.
Posted by Mark at 12:45 PM No comments: 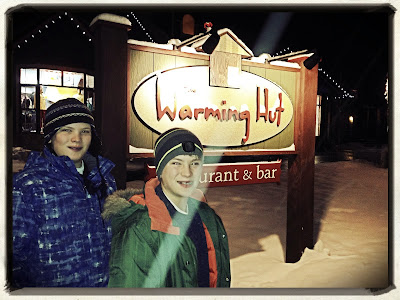 This is where we started our ski vacation last year. Tons of snow on the ground this year and 20 to 30 inches on the way. It's powder time.
Posted by Mark at 8:55 PM No comments: 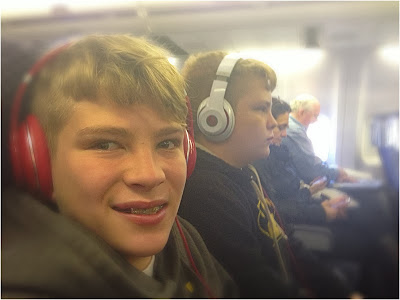 An early flight and hoping to best the winter storm heading for the mountains.
Posted by Mark at 8:30 AM No comments: 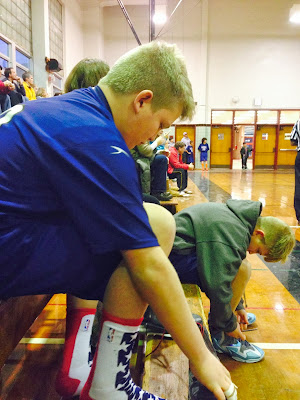 I made it back from Dallas in time for the second basketball game of the weekend against Lee District. The little Patriots lost to Mt. Vernon by 2 points yesterday and went into this game with a lot of energy. They were up by 12 in the middle of the second but turned cold and lost by 5. Sam was pretty broken up by it all but he played the whole game and was pretty exhausted by the end. He had 14 points, 20 rebounds and 3 blocks. Dylan didn't get a lot of playing time but pulled down 3 rebounds while hustling like he always does.

We are off to Breckinridge this week and they will miss Saturdays game which they are bummed about but some time on the slopes and I think they will be re-energized and ready to play out February and head to the playoffs. I'm looking forward to the trams well. Nothing better than traveling to beautiful places with those little monkeys and Nicole.
Posted by Mark at 8:45 PM No comments: 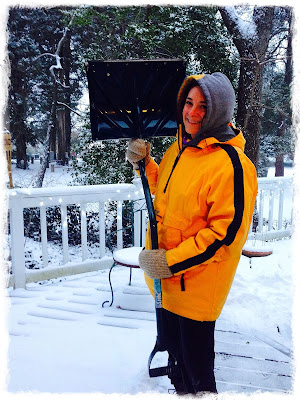 Nicole got her wish and has already shoveled once. She will likely need to go out again in a few hours but I think she's looking forward to it. We have about 4 inches and another couple plus single digit temps on the way so it is a high probability that school will be closed again tomorrow, just like today. It's a good little storm and the world is all white.
Posted by Mark at 7:23 PM No comments:

We have not had more then three inches of snow in one storm since 2011 and I think that one was like 4 inches.  Anyway, the city is already shut down without even a flake flying but I got into work in record time.  Had a meeting this morning but I'm going to head outta here in when things start turning wintery.  Maybe some sledding tomorrow if we are lucky. 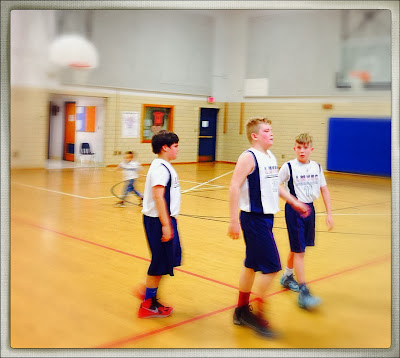 Vienna was hitting everything today and the little Patriots were having a hard time getting the shots to fall. The whole team was a little off and Sam went into the half with zero points. The patriots did come out hard in the second half and cut the lead to 6 at one point but ended up fading and getting their first division one lose 33-49.

Dylan had a pretty good game with 4 rebounds and 2 points. He ran hard and really went after the ball. Sam was off a bit but still managed 18 rebounds and 10 points, he just wasn't the normal Sam out there. The teams Micheal Jordan also had an off game, he had 10 points too but that's about 10 less than his average. Their will be better days.
Posted by Mark at 4:50 PM No comments: 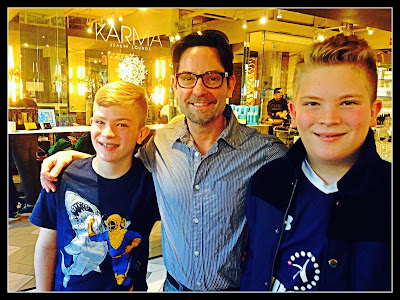 Patrick has been cutting the boys hair since their first cut way back when. They are now requesting certain looks based on their favorite soccer players and Patrick is happy to oblige.
Posted by Mark at 5:31 PM No comments: 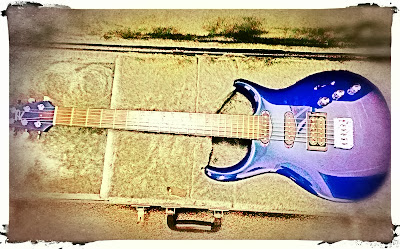 Bought this from my friend Mike and got to use it with an amp at my lesson yesterday. My own amp should arrive tomorrow. Electric guitars are easier to play than acoustic and will hopefully get me over the learning hump. Jodi, my instructor, likes it.
Posted by Mark at 8:08 PM No comments: 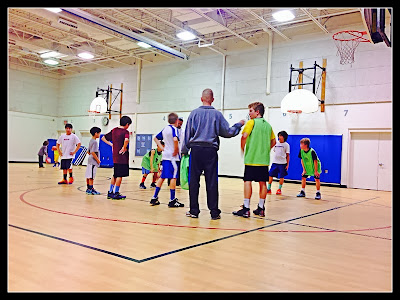 Based on the weather forecast, we should be able to get two practices in this week. The boys always need to run and due to weather or the holiday they were lucky to get one practice in a week for the last month. The team is definitely getting better and seem to have fun together. Good group of adults as well. One more practice on Friday then a Sunday game this weekend.
Posted by Mark at 9:14 PM No comments: 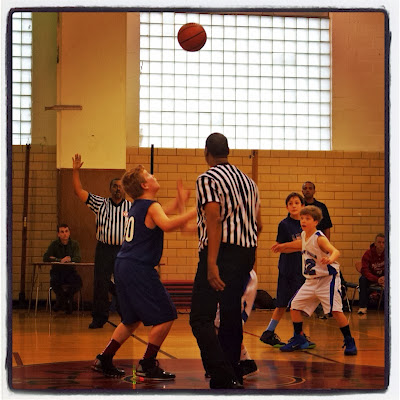 The Patriots went into overtime to beat Great Falls 49-42 in a really good game. The boys fell behind 27-18 late in the 1st half with Sam on the bench with 2 early fouls. Dylan took over at center and rebounded like a monster and the team cut the lead to 4 before half. The lead seesawed back and forth in the second half with neither team leading by more than 2 but we were all tied up at the end of regulation.

The patriots turned it up at that point with Sam providing a couple nice blocks, rebounds and 4 points to seal the game. Both boys played well and added their unique skills to a team victory. Dylan with his high intensity play and Sam with his size and athleticism. Dylan had 6 rebounds and played almost half the game and Sam had 12 points, 20 rebounds and 3 blocked shots. We still have some tough games ahead but 3-0 in the division 1 schedule is a good start.
Posted by Mark at 8:23 PM No comments:

They didn't call it a polar vortex when I had to deliver 50 newspapers at 6am in 1976. An air temperature of -25 was just another January day. School has been cancelled tomorrow and the low is only going to be 7 with a -10 wind chill. Come on man.

Sent from my iPad
Posted by Mark at 9:12 PM No comments: 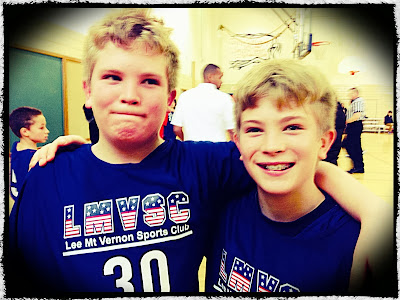 The boys exacted revenge against Herndon for the loss in the play in round back in November. The Patriots played well in a 48-36 victory to a scrapping little team. Herndon doesn't have a lot of size but the press really well which is what killed us the last time we played them. We handled the press better this time and we out rebounded them by a bunch. Herndon has good coaches and nice parents, no issues like the McLean team last week.

Sam had 9 points and 14 rebounds while Dylan had 2 points and 6 rebounds. They both played well with Dylan really running the court hard and taking some solid outside shots. Sam was squeezing the ball well with the rebounds and executing long passes to the breaking guards in transition.

The Patriots are now 2-0 in Division 1 play will get back to two a week practices this week. We play Great Falls next Saturday at 12:45. Go Pats!!
Posted by Mark at 5:25 PM No comments: 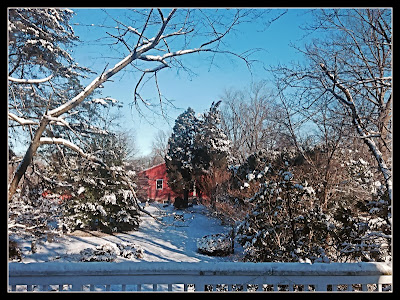 Woke up to 40mph winds and a nice white coat of snow. It's chilly for these parts as well. We don't get down to the low teens that often. Still not as cold as the -12 in a Wayzata over the holidays but cold all the same.
Posted by Mark at 11:29 AM No comments: 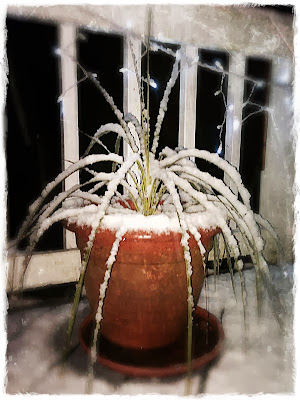 It's coming down but we will only get a dusting when it's all done.
Posted by Mark at 8:36 PM No comments:

It's a weird week because New Years Day was on a Wednesday.  It's been work a day and a half, day off, work a couple more days then the weekend.  Next year will be better with New Years Day falling on a Thursday.  The boys have been off school this week and are at Shadowland with friends at the moment.  Not sure what we are doing with them tomorrow but they probably need some basketball shooting time to get them ready for their game on Saturday afternoon.

We are getting our first snow of the new year but it won't be much.  The bulk of the storm is heading north to New England.  The snow is Minnesota over our Christmas visit was nice but I'd like a little storm or two around here as well  Maybe next week.