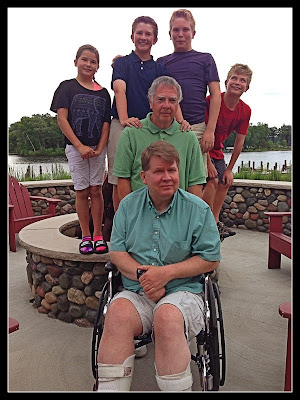 The grand kids are getting big and grandpa smaller. It's always fun to celebrate gramps in the great north woods each year. Happy birthday Dad.
Posted by Mark at 11:04 PM No comments: 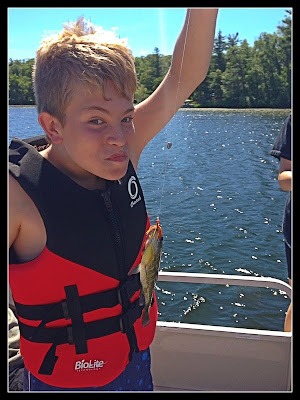 This little guy went back in the lake as did all the catches today.
Posted by Mark at 3:02 PM No comments: 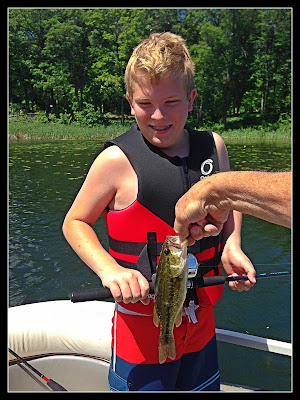 Sam will catch them but he won't touch them, or the bait.
Posted by Mark at 3:00 PM No comments: 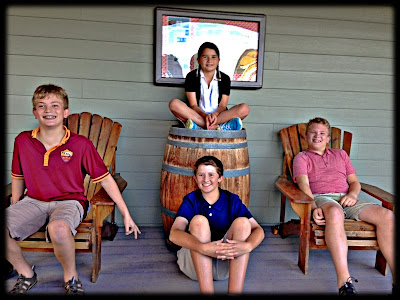 We made it up to Lake Sylvan without any issues but the 30 mph winds knocked out power shortly after we unpacked. It came back on a couple hours later and we had a nice dinner at Iven's on the Bay then the usual ice cream stop at Maddens. Gotta get some sleep before a long dat of fishing tomorrow. Oh joy.
Posted by Mark at 10:49 PM No comments: 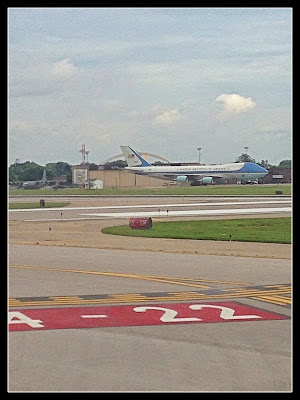 Wish I could've caught a ride on this to Minnesota. The flight we were on was fine but this plane would have been better.
Posted by Mark at 9:32 PM No comments: 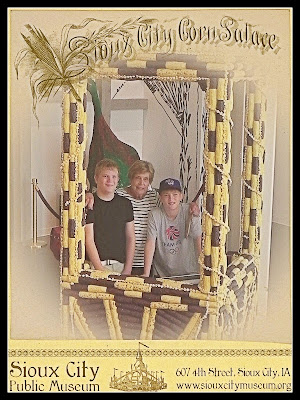 You can't go to Iowa without visiting a Corn Palace. Looks like mom and the boys are having fun.
Posted by Mark at 1:34 PM No comments:

Uncle Tim and the Boys 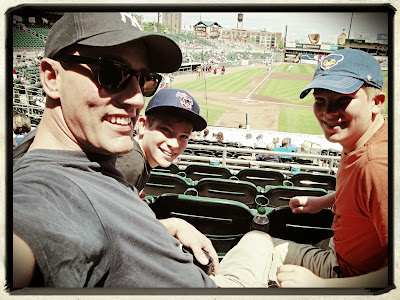 Timmy took the boys to the Iowa Cubs game today. Sam caught a foul ball. They had a good time.
Posted by Mark at 11:12 PM No comments: 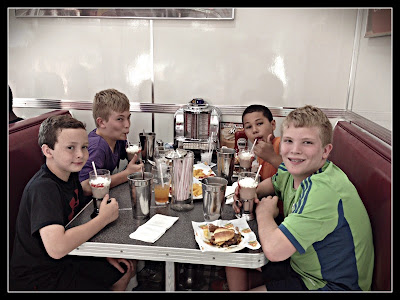 These boys went to Johnny Rockets then proceeded to play whiffle ball, soccer, xbox, wii, have Nerf wars and watch movies until around 2am. They got a few hours of sleep, had breakfast and played some more. Dylan and Sam are worn out. Aiden is moving to Massachusetts in a couple weeks so this will be the last time they see him in a while. They will miss him a bunch.
Posted by Mark at 2:51 PM No comments: 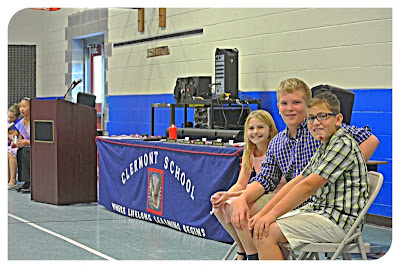 The 2014-15 VP, Secretary and Treasurer. The incoming President is on the other side of the podium since she was VP this year. It should have been Dylan. He's destined for bigger things. I'm proud of both of them but this was a good win for Sammy and he handled the swearing in ceremony well. Both boys were recognized in today's ceremony for their service as SCA reps this year as well. I'm sure Dylan will go for class rep next year to keep his brother honest.
Posted by Mark at 7:28 PM No comments: 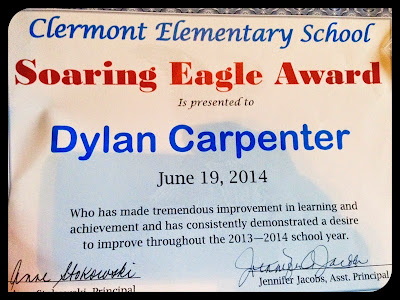 This is given to one person in each class. I'm very proud of pickle for scoring this honor. Sam got a medal for his strings duet performance and will be sworn in as 2014-15 secretary tomorrow.
Posted by Mark at 6:50 PM No comments: 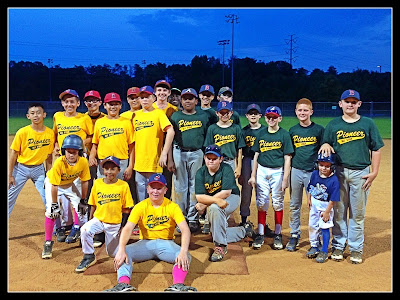 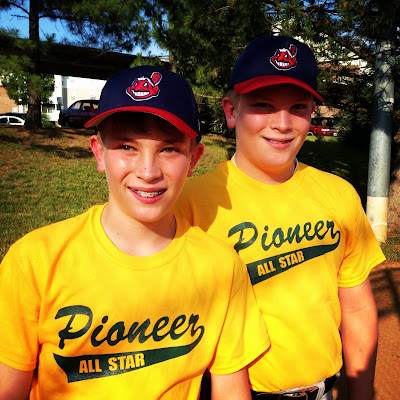 Dylan got the call to join the All Star team after one of the other kids broke his thumb. While we hope Jonah's thumb heals quickly, Dylan was thrilled to join the team. Both boys played well and had a ball with the kids on Pioneer Gold. Pioneer Green won but Gold had more fun.
Posted by Mark at 10:55 PM No comments: 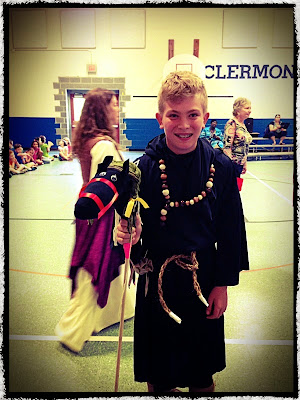 Dylan and is mighty steed during Renaissance day at school. We finally had a day off sports and school activities yesterday. We just hung out and watched World Cup soccer. Dylan did come down with something but is feeling better today. One more week of school then summer begins.
Posted by Mark at 5:36 PM No comments:

So the elections are over and our little Sammy is Secretary of student council next year. Unfortunately Dylan came up short on his bid to take the Presidents office. I'm very proud of both of them for putting their necks out and running for office for a second year in a row. Sam lost the VP race and Dylan lost the Treasurer race last year but they both served on student council as regular members.

While Sam ran a good campaign with a lot of humor and his outgoing personality, he had a weaker crop of contestants. Dylan was up against a tough line-up, including last years VP who ended up winning the office. He was pretty devastated but pulled out of it quickly after I offered up this weekend as Dylan Day weekend instead of Fathers Day weekend. He's in charge of what we watch, eat and do all weekend long.

Sam has been a roll the last week or so but I think Dylan will be scoring his own little victory very soon. He always gets up and goes back at it like the champion he is.

Sent from my iPad
Posted by Mark at 7:31 PM No comments: 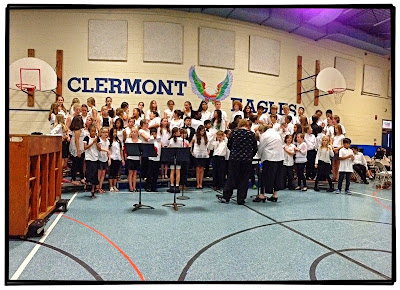 Sam played his viola in strings and Dylan played his sax in the band before both joining the choir for some rousing numbers. The whole concert sounded better than last year. Another parent called the boys renaissance men.
Posted by Mark at 9:35 PM No comments:

That is the number of days the kids have had either a baseball, basketball or soccer practice or game in a row.  Some of those days they had two events.  I brought them home from basketball last night and they were sitting on their beds exhausted.  I think they were finally worn out and in need of a break.  Sam is getting better from a slight stomach bug he's had the last few days and Dylan is still taking Advil and icing his shin splints on a nightly basis.  16 days of sports is a lot of activity, even for them but things are settling down from here on out which should give them time to recover.  They do have a chorus, band and strings concert tonight but that shouldn't be too taxing.
Posted by Mark at 8:46 AM No comments: 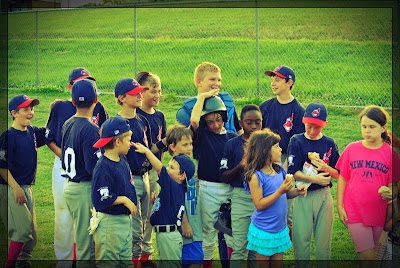 Great season for the little Indians and a great group of kids and parents. We weren't the best team out there this year but we had the best cheering section and enthusiastic boys by far. Win or lose we always had a good time in the stands and on the field.
Posted by Mark at 9:39 PM No comments: 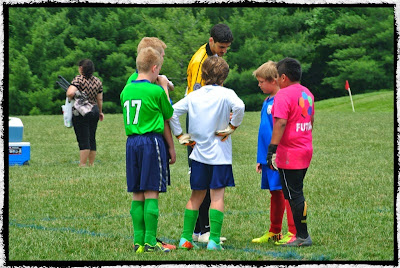 Dylan and Sam were captains in today's match. The boys played hard but came up short to a cheap team. This team pushed kids down, threw elbows and slide tackled from behind. Our kids played the ball like they did all season. I'm proud that the boys didn't lower themselves to this teams level while at the same time, maybe we should have fought back a little more. I really hope that team gets spanked in the final tonight. I could go watch but then again, I've got better things to do.
Posted by Mark at 5:08 PM No comments: 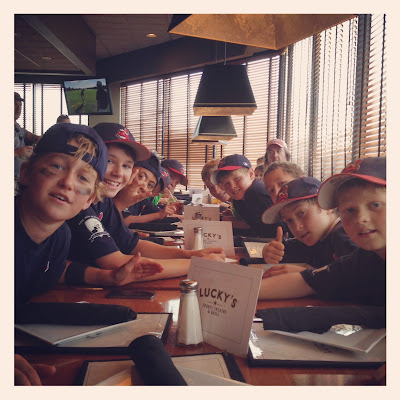 Playoffs for baseball and soccer kicked off today with a bang. We started out with a game against the Mets and a real pitchers duel. Our flingers were on fire and struck out 20. Their pitchers were good too and the game went two extra innings when Sam hit a hard single just barely over the glove of the Mets third baseman. He managed to steal 2nd and 3rd before stealing home on a passed ball. Both boys went 1 for 3 with line drive singles as well as playing really well in the field.

After a quick stop at Lucky's for a team lunch we had to get over to the soccer playoff game. Again, another really good game Dylan running hard and Sam having one of his best days in goal ever. We ended up tied 2-2 after regulation and had to go to a shoot out. Each team picks five players to take penalty kicks and Dylan and Sam were chosen. Sam also had to defend the goal against the other teams kickers and saved 4 of 5. Our best player Judd scored one and Sam scored on his kick giving the "Mean Green" a victory. Dylan's penalty kick was powerful but just a tad to high.

We have the next soccer game tomorrow at 1:30 and if we win, the championship game at 6. Our next baseball game is Monday. Good sports day for the boys and their parents.
Posted by Mark at 6:05 PM No comments: 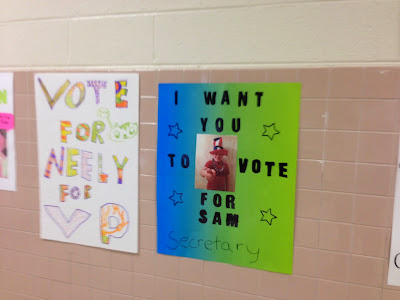 I like this one and the one next to is typical of many of the other posters. It all comes down yo the speeches set for tomorrow.
Posted by Mark at 1:26 PM No comments: 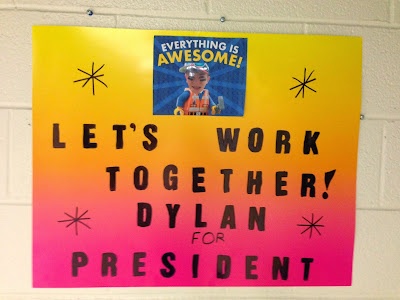 With a current theme and a unity message, I do not see how he can't win.
Posted by Mark at 1:23 PM No comments:

It happened again, Sam was chosen for the baseball all star team and Dylan came up just a little short. I'm not sure who was hurt more by this but I'm really over the all star team thing at Pioneer baseball. Basically, 4 kids on each team feel great and 7 feel bad.  Sam felt both.  We drove in two cars to the game last night and Sam rode with me on the way home after hearing about the all star selection.  He cried the whole way because he was so disappointed that Dylan wasn't picked and worried how that made him feel.  He's excited but would give it up for his brother.

Dylan is being a trooper but he really loves baseball and was a solid player out there this year.  He hit well, fielded really well and in limited innings, pitched well.  He threw a one run, three strike out inning in last nights game.  He was awarded the game ball but he was obviously disappointed he didn't get the all star nod.  I know the boys read my blog now and I want them to know that I'm proud of both of them and love them very much.  Dylan's a tough kid and will bounce back from this and be an all star in many things in the future. 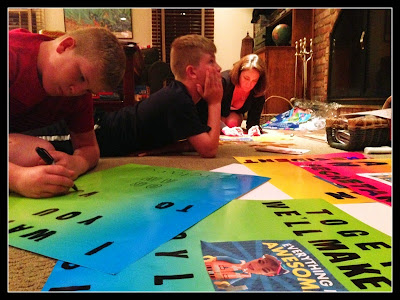 The posters are being prepared for a Presidential run for Dylan and a secretary bid for Sam. Dylan is running on a "everything is awesome" theme from the Lego movie which should guarantee him the 2nd and 3rd grade vote and Sam is going with an "I'm Macho" theme which based on the current state of national politics, just might work. They were on student council this year after running an unsuccessful VP and Treasurer ticket last year.

I like that they want to join things.
Posted by Mark at 9:19 PM No comments: 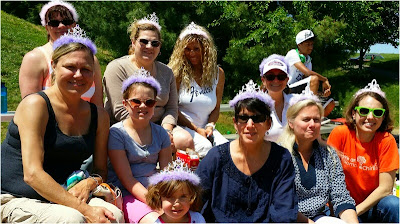 Nicole started bringing tiaras to the baseball games a few games ago and they seem to be bringing the team luck. No losses since tag tiaras were introduced.
Posted by Mark at 4:03 PM No comments: