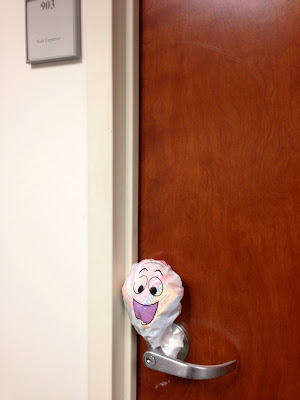 Someone in the office provided a Halloween surprise this morning on everyone's door or desk.  Nice way to start off a very short Halloween week.

I woke up with a really bright light over my head and thought twice before moving towards it. It turns out, it was just the light in the ceiling fan in the basement bedroom. Yes, the power is back and we are watching tv to catch up on what other havoc The Frankenstom is causing.

Sent from my iPad
Posted by Mark at 5:48 AM No comments: 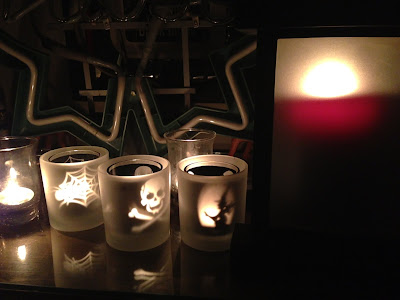 The winds are howling but we are hangin on in the basement.
Posted by Mark at 10:13 PM No comments:

In the basement watching a movie on a laptop with the generator cranking out power for the sump pumps and various electronics. I won't be able to sleep till the rain stops.

Sent from my iPhone
Posted by Mark at 7:47 PM No comments:

We are ready to sleep in the basement for the second time in 14 months and fully expect to lose power at some point in the next 24 hours.  The electronics are charged and the generator is in the screened porch ready for action.  I don't like these storms, I'd take two feet of snow any day.  Everyone is home because the schools, offices and metro are closed and I don't expect to see them open again until Wednesday.
Posted by Mark at 3:27 PM No comments: 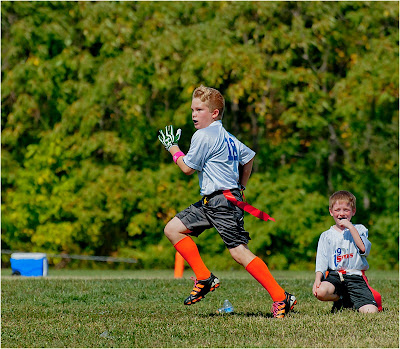 A good shot of Sam heading for another touchdown in the game Saturday. One more weekend of football then a couple weeks off before basketball starts.
Posted by Mark at 6:14 PM No comments: 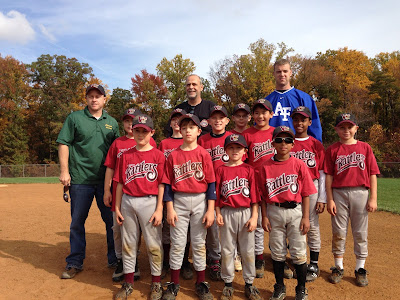 The Timber Rattlers and the baby Browns finished undefeated seasons today. Both teams went 7-0 making it a highly productive fall season. No playoffs for the Rattlers but the Browns are playing for the league championship next Saturday.
Posted by Mark at 5:22 PM No comments: 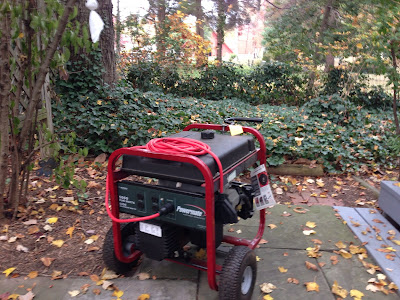 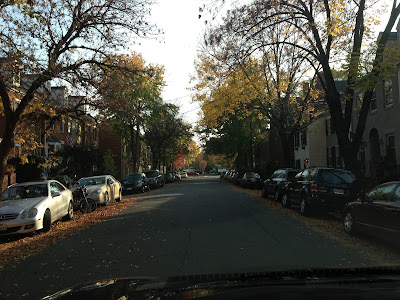 I love the fall color so much that I end up getting distracted on the drives home from work this time of year.  This is a street in Old Town I drive down often and while the picture isn't spectacular, it just just feel good to post it.  I was pretty much stopped at the time I took this and no one was behind me.  I need to make sure I take this all in because a tropical storm is heading this way and most of the color will be blown out of the trees by Monday.
Posted by Mark at 8:16 AM No comments: Hollywood Studios was fun with Meoni but I have an early flight home tomorrow. It will be good to see the family.

Thank You Very Much Thank You Very Much
Originally uploaded by homerclees. 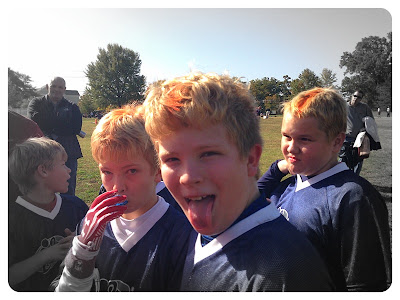 In two games Sam and Dylan scored 10 touchdowns. That includes a 25 yard pass from Sam to Dylan in the first game of the day. I love when they hook up to score on passing plays. Besides the passing TD, Dylan had a momentum charging pick for a touchdown in the first game and completely destroyed the will of the Packers in the second game with 3 interceptions for touchdowns. He seemed to know where the QB was throwing it before the QB did. Sam slammed the door on the Packers with two long touchdown runs. These kids are gamers. I hope we can do well in the playoffs in two weeks. They deserve a championship.
Posted by Mark at 12:52 AM No comments:

'twas the Night Before 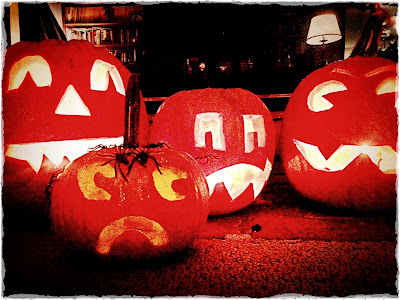 Four of the seven pumpkins are done.
Posted by Mark at 10:08 PM No comments: Originally uploaded by homerclees.
Our friend Carrie sent me a bunch of great action shots of the boys in their last football game. They are really good pics. 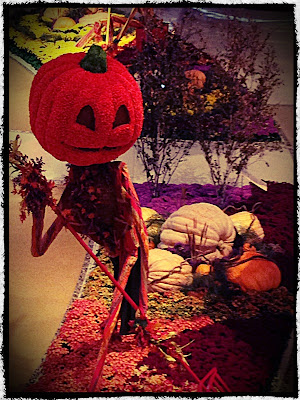 Our annual Halloween party is just a few days away and Nicole is busy cooking up a storm. We have done most of the decorating but have a long list of stuff to do before Saturday. It's a lot of work but its our only big party of the year and let's face it, Halloween is fun.
Posted by Mark at 9:56 PM No comments: 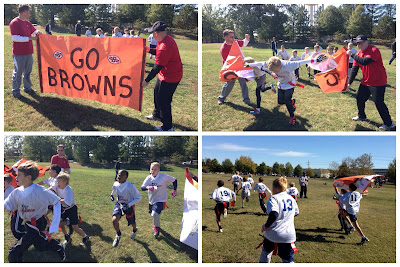 The boys did well again today in football. They both had interceptions for touchdowns and Sam had two great runs for TD's and Dylan ran a two point conversion. The little Browns won the game 34-12 and improved their record to 3-0 for the season. Tough game next week against the Steelers. Dylan's baseball team won as well and pickle walked and struck out. He is going to get back on the hitting train any game now. He keeps working at it.
Posted by Mark at 7:03 PM No comments: 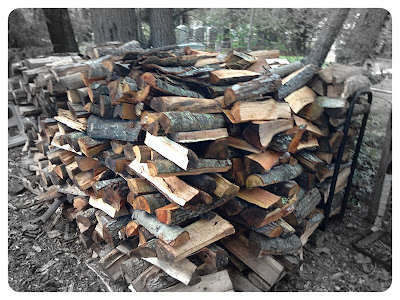 He was late but delivered a cord when I was out of town this week. It's going to get down to freezing tonight so I've already started making the smaller. It's good to be home.
Posted by Mark at 7:45 PM No comments: 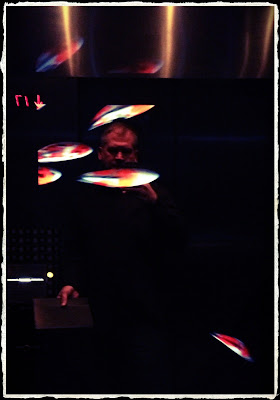 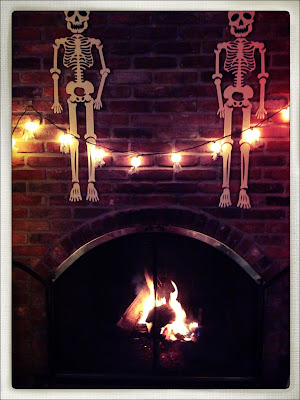 The firewood guy did not show up today so we had to make due with some wood from Safeway. I will be finding a new firewood guy tomorrow.
Posted by Mark at 7:54 PM No comments: 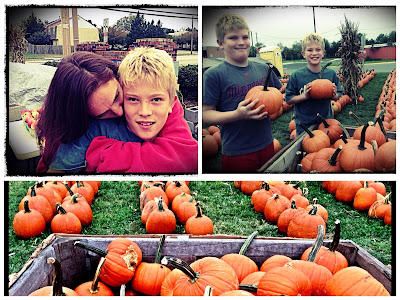 I picked up my costume today and stopped to get a few pumpkins. It's cold and we have a fire going. Fall has arrived.
Posted by Mark at 6:14 PM No comments: 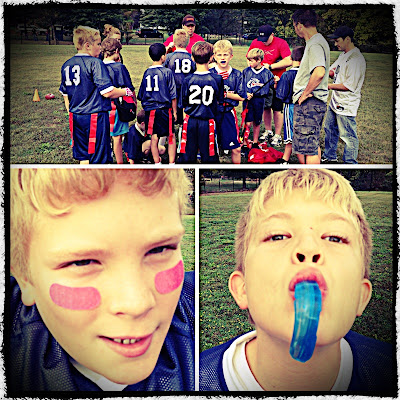 The boys football team won again today. 19-8 was the final with Dylan scoring two touchdowns and Sam completing a pass for an extra point. I get pretty excited about their sports accomplishments but keep it under control. Two things I'm noticing this fall is that Dylan is running with conviction and vision and Sam is turning into a leader. Dylan is always the first one to doubt himself but the last two games he has had an incredible sense of self confidence that has shown up in long runs and amazing cut backs out of traffic. He is seeing three steps in front of himself.

Sam is the field Marshall on that field and every kid is looking to him for leadership on offense and defense. He's big and athletic but is also looking out for the rest of the team and the team wants him around the ball if the chips are down. He and Dylan are both right there when a team mate makes a good play and leading the cheer when the team succeeds.

The Browns are 2-0 and their best runner (Max) will be back in uniform and with the team the rest of the season. It's a tough league this year but I like their chances.
Posted by Mark at 6:09 PM No comments: 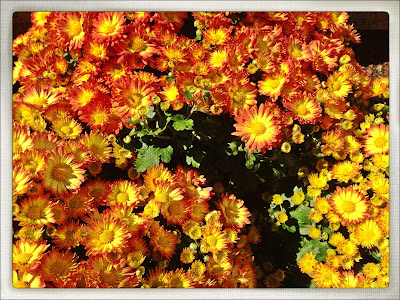 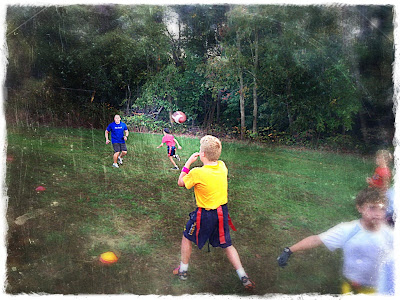 Another practice for the 1-0 Browns on a beautiful fall might. We are looking at the first fire night of the season on Sunday with temps barely making 60 during the day. My wood guy says he's going to get me a cord by Sunday morning so I won't have to pay a crap load for small bundles they sell at Safeway. I really look forward to fire season.
Posted by Mark at 6:25 PM No comments:

I've just finished lesson two and paid for the rest of the month. I'm learning stuff but realized that I need to find at least 30 minutes a day to practice. That's going to be tough but not impossible. Sam is supposed to practice his viola 30 a day too. Maybe we can do it together.

Sent from my iPad
Posted by Mark at 9:46 PM No comments: