This is what happens when the cherry blossums fall off the trees. Lots of pink petals sticking to your shoes. The last few days of 90 degree weather are gone and it's back in the 60's where it should be. They tied the Nats this time. I think all the games will be draws. 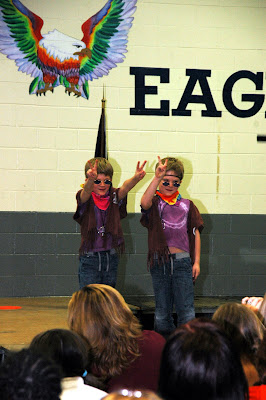 As part of the big 40th Anniversay of Clermont School the boys participated in the decades fashion show. Dylan is the Dick Nixon on the left there with the double peace sign. The show had everything, a band concert, chorus, speaches and a fashion show. I laughed, I cried, but I'm glad I'm home. 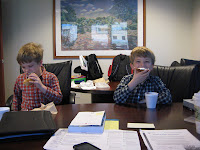 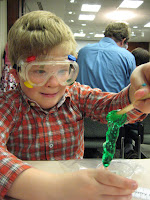 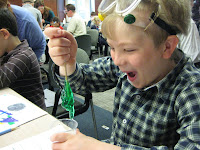 Dylan and Sam came with me to work today and participated in a bunch of fun Chemistry activities. Not the typical day at work for me and actually more exhausting than the usual fair of meetings, e-mail and strategy documents. Tomorrow's day at work will be a break compared to today. Here they are eating breakfast at my desk this morning and creating some sort of green gel out of a couple chemicals. They had a good time.

They also had their first t-ball game tonight and were spanking that ball pretty well. They still have no clue where to throw it when it comes to them but I suppose that will come. Sixty's fashion show tomorrow night at school. The activities never stop.
Posted by Mark at 8:44 PM No comments: 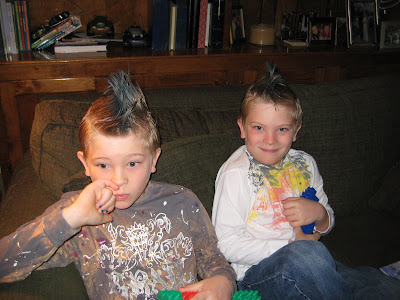 Sid Vicious and Johnny Rotten that is. Yes, it was eighties day at school and and Nicole's punk look reminded me of my favorite Sex Pistols, blue hair and all. The boys are coming with me to work tomorrow (bring your children to work day) and missing 70's day but will be back in the groove on Friday for 60's day. They aren't missing much with the 70's. 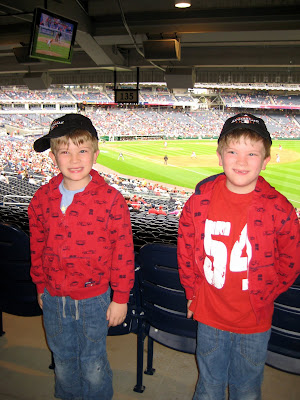 We participated in the t-ball opening ceremonies on Saturday and went to the Nats game today. Bought a bunch of furniture in between but getting a healthy dose of baseball this weekend. It was our first visit to the new, well, one year old Nationals Stadium. Grabbed the metro at Huntington and emerged a half block from the gates, very convenient. We didn't stay for the whole game but the boys loved the playground and video game room there. We have our first t-ball game on Tuesday and a basketball practice on Monday. Gonna be a busy week of sports. 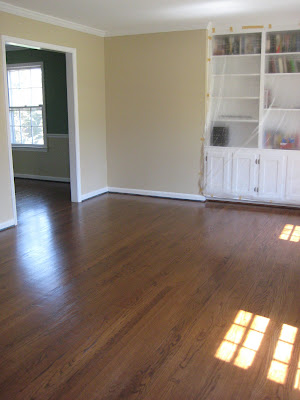 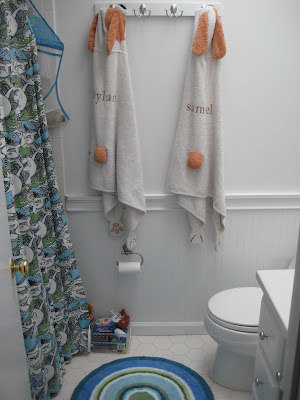 The floors in the front and dining rooms look great and the guest bathroom is looking good with the new beadboard, fixtures, vanity and and shower curtain. We bought a two desks, chairs, a tv stand and leather love seat for the front room this afternoon after the t-ball opening day ceremony. I really love the look and feel of the re-done floors but realize that the scuffs and scratches are just days away and I will have to get over it. The walls all look great too but 4 six year hands are going to be all over them and once again, I'll just have to deal. Fun to have things in order for a while anyway.
Posted by Mark at 6:45 PM 1 comment: The big council event last night was a beer and cheese tasting lead by the brewmeister at the Brooklyn Brewery. It was fun and pretty interesting. During the lesson on beer and cheese he also talked about business and customer experience but it was an engaging way to learn.

Went out to a bar in TriBeCa and then the lower east afterwords with some long time creative good staff. Some of whom are moving on and I won't see at the next event. Gonna miss those guys.

On the plane going home now. Can't wait to see the family and new floors. I've been in the financial district for the last couple days for the first time since about 2002. It's a whole different world from the rest of manhatten and a little confusing. I prefer the village and mid town to be quite honest.

I'm beat from a long 5 mile hike on the Bull Run battlefield and finishing off the taxes. Yes, Manassas was the name of the battle to the southerners but the Yanks named the battles after the nearest river, creek or other natural object. It's speculated that the northern army was mostly from the cities, towns and villages and were impressed by the natural objects near a fight and the confederates were mostly from the country and were impressed by the artificial object near a battle like a city or town.

The boys loved the cannon per usual and didn't complain much during the hike. They may be ready to start hitting some longer trails. My knee may not like that but the boys little legs seem to be up to the task. Anyway, it was a glorious day and I got a lot of pictures. I'm off to New York tomorrow for a day or two and need to go to sleep.

Widget powered by EveryTrail: GPS Geotagging
Posted by Mark at 4:22 PM No comments: First Round
Originally uploaded by homerclees.

Shot an 89 but had two birds and a half dozen pars. Also had a couple snowmen. Great day for one predicted to rain most of the time. Couple beers then home. 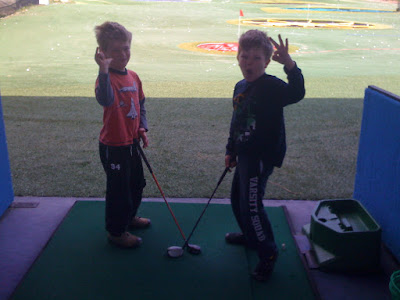 Blanca had another appointment this morning so I took the boys the first half of the day. We hung around the house in the morning while the carpets were being cleaned then headed to the Driving range for a bucket of balls and some lunch. This was the first time we've been to the range and the boys did pretty well. Master's 2021 here we come.
Posted by Mark at 4:13 PM No comments: Fanning Me
Originally uploaded by homerclees.

The most obvious part of all the housework going on right now is the new fan over our bed. I have to look up at it every night and most mornings. Can't help it, it's right there. It creates some serious wind on the lowest speed and looks dashing in that brushed nickel kind of way. I love my new fan and look forward to it cooling me for a long time. 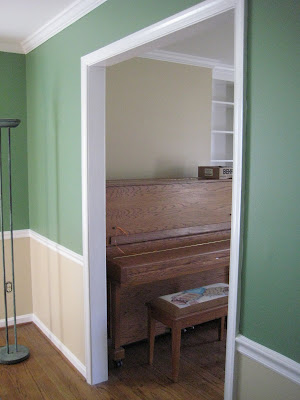 The house is coming along pretty well with most of the painting done and the guest bathroom about half way there. This is the new coloring in the front room and dining room. The front room is all kind tanish and the that kind of mossy green with tan below the chair rail. It all looks great and was much needed. After all all this is complete the only thing we have left is the kitchen. That's going to be pricey and will probably have to wait another year. Otherwise, we've done every room and the outside of the house in the past 7 years. I guess you have to start over when we finish the kitchen.

Work and coordinating all the materials needed for all the work being done on the house made up most of this week. We are getting the guest bathroom redone (goodbye fishy wallpaper) and are have most of the inside of the house painted and the wood floors redone. Nicole picked some great color combinations for the living room and dining room. The whole place is looking better with new ceiling fans and fixtures but they are not done and the place is kind of a mess. New furniture for the living room is next and that will be fun to pick out.

Watched Bolt with the boys tonight and we are watching Young@Heart now. Both good movies. I'm diving into the taxes tomorrow, hoping the amount owed is reasonable.