Buying lighting, ceiling fans and crap like that. The hall bathroom is the next project for Bernardo now that the deck and screened porch are done. 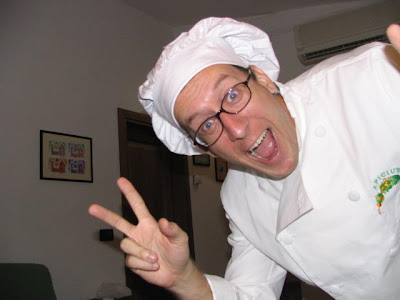 Had a long day at work Friday but Nicole and I had a nice dinner in old town then met some friends we hadn't seen in years. Thom and Jen moved to Maine 3 or 4 years ago and they haven't been back much since. We met them and Donkey at Tiffany Tavern for a little bluegrass and a bunch of beers. It was good to see them and realize even after a few years we could just slip back into a good time with no effort at all.

Been meaning to get to Maine one of these days to do a bunch of sightseeing and now it seems their is even a better reason. It's been raining for days around here and we stayed pretty close to home all day today, running errands and doing some work around the house. The boys and Nicole made it downtown to the Natural History Museum for a little while. No hiking tomorrow due to the broken legs not all healing at this point but maybe some light fixture and ceiling fan shopping. Good times...
Posted by Mark at 9:08 PM No comments:

I've been home with the boys by myself the last couple nights and we've been having a ball. Unfortunately work has been busy too and my ability to put a decent meal on the table has been hampered by a certain lack of energy and knowledge of basic cooking procedures. We ordered pizza two nights in a row but they enjoyed it. It's fun to have them all to myself every once in a while but look forward to Nicole getting home in a little bit. It's fun with her too.

The work thing has been really good lately. I'm keeping extremely busy but it's doing stuff I enjoy and I feel like I'm making a difference. You can't ask for much more than that. One more full day and a couple days off to hang with the boys. I'm hoping to get them out on a short hike to get those broken limbs back into shape for some long fall marches through the woods.
Posted by Mark at 9:22 PM No comments: 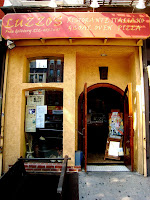 It was a pretty low key weekend with some errands, haircuts, playgrounds and football. I spent most of last week in New York at the O'Reilly Web 2.0 Conference and got some new insights into things that at coming at me at work. It was a good time but I need to spend some time in the office now.

On top of the good stuff at the conference, I was able to find two tasty restaurants and saw one of my favorite bands at the Mercury Lounge. The place pictured here is Luzzo's Pizza and has the best thin crust pizza in a world. It also has one of the last brick ovens in New York due to regulatory issues and it really makes a great pie. Try it out when you are in the East Village around 13th and 1st.

S'Mac has the best macaroni and cheese on the planet. It's actually right around the corner from Luzzo's on 12th between 1st and 2nd. They have a number of set mac and cheese dishes but I would suggest the make your own. I had them throw in blue and cheddar cheese, bacon and tomato's. It was bad ass and worth a trip to New York on it's own.

I also got to see Oppenheimer at the Mercury Lounge once again. I first saw them last summer in the lower East side with Phil, Terry and Maryann from AIA and then again at Mercury Lounge last Thanksgiving with Nicole. It turns out they played DC on the 16th but I was out of town. Great band and they have a new album out on itunes but I suggest you buy the first one first, it's a little easier to listen to.
Posted by Mark at 7:38 PM No comments: On the Tarmac at LaGuardia waiting for our take off slot to get me home. It was a good few days in NYC but I'm ready for a low key weekend. Trump needs a new plane, who flys 727's anymore? Listening to todays keynote from Mr. Web 2.0 himself. This from the convention floor and is for Dylan and sams amusement. Nice day in new York. I was home to walk the boys to the bus stop again this morning and just before we left Dylan remembered that he needed 3 things for show and tell. He grabbed a couple toys then asked if he could take me golf trophy.

This is something I won in a corporate, best ball tournament a few years ago but the look in his eyes when I gave it to him said it was the masters trophy. Priceless. 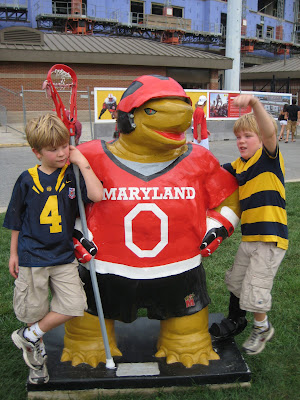 Cal didn't fair too well against Maryland at the hottest football game I've been to in a while. It was miserable most of the game with the dew point near 70 and temp around 90. I think the Bears were at a disadvantage with that heat. You don't get this type of weather out in the bay area. We still had a good time tailgating with Modean and seeing Mike Connelly from Berkeley. Had dinner out with a bunch of folks last night and have been trying to stay indoors today due to the near 100 degree heat index outside. Here are a few shots from yesterday. http://www.flickr.com/photos/homerclees/sets/72157607286127904/ Off to School
Originally uploaded by homerclees.

I'm golfing today and took the boys to the bus stop. Off to finish their second week of kindergarten. Btw, that's Sam with the boot. He broke his other leg.

Lunch with the boys Lunch with the boys
Originally uploaded by homerclees.

In the school cafeteria. The table full of kindergartners guessed that I was 900 million years old. I'm having lunch with Sam and Dylan today and noticed this while waiting for them in the hall. Lauras picture is matted and has a frame. Poor George, no respect in an elementary school either. 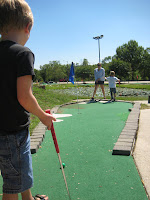 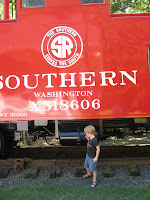 It took a while to get moving this morning but we finally made it outside and did the two things the boys said they wanted to do. Sam was all about mini golf and Dylan wanted something to do with trains. We went down to Cameron Run Park for the golf, where it was also Dog Days at the attached water park. Yes, the park is no longer open for people but for today, it was open for dogs. Kinda fun to watch dogs in the wave pool and tramp sing through the frog pond.

Then we went a few miles down the way to the very small but interesting Fairfax Station Museum. It's a historic station where Clara Barton once worked on wounded Union Soldiers from the second battle of Mananas (or the 2nd Bull Run if you're from the south) Cool spot but small, good place to go this winter when they have a full holiday model railroad display set up.

Back to work and school tomorrow. I'll be taking Friday off to play golf in celebration of my 44th year. Good times.
Posted by Mark at 8:25 PM No comments: All Clear
Originally uploaded by homerclees.

Hanna is all gone now. Four inches of rain and a little windy but not so bad. The creek below us flooded and closed telegraph road but we are high and dry. Sitting on the newly re-painted and re-screened porch as tropical storm Hanna drops buckets of rain on us. The sound and feel of tropical rain is pretty amazing. It comes in pulsing waves and smells like the islands.

Not a lot of wind yet, that will come in a little while but shouldn't be too bad. Don't want to lose power. We need the sump pumps working today and I don't feel like getting the generator out of the shed. I did start it up last weekend to be sure it was in good working condition. Always be prepared. 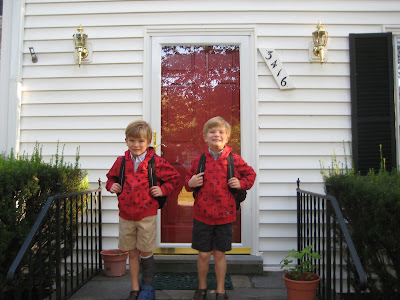 Yes, the kindergartners are done with day one. They got on the bus at 8am and somehow made it back by 3:30pm. Amazing how they move from needing to be taken everywhere to letting them jump on a yellow bus and carted off to a random building. Well, not so random but still, it's another step to them leaving for college. They both seemed to like the first day of school and the whole bus riding thing. They have come a long way from the NICU.

We ended up taking a trip to the College Park Aviation Museum up at the University of Maryland on Sunday and on the way home stopped off at the Kenilworth Aquatic Gardens in NE DC. Both are little known spots in the huge number of national parks and museums in the National Capitol region but they were both pretty cool. The aviation museum had a model railroader club display this weekend so we got a twofer in the boys minds, planes and trains under one roof.

The aquatic garden was a last minute turn off 295 after seeing the sign for the 1,000th time and deciding to find out what it was all about. It was well worth the trip for Nicole and I but the boys were not as impressed after the planes and trains. I loaded the pictures into separate collections in flickr and you can click on the links above to see them.

Today was a bunch of errands and chores around the house. I was going to get the car washed at my favorite local car wash but decided to make it a family car washing extravaganza after seeing the line. The boys liked washing the cars and we got both of them done and looking pretty sparkling I must say. I also got the generator out and started it up in preparation for the train of hurricanes lining up in the Atlantic. Let's hope they stay south.
Posted by Mark at 8:55 PM No comments: