We are at the ortho oncologist again today for sam and he claims he's in the "no hurt" zone on the wong-baker faces pain rating scale. The first time we were here, he said he was in the 7-8 range, the second time, he said he was in the 3-4 zone. That's good progression. Dylan came with us this time but didn't like the xray routine. They are playing nintendo now and we are waiting for the doctor.

I posted a bunch of Auto Show pictures up in flickr and forgot to mention in my last post that we didn't end up seeing Sponge Bob. He was suppose to be in the kiddie play area and was nowhere in sight. Very sad day for all but Spidy and Wolverine help the boys forget about Spongie pretty fast.
Posted by Mark at 8:47 PM No comments: 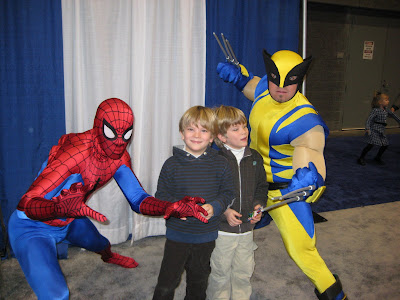 I took a bunch of pictures at the Auto Show today and will put them up on Flickr later today. We got there a little later than we wanted to this morning because Momma was a little "worn out" from our dinner with Charlie's parents, Scott and Suzanna at DC Coast last night. We had a good time and Dora, our new neighborhood baby sitter was great. The boys like her and it appears they have all get along really well. The Auto Show is one freaky place with all sorts of wierd distractions including the Redskinettes, unfortuneatly, I didn't get a picture with them. Dylan really wanted one, good boy... Another cold night and more sponge bob. The boys have been doing well in school and have mostly been behaving for Blanca. We are going to the car show in dc on sunday and they are pretty excited about that. Mostly because of the cars but also because sponge bob will be there. Kumie has to be jealous. 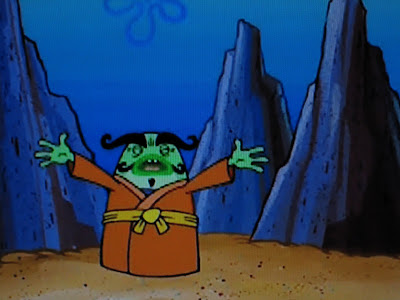 I bought the Sponge Bob King of Karate episode off itunes a few months ago and the boys cannot get enough of it. Today, Sam told me a couple of his toy cars hadn't seen the episode and we needed to show it to them. This is Uton, the guy who lures Sponge Bob to Karate Island in scheme to get him to buy a timeshare. It's actually Condo Island.

Not much else going on around here. Sam's still in his boot and seems to be doing well. No real pain and we can't tell if he's limping at all, because he has the boot on. We go back to the Orthopedic Oncologist next week for another look and hopefully, that's the end of it. It's down right cold around these parts right now but great sleeping weather. This is the time of year to kind of recharge the batteries and get ready for Spring. Lots of fires, long winter naps and Sponge Bob. What's better than that?

Sittin Up in a Tree 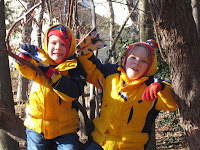 We've been making a lot of paper airplanes the last couple days with a paper airplane book the boys got over the holidays. The boys love flying them around the yard and figured out that they go farther if they climb a tree and throw them. It's been down right cold here this weekend and we haven't done a whole heck of a lot. I wrestled with my broken xbox 360 last night and have to send it back to get fixed. I replaced a dead bolt on the front door because the old one broke. Watching football now and Nicole is making a Guinness Stew of some sort. Just the sort of thing you need on these chilly night. That and the fire I have burning.
Posted by Mark at 4:32 PM 1 comment:

Adam released a couple songs for free on the Counting Crows web site a couple days ago in preparation for the March release of the new album. Hey, the tracks are free so check them out. Then go buy the album in March.

Disclaimer: I am related to and do have an interest in Adam selling more music so this is totally a plug for the new album which I do think is very good and I wanted to do my part in promoting it.
Posted by Mark at 9:03 AM No comments:

Where did that hair go? 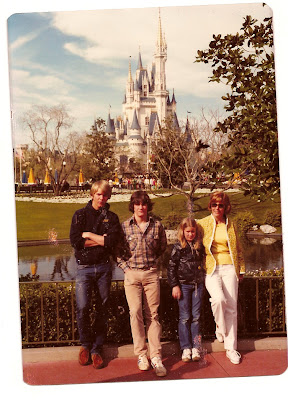 Here's a picture my mom was nice enough to send of my last visit to Disneyworld. I'm around 12 or 13, maybe 14 at this point but I'm oohhh so stylish with my brown cords and tiger sneakers. Jeff and I look way too cool to be having our picture taken at of all places, Disneyworld. I'm pretty sure we enjoyed ourselves when we weren't being photographed. The two of us went car shopping today and are now at Oerwood for lunch and some football. Sam and momma had a birthday party to go to. It was a kid from sams class so we split up for some child-parental bonding. Just heard from nicole, the birthday party was cancelled. Oh well. 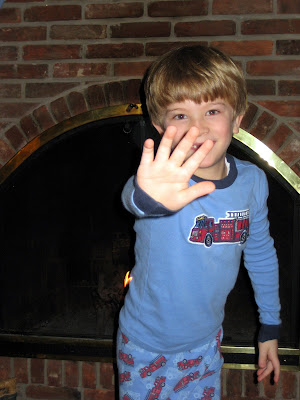 Dylan was showing me some karate moves by the fireplace this evening. He could kick Sponge Bob's behind. Everything is good here after a full week of work. We are taking the boys to a sports bar tomorrow to watch the Packers game. Dylan has become quite the Green Bay fan for some reason. Should be fun.

Give Him the Boot 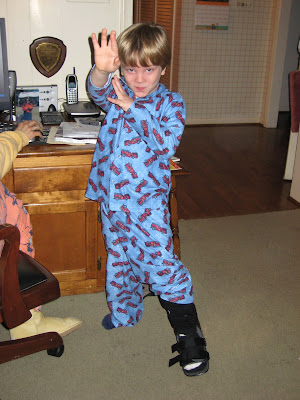 So another visit to the Orthopedic Oncologist today and Sam was fitted for a stabilization boot. At least it's removable and he can basically walk on it. The Doctor decided that they may have taken the cast off too soon and this would help him heal. Sam wasn't thrilled about the concept but he's learning to live with it. He's a trooper.

We're Going to Disney World
Not after I win the Super Bowl but in a couple months for the first time with the boys.  Grandma and Grandpa are going to be in Orlando for a conference so we decided to head down for a little Florida vacation in March.  We are also going to fit in a visit to the Kennedy Space Center, a Washington Nationals game, some beach time around Melbourne and one or two of the other parks in the area.  6 days of jam packed Florida fun.
Now, I'm not a huge Florida fan (except I love Key West) but this trip makes me feel like a kid just planning it.  I've been to Orlando on business many time in the past 15 years but I haven't been to the magic kingdon since I was about 12.  The boys are going to love it and I have a feeling Nicole and I will love watching them love it.
btw, Sam is going back to the Dr. tomorrow to see what's up with his continuing limp.  We hope the cast doesn't have to be put back on but we'll see.  The pain that's making him limp seems to be in the knee joint now which seems a little strange.  I'll have an update tomorrow.
Posted by Mark at 8:11 PM 4 comments: 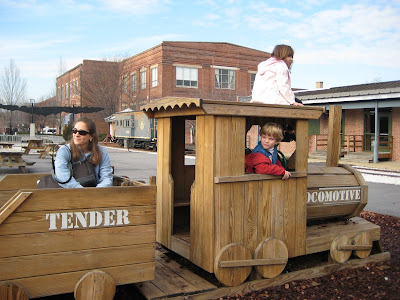 The four of us and Grandma hit the road to Baltimore at 10am to spend the morning at the B&O Railroad Museum. We visited a couple years ago but the boys love the real and model trains all over the grounds. The weather is warming up and we checked out all the indoor and outdoor displays. Sam is still limping quite a bit but we figured the excitement of all those trains would make him forget he had a cast on a couple days ago.

The Christmas tree came down tonight and I think I'm hitting the hay early to prepare for the first full week of work in over a month. I hope I remember what I'm suppose to be doing there. Here's a link to the pictures Nicole and I took today. http://www.flickr.com/photos/homerclees/sets/72157603655708695/

btw, yes, Nicole is now taking some of the pictures since I got a new Canon SD 750 and gave her my old SD 400. I need to break out the D70 pretty soon. Maybe on a hike when Sam can get past his limp. 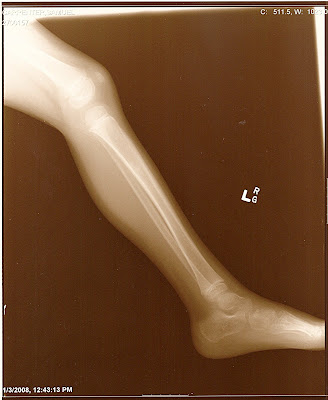 This is the offending limb on Sam and we are still working on the theory that his issue is an occult fracture. We had another long day at the Orthopedic Oncologists office yesterday and based on new x-rays, CAT scan and blood work, he is convinced that the problem is actually a fracture and the mass showing up on the mri and bone scan is from inflammation connected with new bone growth. When we asked him why two radiologists and a pediatric orthopedist thought is was a tumor or infection, he simply answered "they were wrong". I guess he sees this fairly often and Sam's little problem is hard to diagnose. I guess in the long run, the medical system worked and we were funneled to a specialist that sees many things like this and he was able to tell the difference between a problem and a really big problem. Not to say he is absolutely right on the diagnosis but it seems to make sense at this point.

We obviously like the diagnosis and are hoping it's right on but will be watching Sam pretty closely over the new few weeks before we go back to the OO in a few weeks and take some more pictures. Sam is still limping, we think because of the stiffness from two weeks of a cast but he claims the spot on his shin doesn't hurt anymore. He is also acting like a normal little monster that he is so we have every reason to think he's healing up, just like he should be.

Thanks to everyone for all the good thoughts thrown his way, it seems to be paying off and we appreciate all the crossed fingers and positive vibes. Please let us know if we can ever reciprocate.

Now back to the typical meaningless blather you are accustomed to. Sams getting his cast for more pictures today. Don't know if he'll need a new one before we leave. He's being brave about it. 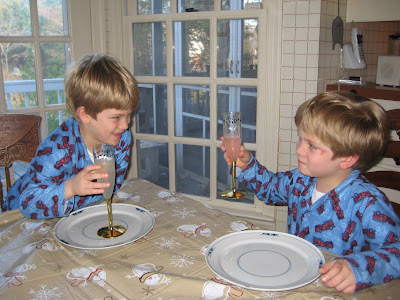 Grandma came in on the red eye last night and we all had brunch with proper toasting. The boys got up early today and Nicole and I wanted to sleep late. We had Mike and Kelly over last night and didn't get to bed until 2ish. It was all good. Lots of wine, champagne and food. The diet starts tomorrow.

Happy New Year
Posted by Mark at 1:29 AM No comments: