ACS is installing a green roof on the Hach building which is right next to and pretty much level with my office in the Othmer building. The work has just begun but in a couple months it will be a lush, green park of sorts. A big improvement over the tar and asphalt surface currently there.

Where Did I Come From

We read the book to them last night and man was that uncomfortable. Sam kept touching the boobs on the naked woman drawing and Dylan kept saying how disgusting it was during the part explaining how the egg and sperm meet. I'm sure we will have to read it to them a few more times in the coming months but then they can just have it to giggle about be themselves.
Posted by Mark at 4:40 PM No comments: My Friend
Originally uploaded by homerclees.

With a long 6 days in Boston in having a tasty greygoose martini before dinner with the fabulous wso staff. It's been miserable outside but I've been able to stay dry with all my meeting being in a skyway/shopping mall connected series of hotels here in the back bay. I'm missing the family pretty good right now and hope the shuttle is flying on time tomorrow. I already looked at the train but even the Acela is a 6 hour trip. Getting some fusion jazz at a Boston club. Good for a cold and rainy night. It's good to get 0ut a little. I got an errant wake call this morning at 5:30am but snapped this picture of the sun coming up before going back to bed until 7am. One day down at the ACS meeting and everything is going well. I'm staying in tonight and doing the room service thing. Need to conserve energy for a few receptions and dinners to come. 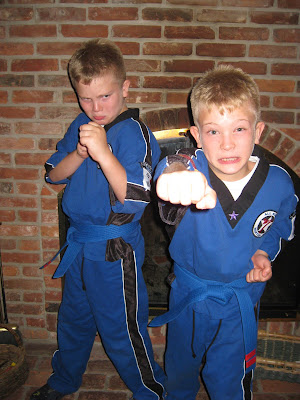 Boys got back to Tae Kwon Do today for the first time in a month or so. Too much traveling this summer. Now they are back learning how to kick my ass. All they really have to do is chop me at the knee and I'm done. Don't tell them.

I uploaded the final group of pictures from the Santa Fe trip on Flickr. It's a bunch of shots stuck together in no particular order. Got some good and bad, including pictures with me in them. Now that doesn't happen that often.

I was able to upload most of the Santa Fe pictures to flickr to today. Only have a few left I will probably get to tomorrow. I put them into sets that make sense.

Today was pretty kind of cool and rainy, which was a big change from the last few months. It felt good. Saw a tree in Old Town yesterday that had most of it's leaves turning yellow and falling. A little odd in August but a sure sign that the seasons are changing. 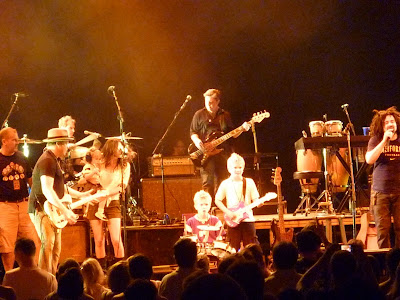 Here's a frontal view of the boys jammin with the Crows. I think I should start them on some music lessons soon. It may actually be something they want to do. I'm home with the boys today and worked most of the morning while they watched a movie. We have now stepped out for some lunch and games. They love pretending they are rock stars. 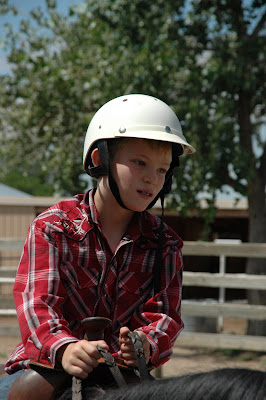 It's been a nice couple days home after a great trip to New Mexico. I think the boys are happy to be back in their own beds after two weeks and actually only being in thier own beds about five nights in month between Minnesota and NM. I started uploading the pictures from the latest trip in segments since it turned out we took 855 photos total. These are the best of the last day of riding camp. http://www.flickr.com/photos/homerclees/sets/72157624557295985/

Adama and Emmy are over for dinner tonight then we are off to Wolftrap for a concert tomorrow. The boys are pretty excited to see their uncle and the energy level is high. They need to chill. We went on the longest tramway in the world today and had lunch at the top of Sandia mountain. The boys loved the ride and the view was spectacular. We also stopped at Tinkertown, but that's a post in itself. We are having dinner in Albuquerque tonight then have an extremely early flight home tomorrow. I took about 400 pictures so I will work on getting those up in the next few days. It's been a great vacation. Lots of stuff I hadn't seen before and it's always fun to spend so much time with Dylan and Sam. Not to mention Nicole, Linda and Gil. Chocolate shakes that is from ice cream shop on the plaza. Dylan returned his to the bushes last night. Let's see if he can keep it down tonight.


Plan your trips with EveryTrail Mobile Travel Guides
Posted by Mark at 3:09 PM No comments:

Music on the Plaza Music on the Plaza
Originally uploaded by homerclees.

Listened to a little country and western on the plaza before dinner tonight, or was it western and country. The Bandelier hike took alot out of us today. It was a beautiful park but the climbing in and out of caves and crawling up the seven story peublo was hard on the knee. The boys sure loved it as I was sure they were going to fall off one of the 30 foot ladders we had to use.

The Los Alamos science museum was nice and the boys learned all the needed to know to build an atomic weapon. They got that going for them. I'll post the every trail hike profile later. Time for bed now.

Plan your trips with EveryTrail iPhone Travel Guides
Posted by Mark at 9:57 AM No comments:

Lord of the Flies Lord of the Flies
Originally uploaded by homerclees.

We went on what was suppose to be an easy hike that nearly killed us with the rocky terrain and elevation. In this picture, the boys are at about the highest point that they had ever hiked (8500 feet). We finished the 2 mile trek and drove up to the ski Santa Fe basin at 10,000 feet. The boys liked the idea of skiing next to time we visit.

The Plaza at Night The Plaza at Night
Originally uploaded by homerclees.

Have had a great few days in Santa Fe with the weather being nice and cool, some thunderstoms rolling by now and again and lots of time with the kids. This place definately has a slower feel than Washington DC and is a much needed break from the work world. Not too much planned today, a museum or two and maybe a trip up the mountain for a short walk. We are heading to Bandalier National Park tomorrow to hike and check out some cave dwellings.

Yesterdays hikes were fun and informative as well. Pecos is a site of an ancient indian pueblo, followed by a couple of big spanish missions. The Glorieta Pass hike was followed a civil war battle people consider the Gettysburg of the west.


Plan your trips with EveryTrail iPhone Travel Guides
Posted by Mark at 10:55 AM No comments: Looking down on the union lines at the Gettysburg of the west. Hiking in pecos national park and keeping a keen eye out for local wildlife.