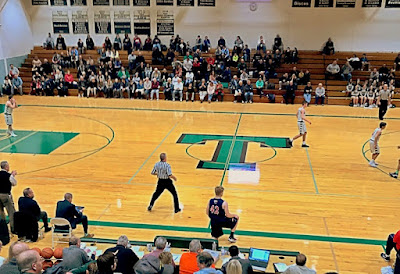 Sam waiting to go in against Trinity High School in Camp Hill Pennsylvania. They lost to this enormous team by a dozen and then to Berks Catholic the next day by 2. Catholic schools are allowed to recruit players which makes them tough but we defiantly could have beaten Berks if the Eagles would have been hitting their shots in the first half.
Posted by Mark at 5:26 PM No comments: 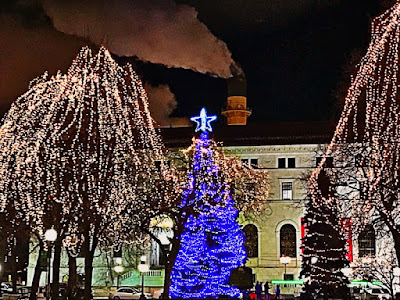 Saw Annie the musical last night at the Ordway Theater in downtown St. Paul. It was a well done production in a beautiful theater that I had never visited before. Had dinner with the whole family first, then took a cold two block walk to the show. It hadn't been above zero since Christmas Eve in those parts and was -12 when I woke up this morning. Back in DC now in balmy 28 degree weather.
Posted by Mark at 7:45 PM No comments: 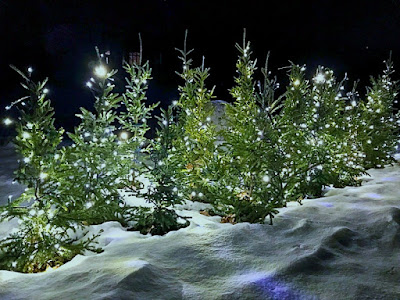 It never got above 0 degrees today and I didn't go out so much. Christmas Day is a good day for not doing much and that's exactly what we did.
Posted by Mark at 7:43 PM No comments: 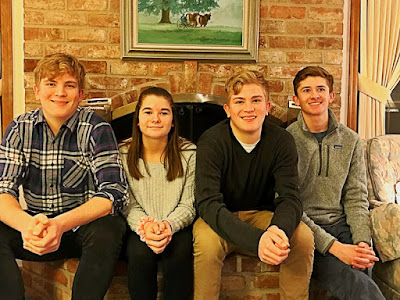 Or the festival of the undefeated sun, which is my holiday preference.
Posted by Mark at 11:48 PM No comments: 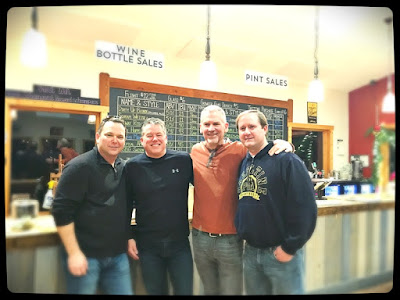 Fun afternoon at Schram vineyards and brewery in Victoria Minnesota. Got the old high school gang together, including the not pictured Dan Abts, Rob Porte and Anthony Burke.
Posted by Mark at 2:11 PM No comments: 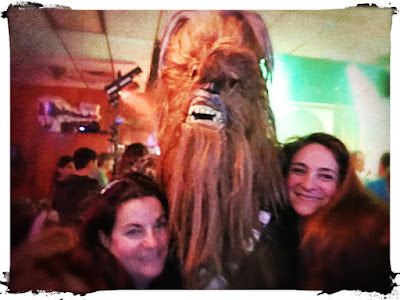 Chewy keeping Susie and Nicole warm.
Posted by Mark at 2:07 PM No comments: 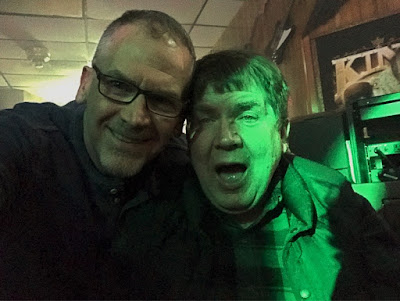 Jeff and I enjoying ELN'O.
Posted by Mark at 2:05 PM No comments: 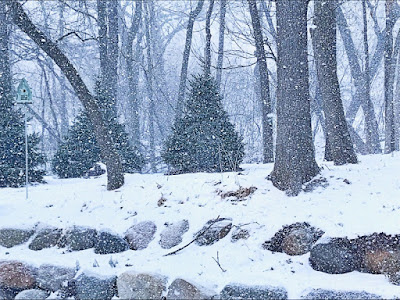 Getting some fresh powder on this Christmas Eve in Minnesota.
Posted by Mark at 1:32 PM No comments: 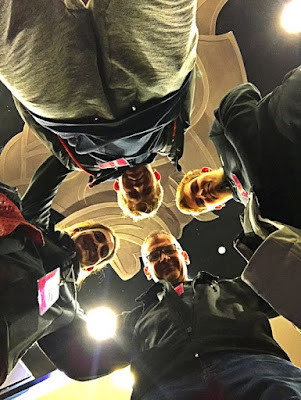 Fun tour of the new Minnesota Viking stadium today after a very early flight to MSP. This is us in the locker room.
Posted by Mark at 8:58 PM No comments: 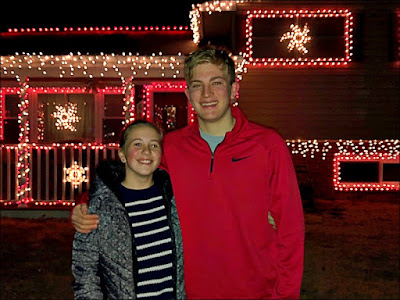 Fun night at the basketball game on Friday night.
Posted by Mark at 9:43 PM No comments: 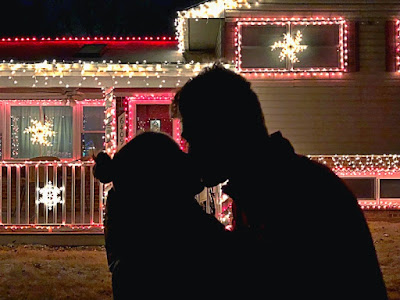 Jenna's house is very festive.
Posted by Mark at 9:38 PM No comments: 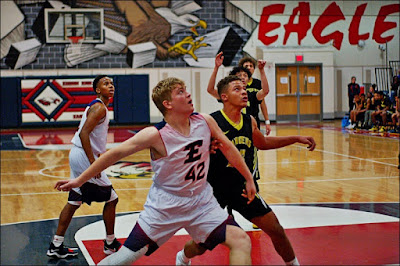 Boys both had games yesterday and Sam had an another one today. Three victories, two against Lee and an exciting overtime win over Laurel High today.

Dylan played well and had a couple rebounds and 2 points in the freshman team win. Sam played the most he's played all season in a lopsided victory, 87-44. He had 6 points and a half dozen rebounds and a bock in almost 12 minutes of play.

It was a little different story this afternoon against Laurel. We were tied or trailed most of the game. The team rallied from an 8 point deficit late in the 4th quarter and tied the game. They owed the overtime period and won 72-65. Sam had a total of 17 seconds in this game, it's tough to be the freshman in a close game.
Posted by Mark at 7:24 PM No comments: Were able to light some candles last night and opened a gift. They seemed pretty happy with the new phones. What 15 year wouldn't be happy with a shiny new appendage.
Posted by Mark at 9:01 AM No comments: 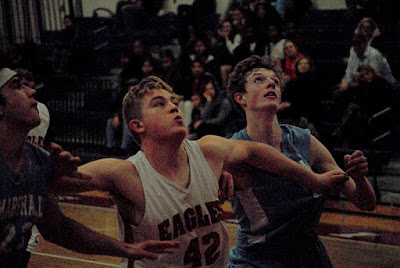 The first night of Hanukkah was spent watching two basketball games and eating dinner at 10pm. No candles for us. The freshman got beat by the Marshall Statesman in a lackluster performance but Dylan played hard as shown here. The varsity team beat the statesman in an exciting comeback. They trailed by double digits the entire game and were down 12 with 5 minutes to go before turning on the gas and winning by 3. They run a wicked press. Sam played a bit but the coach went with a smaller, quicker line up to really put the screws to the other team.
Posted by Mark at 8:32 PM No comments: 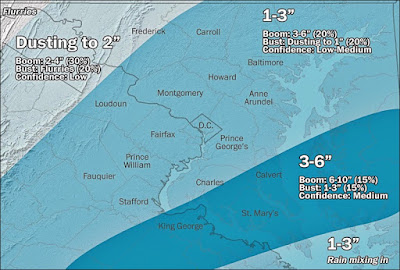 This iffy snow potential has caused the varsity basketball game and freshman practice to be cancelled tomorrow. I'm a little disappointed but snow would be nice and a free Saturday would be welcome. I do like watching the team play.

I started today at Dulles on a plane bound for Columbus. The door closed, then reopened because the landing gear was messed up. The delay was going to make us late for the meeting we were going to attend, so we (my boss was on the flight too) got back in our cars and went home. Not a bad outcome really.

We have a fire warming us tonight and the prospect of a long sleep and snow tomorrow.
Posted by Mark at 6:36 PM No comments: 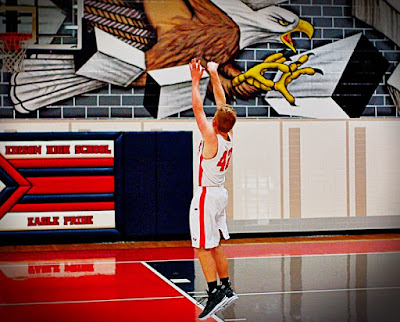 All three Edison teams won last night. The varsity beat the 12 best team in Virginia by 10 and Sam had his first varsity point, yes 1 point when he made the second of two at the Line. Good games by the freshman, JV and Varsity had Potomac scratching their heads during a long bus ride back to Dumfries.
Posted by Mark at 8:19 PM No comments: 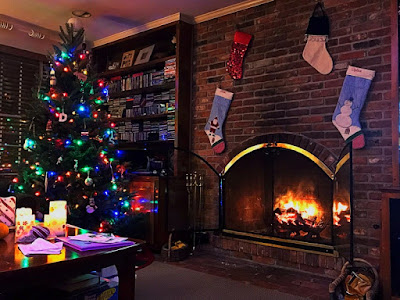 It took about a week from when the tree arrived in the house to finishing the decorating but it's done. We added a second tree in the front family room as well and I got most of the outdoor lights up as well. Now we just need some snow.
Posted by Mark at 8:46 PM 1 comment: 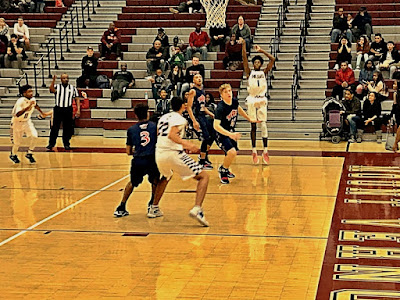 Well, a good win over the Mount Vernon Majors. Varsity is 1-1 for the season and the freshman team is 0-1-1. 4 more games this week.
Posted by Mark at 8:13 PM No comments: