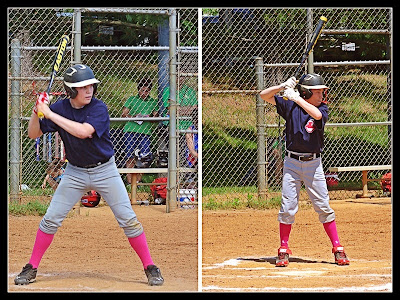 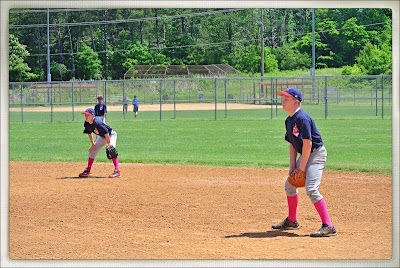 The boys played well today. Both got their bats on the ball and drove in 2 runs a piece. No strikeouts at all. Dylan fielded a hard grounder and tossed it over to Sam for the out in the inning they played 1st and 2nd base. That's brotherly team work. Sam had a rough inning on the mound but caught two solid inning while Dylan played half the game at 2nd and half in the outfield. They beat the Braves 10-9 and improved their record to 3-6-1. That's three wins and a tie in the lady four games. One more game on Monday night then the playoffs.
Posted by Mark at 6:46 PM No comments:

Cold rainy night means no soccer practice and a little time to just hang with the boys. Nicole is our with Adam in New York leaving us boys to fend for ourselves. It's turning out alright.

Sent from my iPad
Posted by Mark at 9:01 PM No comments:

Dylan is now the boy with lower leg issues.  Sam has had his share of stress fractures and bad shin splints but has actually been fine for almost a year now.  Dylan started having issues a month ago and while his don't see as bad they are still bothersome, particularity at night and first thing in the morning. The boys have been running hard all spring with a practice or game of some sort every day of the week except Sunday.  Baseball practice on Monday and Friday, Soccer practice on Tuesday and Thursday and basketball practice on Wednesday.  Throw in the soccer and baseball games on Saturday and that's a lot of pounding.  Baseball and soccer are about the wrap up and summer basketball games don't really kick in until July so a three week break should do a world of good for Dylan's rapidly growing legs.
Posted by Mark at 9:15 AM No comments: 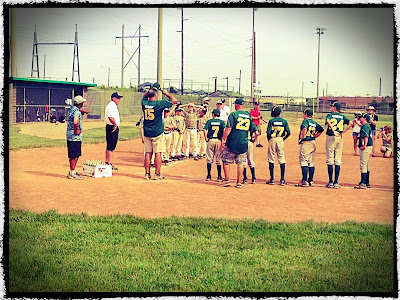 Our pool was closed today due to a severe pump problem so we traveled out to see the Pioneer tournament team play the championship game of the Manassas Memorial Day Tournament. The boys don't play on the tournament team because they play soccer as well as baseball and most of the team is 12 and more experience anyway. The trip did not disappoint with the Legend winning 5-4 in two extra innings. The boys now want to play on the tournament team next year, which means 3-4 games each weekend and a lot of driving around to tournaments. I missed the pool but it was fun to see some good baseball and hang with some parents of kids on our league team. Happy Memorial Day everyone.
Posted by Mark at 6:20 PM No comments: 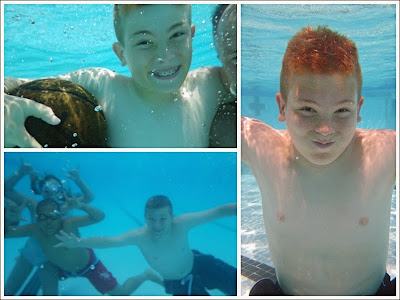 The pool opened yesterday and we spent 3 plus hours there today. The Wards and Calverts were there as well. Good people with kids Sam and Dylan's age. It feels good to get some vitamin D in the system.
Posted by Mark at 5:28 PM No comments: 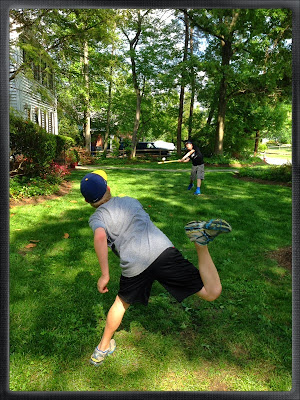 I do love these guys.
Posted by Mark at 4:45 PM No comments:

My children don't appreciate what they have and it's my fault.  I've helped raise two lovely boys but have given them just about everything they have wanted and things that I wanted them to have because it made me happy seeing them have it. Their mom and I have worked really hard and gotten really lucky to be in a position to provide them with things that less than 1% of the worlds kids can get and they don't have an appreciation of that fact and that it may not always be that way.  They carry around a view of the world that things can just be replaced if misplaced or broken.  Why break a sweat solving a problem when you can just brush it aside and move on to a replacement.

Dylan lost is "champions league" soccer ball at practice last night.  He asked for and I bought that ball for him a couple years ago because he really wanted it and I wanted to see the smile on his face when he got it.  Everyone was packing up at the end and his ball was missing. There are some woods behind the goal on one end and balls often miss the goal and end up in the brush but kids generally go get the ball when that happens.  His first reaction to the missing ball was to blame other people, including his brother.  His brothers reaction was to walk back to the car and climb in.  Dylan soon followed without looking for the ball.

One kid on there team actually started looking for the ball.  A very nice kid with what I believe to be immigrant parents of modest means.  This wasn't his ball or his problem but he understood the value of having a soccer ball.  I immediately sent them both back out to look but they continued to debate whose fault it was more than actually look. The other boy had to leave so Dylan and Sam gave up again which just about caused me to have a coronary.  They tried to explain that it was everyone else's fault and wanted to take no responsibility. I didn't want to be there waiting for them to find the ball either but the ball was their responsibility.

I joined them for the last hunt for the ball and as they continued to try to convince me that they were innocent and that the ball didn't make any difference, Sam spotted it about 18 inches off the field, behind a small shrub.

We have a dozen soccer balls in the shed. So many that I could start my own team.  They have $200 basketball and soccer shoes, expensive vacations, sports camps, ipads, $300 headphones, every advantage available and they choose the easy route when faced with a resource problem.  I didn't have it that hard either growing up but my parents were way more frugal then I am at this stage in the boys life.  I don't want to take everything away from them, I simply want them to appreciate what they have. I have to find a way to instill a sense of appreciation for all the advantages they have because I'm not going to be around forever to force them to find that soccer ball. 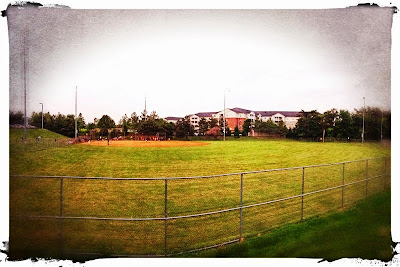 The little Indians won a close game in the bottom of the 6 after erasing a 4 run deficient. Sam got the game ball for is catching, pitching and field play. Dylan played well too and was getting some good wood on the ball. It was an exciting 8-7 win.
Posted by Mark at 10:38 PM No comments: 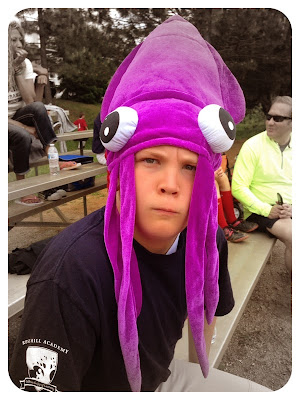 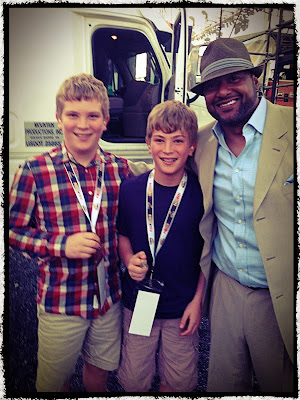 Dylan, Sam, Brad Jackson and his 2001 Ravens Super Bowl ring. Dylan is holding it in his right hand. They really liked that thing, I hope they don't want to start playing football now. Brad was a very nice man for letting them hold the ring.
Posted by Mark at 6:07 PM No comments: 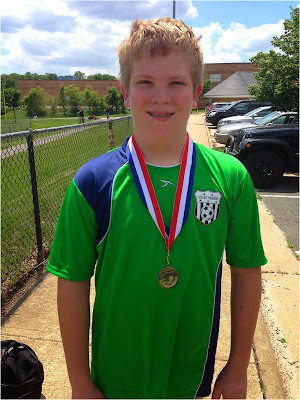 Sam got the MVP medal in today's soccer game. It was a tough 3-2 victory with Dylan providing a perfect crossing pass to Adele for the winning goal with less than a minute left. Sam had a ton of nice saves that kept the team in the game and he connected with Jud on a couple long goal kicks that ended up as goals for us.

The baseball game was a different story. We played a team from Arlington that only had 12 year olds on it. (Second year majors players). The team is also 4-0 in Arlington and have scored 57 runs and allowed 9 in those games. They beat us 14-2. Their pitching was intense but they were solid everywhere.
Posted by Mark at 5:43 PM No comments: 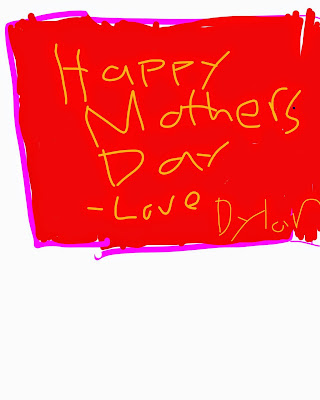 Better than hallmark as far as I'm concerned.
Posted by Mark at 4:54 PM No comments: 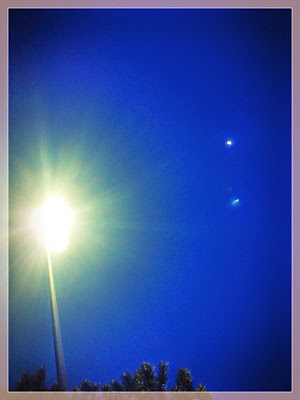 The boys play ball under the lights now. You can see the moon in the upper right of this shot. We have an early game tomorrow so no lights necessary.

Speaking of shining a light, I spent some time with the doctor that will likely replace my knee this fall looking at my X-ray yesterday. (Get it, light behind the xray). Anyway, I'm looking at getting this thing taken care of after the summer. It's just gotten to painful and is starting to limit my ability to climb stairs. That's not good. I think the last straw was the climbing of Mt. Vesuvius. It hurt quite a bit walking up but damn near killed me going down. I need to be able to hike, tour and wander with the boys and it's getting really difficult. I'm scared to death of the surgery and the months of recovery but I don't have any other options at this point.

I'm turning 50 this year and I'm getting an artificial joint. I think it was Mick Jagger who said, "what drag it is getting old".
Posted by Mark at 7:33 PM No comments: 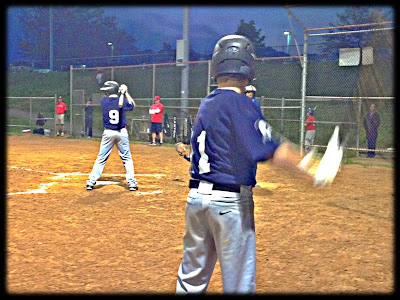 Sam at the plate and Dylan on deck. They are batting 5 and 6 now and had a good night. Dylan went 2 for 3 with a double and a single and 3 RBI's. Sam went 1-2 and a walk plus 2 RBI's. The team came a close call at the plate away from winning but settled for a 10-10 tie. They are gonna be tired tomorrow.
Posted by Mark at 10:25 PM No comments: 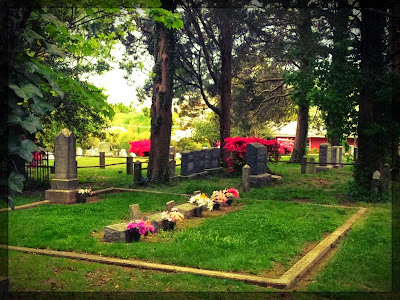 We've gotten both practices in so far this week. Batting yesterday and soccer today. It looks like the week is going to cooperate for all games and practices this week which is a good and bad thing. The boys are running around but we have no time to do anything else.
Posted by Mark at 7:40 PM No comments:

We had a make up soccer game today and the boys really hustled and came away with a 4-2 win. Dylan showed his aggressiveness and speed and came away with a goal while Sam had some nice shots and one that hit the post but was a rock in goal in the second half. The boys each had a goal this weekend which is nice.

We capped the day with some fielding and batting practice with their friend Aiden. The bonus is that I got a bunch of sun, turning this lily white body a little bronze.
Posted by Mark at 5:21 PM No comments: 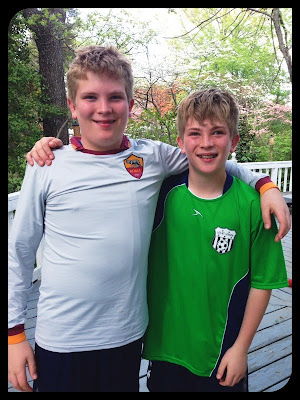 The baseball game was at 9 this morning and we put up a fight but fell to the Redsox 10-5. Dylan had his first trip to the mound and struck out a batter but allowed 4 runs on some errors in the field. He did hit a solid single and walked twice while Sam went 0-3 with a k and two outs at first base. Soccer was a little more successful with a 3-3 tie. Sam had a nice goal from a cross and Dylan hustled up and down the pitch but didn't connect on goal.

The weather is finally cooperating for sports and they have a make up soccer game tomorrow as well. My last fire was last weekend and I think the fireplace will be dormant until October. I'm already looking forward to that first blaze.
Posted by Mark at 5:48 PM No comments: