Don't seem to be working here in Oakland.

Took a ride on the Redwood Valley Railroad this morning. Lovely day for it.
Posted by Mark at 6:51 PM No comments:

Back with the Boys Back with the Boys
Originally uploaded by homerclees.

It was a long day of travel yesterday with the three hour delay then trying fighting rush hour traffic over the bay bridge but we got here. Just happy to laying around in the cool Berkeley air with the boys, a couple ipads and my mac book. We got another bonus when uncle Adam delayed his trip down to LA and stayed the night even if Nicole, Gil and Linda were feeling like they had 4 children in the house last night. Not sure what we are doing today but this in enough for now.

Get out of town
I'm looking forward to heading west for some cool weather and to possibly escape the political theater of the debt ceiling debate. The one thing I hate about DC is the politics and I've never seen it this bad. It simply drives me insane but I can't stop reading about it. As fortune would have it, I should be in Napa when these idiots we elected drive the car over the cliff and point fingers at each other. I really don't think it will be resolved and will make life more expensive for everyone, then taxes will have to go up. It's a lose, lose, lose proposition.
At least, the adults in the NFL have come to an agreement, yes, the NFL is more capable of settling differences and compromise than these career politicians. The NFL, where a majority of the employees barely graduated college with degrees in physical education and the owners who are mostly egotistical tyrants who either were born into money or won some sort of business lottery. Yes, that group realized that they would lose 9 billion dollars if they didn't come to some agreement and made a deal.
Thanks to the NFL, this fall, I can tune out the ideology wars on Capitol Hill and tune into football on TV. That will be nice.
Anyway, the boys are having a good time with Grandma, Grandpa and Adam out west and they are to distracted to really talk with me so seeing them will be good. I miss the little guys.
Posted by Mark at 10:23 AM No comments: Sending the boys off to Berkeley with Grandpa today. Gonna miss the little rug rats but they get to escape this heat and bask in the high 60's.we'll get a break next week. 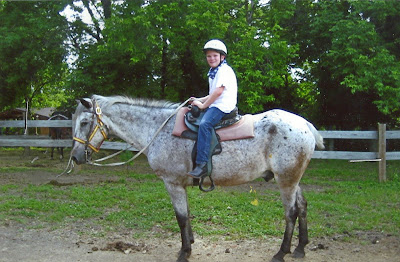 Here's Sam riding Cash at Camp Christmas Tree in Minnesota. This is the second summer in a row that included horses and I think they are getting the hang of it. Of course, these are pretty old horses, does Cash seem to be missing a tail? 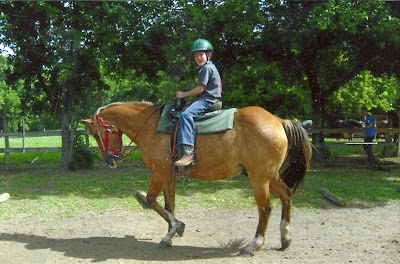 Here's Dylan on Poncho, who has a tail. The cowboy boots they got in Santa Fe last year still fit them so they are looking pretty stylish.
Posted by Mark at 6:27 PM No comments:

I just took the boys to the store for new shoes and for the first time, had to leave the boys section and buy shoes from the regular old adult shoes section for Sam. He got a brand new pair of K-Swiss size 8 today. Dylan is still at a 5.5 but Sam is sporting the big boys. Pretty amazing stuff. Nicole tried them on when we got home and they were snug but fit fairly well.
Posted by Mark at 8:09 PM No comments: The boys picked the hottest week of the year to run around on astro turf and kick a ball. It's going to be brutal out there. A weekend home before we send the kids out to Berkeley next Saturday. It was a beautiful day for the pool and the water actually felt refreshing from the few days we've been below normal temp wise. It heats up again next week and I won't have anyone to play catch with in the pool. Booo.

The waterproof camera is fun and I uploaded some experiments to flickr. www.flickr.com/photos/homerclees/sets/72157627210277754/

Super 8 Fishing
I took some iphone super 8 video of some of the fishing up on Lake Sylvan dropped it on You Tube. Nothing all the spectacular but fun all the same. It's gonna be a hot one today and tomorrow here in DC. I'm starting to look forward to Fall again.
Posted by Mark at 2:30 PM No comments:

Boys are back in town Boys are back in town
Originally uploaded by homerclees.

Grandma brought the boys back from Minnesota in once piece. The house feels right again. We did have a nice dinner with Jimmy T and Michael P last night and slept in this morning to take advantage of being kidless for a short time.

We got back in town yesterday, minus the boys who stayed behind to finish the week at Camp Christmas Tree. They are having a great time their riding horses, swimming, doing archery and other camp stuff. We miss the little buggers but just got done video chatting with them on Skype. Grandma is bring them back to DC on Saturday which isn't far away. Nicole and I are going to take advantage of the time and see Jimmy T for dinner tomorrow night. The house is strangely quiet without them so we need to get out. Pictures of the 12 day trip MN here. Great Wisconsin bought fireworks at the party we went to last night in Orono. About 20 minutes of some really big explosions means I don't have to fight the crowds at any of the local public shows tonight. The show last night was as good or maybe better than most I've seen. The guys even tried to sync it to music which partially worked. The boys are at the Twins game today and I'm doing a bunch of nothing. A little baseball by the barn. The most expensive angry birds ever. We got these at the Delano 4th weekend celebration in Delano MN. Those carni folk know how to get you to buy $20 worth of stupid games for a $1 worth of plush toys. Yes, that's about $80 worth of angry birds right there.