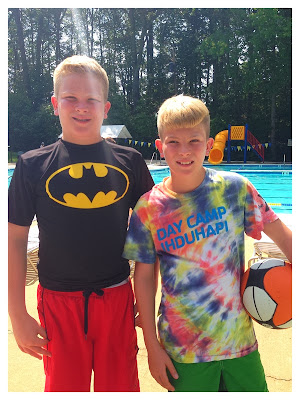 All four of us got haircuts from Patrick this morning with the boys getting some fancy soccer player inspired dos. Mine is not much different, trying to spare as much hair as possible Nicole got her bangs trimmed. That trip downtown may be the most exciting thing we do all weekend. We are going into old town for dinner tomorrow but this weekend is all about doing very little. We needed a low key few days before school started.

My only real hope is that I can get some good color at the pool to last me the winter.
Posted by Mark at 5:31 PM No comments: 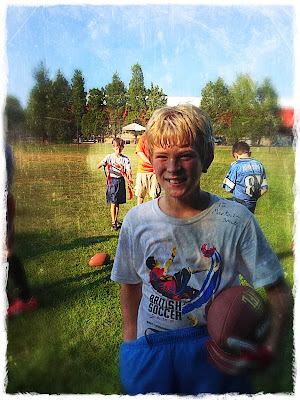 Yes, the football season has begun. We had our first practice tonight. The boys looked good.
Posted by Mark at 11:06 PM No comments: 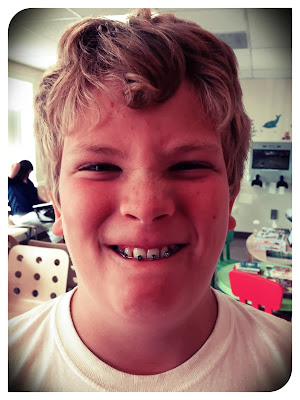 Sam is taking the whole braces thing pretty well. His teeth hurt a little right now but he'll get used to it. He still looks fantastic and I've prepared him with every derogatory remark I know that he might hear from other kids. He's ready.
Posted by Mark at 7:19 PM No comments: 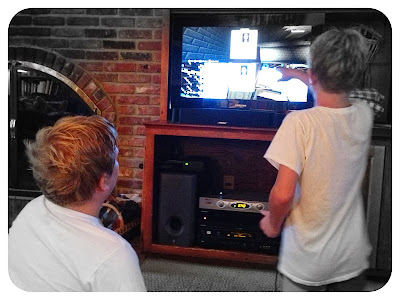 Playing Xbox, Wii or iPad games on a weeknight will be ending in just a few short days. The boys got their class assignments and met their teachers today. School starts Tuesday after a nice long weekend with very little planned. It was a fun and busy summer but its time for changing leaves, football, cold nights and raging fires. I know September is still pretty warm around here but it often gives us a preview of October and November.

Hard to believe the boys are in 5th grade already. They will be in middle school before I know it.
Posted by Mark at 6:49 PM No comments:

Roxy and the Boys 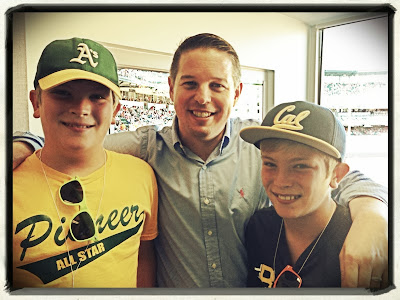 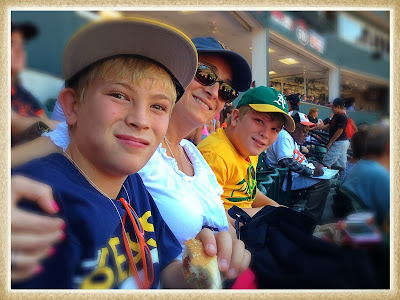 Our friend Roxy was in Baltimore with the Oakland A's and got us some sweet tickets right behind home plate for an Orioles beat down of the A's. Roxy is a sports announcer and works the A's and the PAC 10 football, basketball and I'm sure other sports. We spent some time in the booth where I was interested in Dylan's reaction since he is a future sports broadcaster. The boy is a database of sports knowledge but needs to work on the sports banter part. He's a little shy. It was a beautiful day for baseball.
Posted by Mark at 6:36 PM No comments: 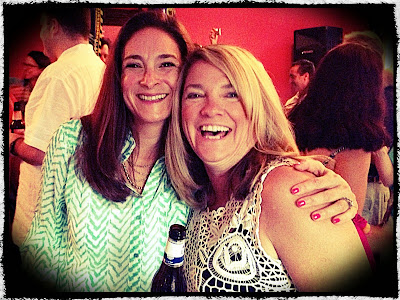 Steve's surprise birthday party was last night in Ellicott City Maryland. A cool old town just outside of Baltimore which I hadn't been to in 10 years. Good times and it was great seeing everyone.
Posted by Mark at 6:20 PM No comments:

Singing in the Rain 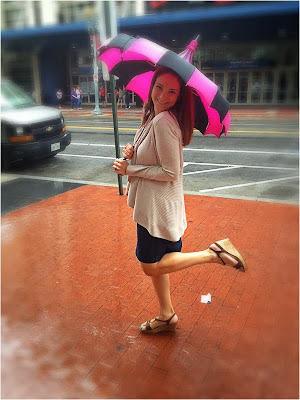 Nicole out for a mid day stroll.
Posted by Mark at 8:56 PM No comments: 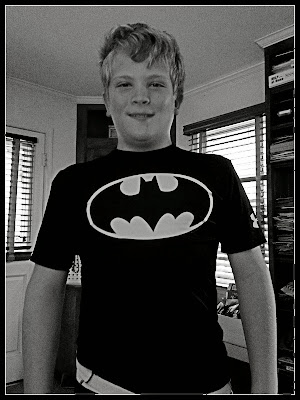 Sam wanted, and got a new workout shirt that he also wants to use when playing goalie in this fall's soccer season. Yes, he's batman.
Posted by Mark at 5:49 PM No comments:

They go to Eleven 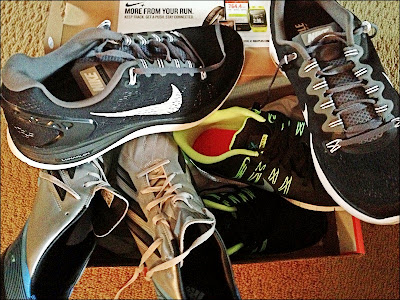 I went out and bought $350 worth of shoes today for the boys. They are no longer just satisfied with any shoe, they use their iPads to research shoes and have specific brands and reasoning behind their choices. Sam got one pair of running shoes and Dylan got new soccer cleats and running shoes. Sam is now wearing an 11' that's one size up from what I bought him about six months ago but Dylan is up to 8 and a half which is a size and a half up from 6 months ago. Dylan is currently on a little growth spurt, Sam is just growing.
Posted by Mark at 3:55 PM No comments: 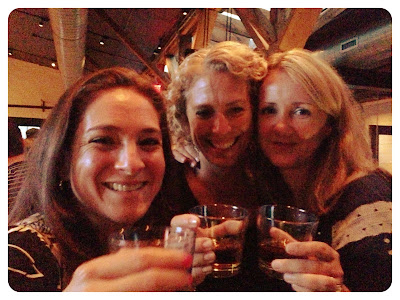 Girls doing shots, so mature.
Posted by Mark at 12:24 AM No comments: 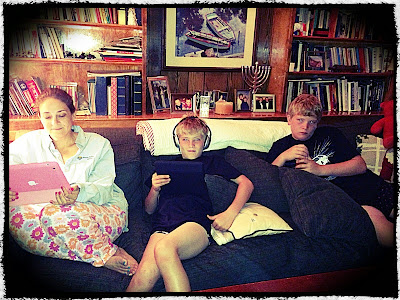 Dylan said he brushed his teeth twice over the 5 days at camp but besides that grossness, they had a great time but missed us a lot. We missed them too.
Posted by Mark at 10:55 PM No comments: 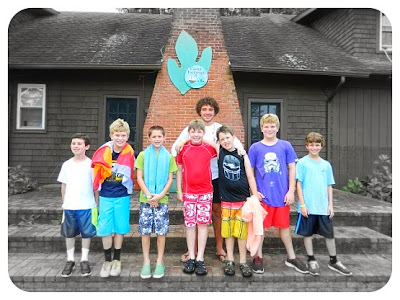 We have not seen or talked with the boys since Sunday which is a new record. I'm really looking forward to picking them up tomorrow. Based on a few pictures we have, they seem to be having fun.
Posted by Mark at 11:06 PM No comments: 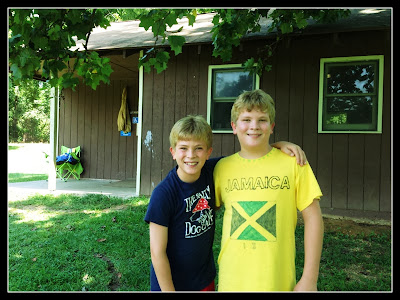 I got back into town this morning at 11am from my 30th reunion in Minnesota and we all drove out to the eastern shore to drop the boys at their first speed away camp. I think they were a little nervous but once we un packed them and set up their bunks they joined their cabin mates on the soccer field outside their cabin for some running and kicking. They didn't even watch Nicole and I drive away. Just kept playing. It's a nice little camp tucked away on the shores of the Chesapeake with about 200 girl and boy campers. Their counselor was nice and said they would be heading for the pool once checkin was over. All 7 kids were already set up in their cabin and everyone was getting along at this point.

I didn't see them all weekend because of my reunion in Minnesota but I'm glad I got back to drive them up there and see where they will be spending the next 6 days.
Posted by Mark at 5:14 PM No comments:

Coach Rich
Posted by Mark at 4:32 PM No comments:

I had a good conversation about sports with the boys today. I picked them up at basketball camp and Dylan drained two long baskets from the side of the hoop while Sam was showing me his new dribbling moves between his legs. They have both gotten really good from the Warriors camp and the one they are in now at Lee Rec Center. That got us talking about what they really want to focus on going forward. They are both good athletes and could play many different sports but I think they have it down to soccer, basketball and baseball.

They both want to try out for travel soccer in the spring so they are playing fall rec soccer to get more games under their belts. They are also playing flag football this fall but think its their last year of that because neither of them want to play tackle. They have seen my scar and all the limping around I do and made the connection that tackle football is not worth the risk. I have to admit, I agree with them. They will get recruited by other kids and adults thru high school. It's already happening. They would be a great addition to any football team. They are big, fast and aggressive but they seem pretty set on not going there.

Sam is already being recruited for the travel soccer team and I think Dylan has the skills. By not playing fall baseball, they will miss out on some opportunities to pitch, which would help them get in the rotation next spring but I think I can get them a pitching coach this winter for 6-8 weeks to get them up to speed.

It's fun watching them develop their skills and I'm looking forward to seeing them get out there and compete this fall.

Sent from my iPad
Posted by Mark at 6:16 PM No comments:

Here's a collection from a fantastic trip to the Great Northwest. We all had a great time and were exhausted when we got back last night. We all slept past 10 and now the boys are at Timmy's birthday sleepover which is allowing Nicole and I to catch up on some movies. 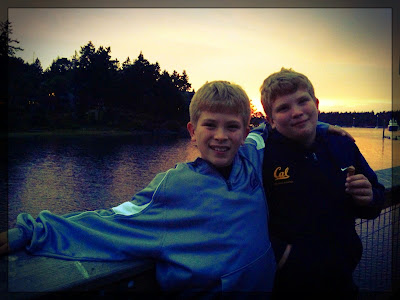 This was taken on Wednesday after our last dinner on the island. We are just a flight away from being home.
Posted by Mark at 11:02 AM No comments: 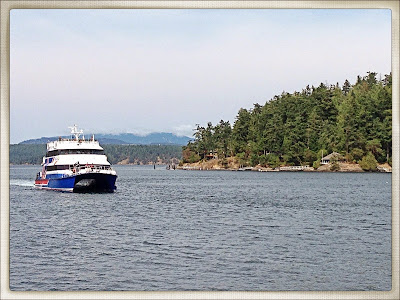 An easy 3 hour ride back to Seattle and we are now holed up in the airport Marriott before our flight tomorrow. It was a very nice getaway but its always nice to go home.
Posted by Mark at 1:25 AM No comments: 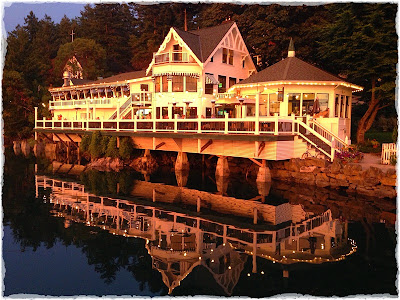 We went back up to Roche Harbor for dinner tonight and got to see the sunset. We've eaten in Friday Harbor the last couple nights, which is on the east side of the island. We've had a fun few days but its back to Seattle tomorrow and then on to DC on Friday. I think this was our favorite restaurant on the island but we had some nice meals at a couple places.
Posted by Mark at 1:12 AM No comments: