The Bulls won in another painful game to watch. Neither team had much energy on a hot and humid night and the pitching was particularly painful to watch. Sam pitched an inning and did pretty well but walked a couple kids. Dylan was hit by two pitches, walked and struck out. Sam had a home run (with two errors) and walked three times. Th final was 11-8 but the game was called in the sixth when the score was 16-12 due to darkness. The final score reverted back to the 5th inning. I'm glad that's over.

The boys are heading to kings dominion theme park tomorrow with the Clermont chorus. Lots of roller coasters and some singing. I'm heading to a board meeting in Baltimore.

Sent from my iPad
Posted by Mark at 10:36 PM No comments: 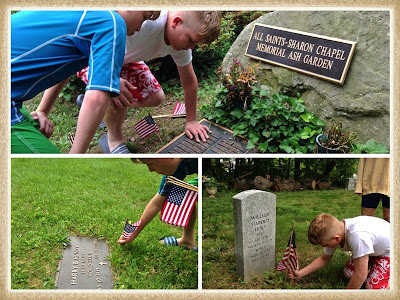 We visited our backyard nieghbors today and left some flags on the veterans graves. It's a nice little tradition we have been observing for the last few years.
Posted by Mark at 5:28 PM No comments: 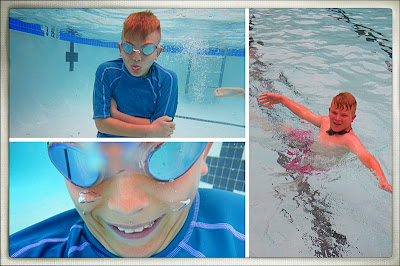 The air temp is 74 and the water temp is 70. Not much sun today so hypothermia was setting in quickly. It's going to be 90 next weekend and that chilly pool will feel awesome.
Posted by Mark at 4:09 PM No comments: 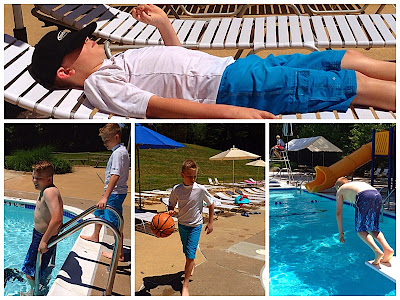 Two hours of a Carpenter's baseball practice and a couple hours at the pool has my elbow swollen and my skin slightly burned on this Memorial Day Sunday. Hitting infield practice, pop flies and pitching to the boys does a number on my elbow but they needed the extra workout. The pool was like a big ice bucket which was perfect for the elbow but kind of rough for the rest of the body. The sun did feel good on the face and this glass of wine is making it all better.
Posted by Mark at 6:05 PM No comments: 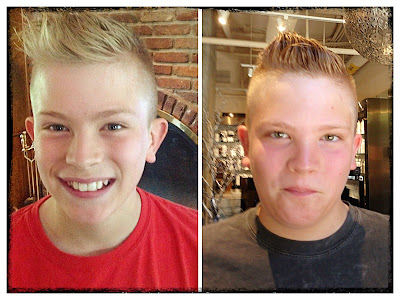 Both boys got what they considered to be Bryce Harper haircuts today. They do look cute and fairly fashionable. I think Patrick enjoyed cutting it as well. We are watching the Champions League final now. Good soccer.
Posted by Mark at 4:05 PM No comments: 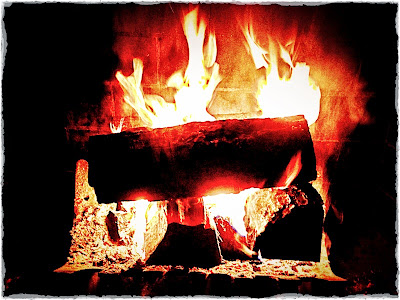 It hasn't gotten out of the 50's today and with a crisp north wind, it feels even colder. I couldn't resist building a fire. This whole spring has been a welcome reprieve from the treacherous summer we had last year. The electric bill I paid the other day was 400 kilowatt hours lower than the same period last year. (1,300 kwh in 2012 vs 900 kwh in 2013). That a lot less air conditioner time and I'm loving it. The pool opens tomorrow and I have a fire blazing. Not your typical Memorial Day but its supposed to be warmer by Sunday so I can start working on my tan which is greatly needed.
Posted by Mark at 6:31 PM No comments: 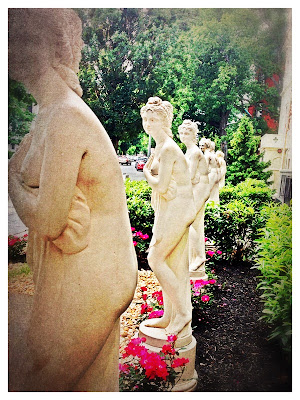 The boys came back from a 7-1 deficit to beat the Iron Pigs 15-13 last night in what was the sloppiest baseball game in a long time.  The Bulls were the the Bad News Bears for the first couple innings with everyone on the team missing tags, dropping balls and making ill advised throws.  Dylan and Sam lead the pack with some bad plays but at the same time, they had a couple of nice plays.  Dylan struck out once and walked twice, Sam had a single and walked twice.  Sam also had a three strike out pitching performance in the the last inning which preserved a 1 run deficit going into our last at bat.

With the game tied in the bottom of the inning with two outs and Dylan on third, Brock hit a walk off home run to take sole possession of first place in the Pioneer Minors division.  The good news of this sloppy game was that the kids didn't give up being down 7-1, then 9-5, then 13-12 with three outs to go.  They kept battling back and while the errors were many, the Iron Pigs had a few of their own.

No baseball or soccer games this weekend and a welcome reprieve from cringing in the stands.
Posted by Mark at 8:34 AM No comments:

We Got the Beat

I got to to hear the end of choir practice when I picked up the boys from school yesterday.  I couldn't help but notice that all the songs they were singing were from my high school years, in fact I have most of them on itunes and I queued on up on the drive home which they both sang loudly in the back seat.  Bon Jovi's "Livin on a Prayer" never sounded so good.  They are also singing a Go Gos tune and that feed africa song "we are the world"  The spring concert just might be entertaining but 4th graders singing the "classics" make me feel old. 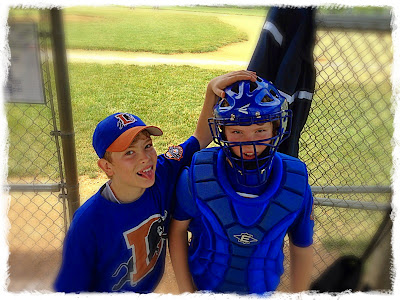 After three straight rain outs the Bulls took the field today and came up with a 15-12 win over the Knights. Dylan walked, was hit by a pitch and singled in the fifth, driving two runs home. He pitched in the 4th but struggled, allowing 4 runs. He did keep his cool and didn't let the walks mess up his head. That's a good thing.

Sam struck out, walked and hit a hard double. He also pitched the fifth inning and recorded 3 K's while walking one. He was really throwing hard and right down the middle. He kept the middle of their order from scoring and allowed the Bulls to go into the last inning up 7 runs. It was a good game for both boys.
Posted by Mark at 8:01 PM No comments: 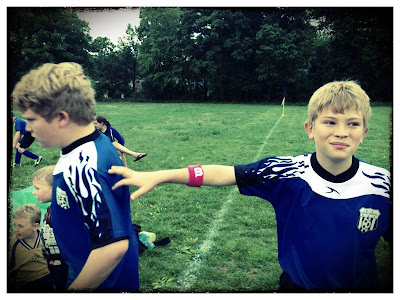 Baseball was rained out today, which was good because we got to play the soccer game that was scheduled at the same time. The team was playing well after going down early 1-0 when Dylan scored the tying goal on a heads up play right in front of the goal. Sam had some nice shots on goal and som of the other kids just missed on some good passing by the team. Everything was looking like a tie when one of our kids had an own goal. He was devastated but the rest of the team kind of gave up with a minute left and let the other team score an easy one losing 3-1. This soccer team they've been on is kind of cursed. Many of the kids have gotten much better but they don't get the breaks. Maybe next week.
Posted by Mark at 5:16 PM No comments:

I love hanging around the house on Friday nights. The boys are back from soccer practice and Sam and I are making fun of a bad paranormal tv show while Dylan is watching sports on his iPad. Nicole is out picking up something at a craft store but we will soon be watching a movie and eating pizza together. I could hang out at home for long periods of time but its important to get out and see grown ups too. We are doing that tomorrow.

Sent from my iPad
Posted by Mark at 7:23 PM No comments: 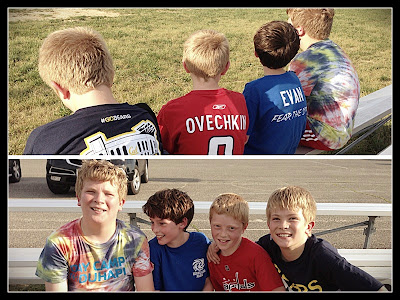 The boys do like their soccer teammates. It was a nice and warm day for practice but they didn't want to leave when I came to pick them up.
Posted by Mark at 9:59 PM No comments: 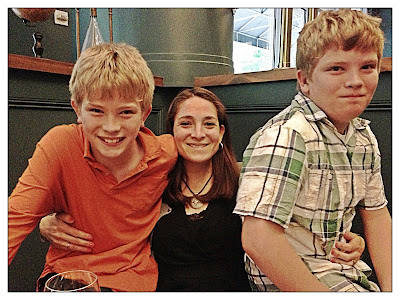 We had a nice dinner last night in Alexandria and came home to open presents. I didn't post a picture because I was exhausted from a couple long days at work. I need to run to my guitar lesson now but the weekend is almost here and we can slow things down.
Posted by Mark at 7:59 PM No comments: 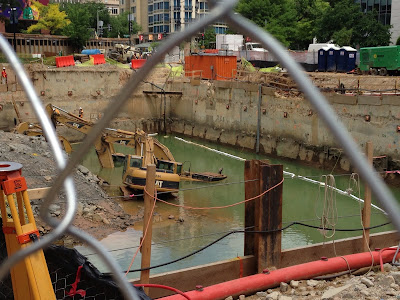 A construction site down the street from my office became a lake over the weekend because of a water main break. This hole was filled to the top for most of the weekend and these construction machines are probably pretty messed up. That's going to put this building behind schedule.
Posted by Mark at 9:25 PM No comments: 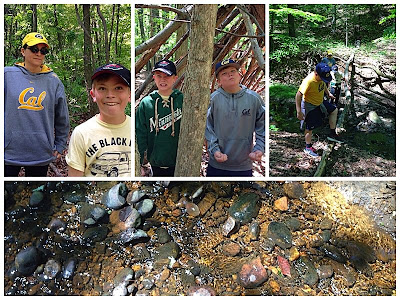 We have had a pretty low key Momma Day with a trip to our favorite bagel shop for breakfast, a hike in the woods and some baseball practice. I'm going to give the grill a try tonight to put a BBQ ending to a nice day.
Posted by Mark at 5:00 PM No comments: 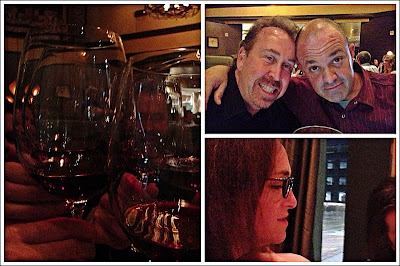 We celebrated three birthdays last night in Bethesda. Patty, Abe and Nicole are all getting a little older within a week of each other. It was a fun night with some great food and wine. It was good to get out and hang with some adults.
Posted by Mark at 4:37 PM No comments: 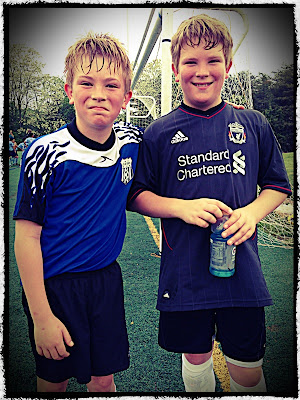 After a two year draught in the win category, the boys soccer team pulled out a 4-2 win in a rainy game this morning. Dylan scored a goal and Sam scored 2 while also playing two shutdown quarters in the goal. The whole team was pretty excited about getting that monkey off their back. It's too rainy for baseball today so we are done with sports this weekend. Of course that means we have a soccer game and two baseball games next weekend but that's a week away.
Posted by Mark at 10:38 AM No comments: 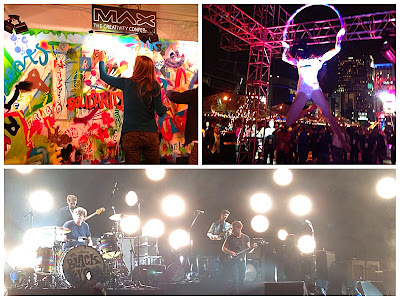 I took some pictures from the Adobe event I attended this week but they didn't turn out all that well. The closing party was fun on Tuesday with women on trapeze and a performance by the Black Keys. Sitting at home on a Friday night and happy to be doing it.
Posted by Mark at 7:03 PM No comments: 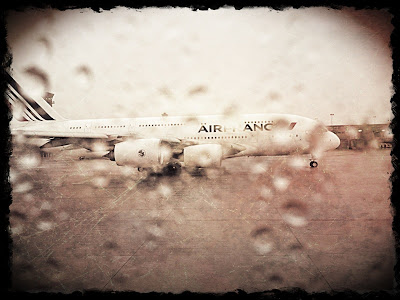 Yesterday's flight was all on time until we got about 100 feet from the gate. Lightning was spotted and all ground personnel headed for cover so we sat for an hour and a half waiting for a guy to guide the plane to the hate with those orange wands. For some reason, the ground crew didn't have an issue with backing this air France A380 in a driving rain with lots of lightning. I felt bad for the guy under the nose of this monster unhooking the barge and giving the pilots the go ahead. I wish he would have done it for our plane.

It was fun seeing Tony, Bill and Kumie in LA but its good to be home too. I think I'm business trip free for a couple months which is a good thing.
Posted by Mark at 10:52 AM No comments: 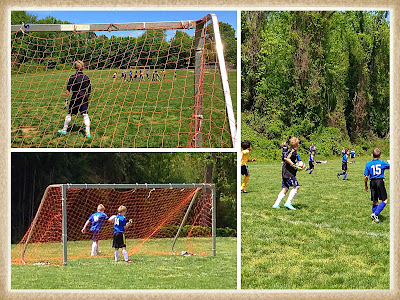 We ran to a Kentucky Derby party right after baseball and got home pretty late. Sam said his throat hurt from laughing too much at the party. Good times.

I'm in LA now for a couple days and should be seeing Kumie any minute and tony and bill tomorrow.
Posted by Mark at 10:20 PM No comments: 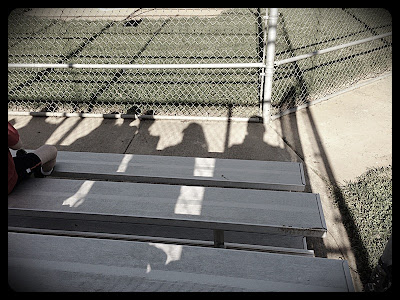 The Bulls lost their first game tonight. Losing to the River Dogs 10-9. The boys were a little off in the pitching department. Timmy had a rough first inning, Broc pitched a couple good ones and Sam and Dylan struggled. Sam had a nice double and single but popped out once. Dylan was out on a bad call at first and struck out twice. The boys gave up five runs between them but struck out 2 each. They are still up beat and ready for another game Saturday.
Posted by Mark at 8:44 PM No comments: 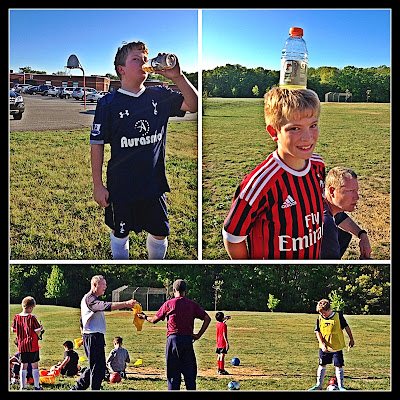 It looks like the boys can play both soccer and baseball this weekend but its going to be close. They do like both sports but the schedules have not synced well this year. Regardless, all the practices and games keep them active and running around which is a good thing. I think the soccer team misses their competitive intensity as well, not to mention Dylan's balancing skills.
Posted by Mark at 6:59 PM No comments: