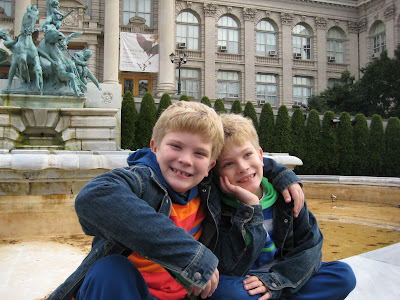 We really did have a good time in New York last week, even with the 7 hour trip home. We packed a ton of stuff into five days and they boys didn't want to leave on Saturday morning. I didn't get any pictures but the boys went to the samurai exhibit at the MET on Tuesday and then we walked the Brooklyn Bridge before Nicole and I saw Finian's Rainbow with Adam and Emmy while the boys and grandparents went to the Incredible Mr. Fox. On Wednesday we saw Shrek the Musical, which the boys loved. Thursday morning we went up to the New York Botanical Gardens in the Bronx where we saw the holiday train display. The US Botanic Garden has a holiday train display with DC buildings that we have visited a couple times over the years but this one was all New York buildings.

On Friday we took the boys to the Intrepid Aircraft Carrier Museum on the Hudson. We went there back when the boys were about 3 but they had forgotten completely that they had been there before. We also decorated Adam's first ever Christmas Tree which was fun. It was also nice to hang out with Linda, Gil, Adam, Elaine and Emmy. Not to mention Emmy's dog Cinnamon, with whom Sam really bonded. Well, it was either the dog or Emmy herself that kept Sam begging to take the dog out for walks. I think he had a crush on the girl, not the dog.

Two weeks till Hanukkah and four weeks till Christmas. It's a busy time of year.

Don't forget to click on the links above to see the many pictures, many of which were taken by Sam and Dylan. I've started giving them the small cameras while I focus on taking movies.

Back from New York Back from New York
Originally uploaded by homerclees.

Had a long trip back home today thanks to a burning semi on the new
jersey turnpike. Not a great way to end a fun 5 days on the city.
Adams place is fantastic but the one thing it lacks is a fireplace. I
have a big blaze going right now and I'm trying to melt the stress
away before getting in my own bed and sleeping for a good while.

In this picture they are looking tough in the grand central terminal
subway station. I think it looks like their first album cover. Dylan taking after uncle Adam after our chilly trip to the Intrepid
Aircraft Carrier museum on the Hudson. We are now back at the boys
favorite restaurant just off Washington Square. Adam is having a post
thanksgiving party tonight then back to dc tomorrow. The boys took a ton of pictures of the trains and NY buildings built
out of plant material. The garden is a really nice park in the middle
of the Bronx. We need to visit again when we have more time to
explore. I will post a Flickr gallery later with all the cool photos. The play was really good. We ended up going backstage to meet the
actors and check put the amazing set. This was the boys favorite show
to date and while their are not a lot of memorable songs, the
production was fantastic.

Lots of cooking going on tonight. I will be doing a lot of wine
drinking. Ready for shrek
Originally uploaded by homerclees.
Posted by Mark at 1:59 PM No comments:

Look to the Rainbow Look to the Rainbow
Originally uploaded by homerclees.

Saw a nice production of Finians Rainbow last night with Nicole, Adam
and Emmy. Not a musical I knew very well but it had a few numbers I'd
heard before like Devils Moon and that rainbow song. Off to see Shrek
the musical with the boys and the entire Duritz crew in a couple
hours. A contrast of old broadway and new in less than 24 hours. Cal Sam
Originally uploaded by homerclees.
Posted by Mark at 6:17 PM No comments:


Map your trip with EveryTrail
Posted by Mark at 4:58 PM No comments: Well, safely here, now uncle Adam is going for a sack in the kitchen. 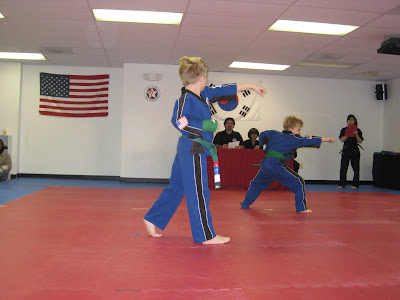 The boys got purple belts on Saturday and are that much closer to black. Getting ready for Thanksgiving the rest of the weekend. This year has gone fast. 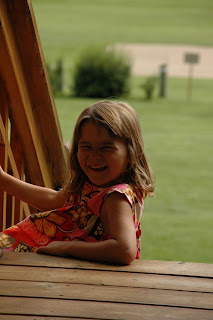 It's beginning to look a lot like...
Originally uploaded by homerclees.

Found this on the way home from school tonight. A little early in my
book.

Another Bone Bites the Dust Another Bone Bites the Dust
Originally uploaded by homerclees.

Sams right arm this time. He didn't want to be out done by his brother.

Winding down the weekend Winding down the weekend
Originally uploaded by homerclees.

A couple of fires, 4 movies, a cancelled birthday party and a likely
broken arm for Sam as the weekend ends with some reading. Sam did
something to his arm at school on Friday and while we iced it and
wrapped it in a bandage all weekend, the swelling is still there and
it obviously hurts a fair amount. We will take him for an xray
tomorrow and hope he doesn't need a cast for 6 weeks.

Nicole left the house a number of times to run, take the kids to the
air and space museum and hang out with the girls but I never left the
compond. It felt good to stay at home for a couple days. We have a
busy few weeks ahead so a lot of nothing this weekend was good stuff.
Oh yeah, the vikes won again. Nice. 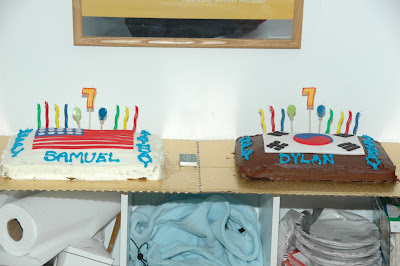 The Tae Kwon Do studio is not the best place for pictures, something about the lighting in that place but I found a bunch of pictures that show the crazy fun of a karate birthday party. All that kid energy is better released on a place with mats and tough walls than our house. It's been a rainy week of work and school but the Nor'easter is pulling away now and 70 degrees is back in the forecast for Sunday. I do plan on doing a whole lot of nothing this weekend. Need to relax before the Thanksgiving, Hanukkah, Christmas and New Years sprint. It's a fast time of the year. 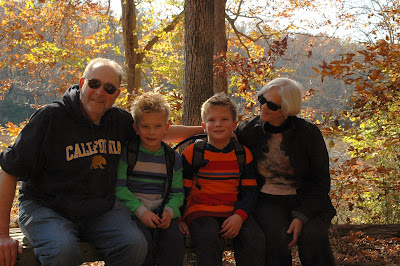 Great day for a stroll in the woods. I think we are getting a last few days of warm weather before winter starts showing its face around these parts. Busy weekend with all the boys birthday festivities but they seemed to have a great time eating lots of cake and getting a lot of loot. The toys are everywhere and now it's just a matter of trying to find a place to put them all. The boys loved having the grandparents and Aunt Elaine around all weekend but it's back to school and work tomorrow and I guess more toys over the christmakka holiday.


Map your trip with EveryTrail
Posted by Mark at 2:46 PM No comments: 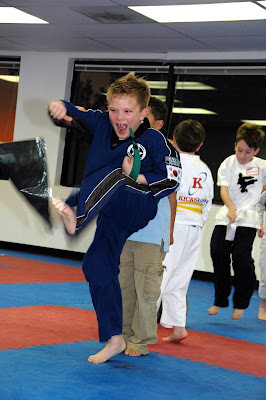 Having a kick at the birthday party. 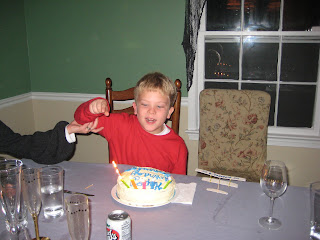 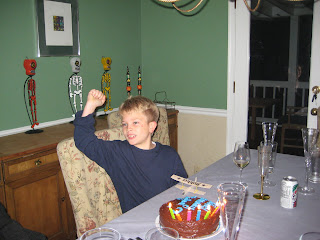 Should have posted this yesterday but was tired after all the birthday fun. The kid party is tonight but fortunately, it's at the Tae Kwon Do studio and not in the house like last year. The boys are pretty hyped up but I guess you only turn 7 once.
Posted by Mark at 1:23 PM No comments: 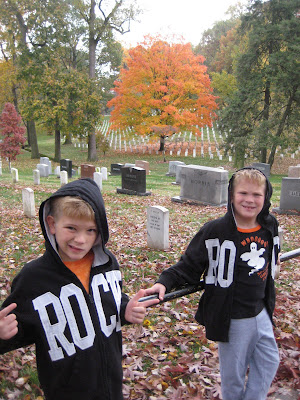 We boys all got our hair cut on Saturday morning downtown and on the way back we decided that a stop at Arlington National Cemetery would be just right for a kind of a misty, rainy day. It really is a beautiful cemetery and something the boys had never seen which was a shame due to the fact that we live about 5 miles from it. Living with a cemetery in the our backyard makes the whole thought of buried people pretty normal to them but they were very impressed with the fact that some many of the people buried there served their country and were in some of the wars they know about.

They really liked the tomb of the unknown soldier where we saw a wreath laying with a bugler playing taps and all that stuff. The rest of the weekend was pretty low key with a bunch more rain, some trick of treating, a couple of fires and a Viking victory over the Packers. Good times...