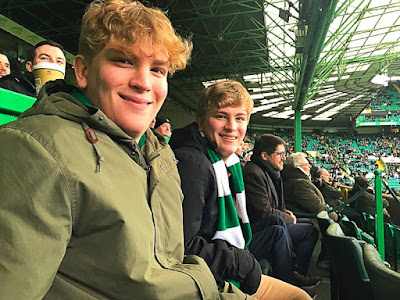 We got a ride from the hotel, a history lesson on Celtic FC, a trip to the pitch with the club director, access to the directors suite and seats in the directors section at mid field. Can't get much netter than that. The guy right past Dylan is Dave, a concert promoter in the UK and the guy that made this all work. Great fun and our hats off to uncle Adam for making a few calls to hook us up.
Posted by Mark at 6:12 PM No comments: 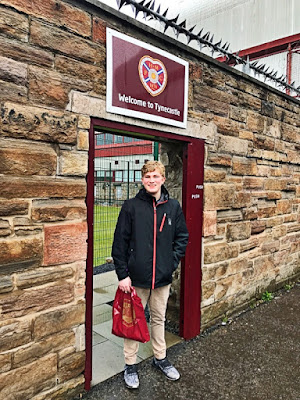 Dylan and I took a trip outside the center city a bit to visit Tynecastle, the home of the Midlothian football club and buy a jersey. Dylan knows a lot about this Scottish premier league club, we talked about on the walk to Murrayfield stadium, home of the wanderers and Scottish rugby. Fun afternoon. We all started the day at the Edinburgh dungeon. Cheesy as hell but fun for a slightly dreary day.
Posted by Mark at 6:10 PM No comments: 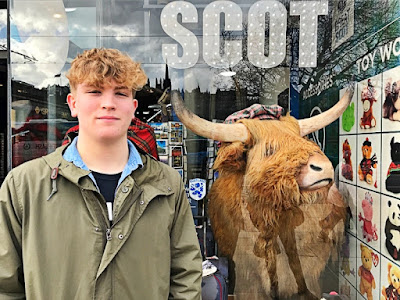 Sam shares his new hair style with the Scottish highland cow the Heilan Coo.
Posted by Mark at 2:07 PM No comments: 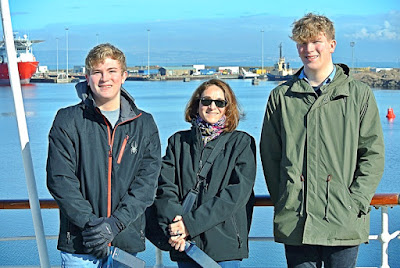 Toured the HMS Britannia this morning on a bright and crisp morning. It was the royal yacht for 45 years and now a museum. We had lunch in my new favorite pub in Leith then toured the Palace of Holyroodhouse, the queens Edinburgh castle. Nicole and I wandered another few miles to get some more steps in as the boys lounged around the apartment.
Posted by Mark at 1:31 PM No comments: 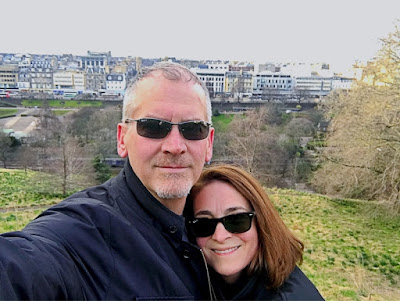 Nicole and I went out walking yesterday afternoon while the boys did there electronics thing and played table tennis. We found a steep path up to the castle from the bottom of Princes Street Garden that helped add a bunch of steps to our Apple watches. Gotta get some exercise in somehow while on vacation. We have complete blue skies today, need to get moving to go see the Royal Yacht Britannia.
Posted by Mark at 3:12 AM No comments:

Queen of the Castle 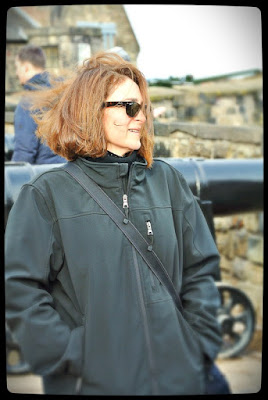 Edinburgh castle
Posted by Mark at 2:04 PM No comments:

King of the Hill 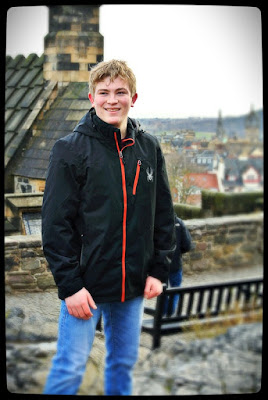 Dylan at Edinburgh Castle.
Posted by Mark at 1:45 PM No comments: 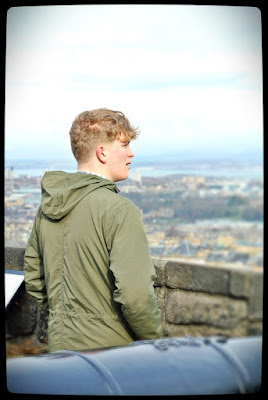 Sam looking out from the castle.
Posted by Mark at 1:40 PM No comments: 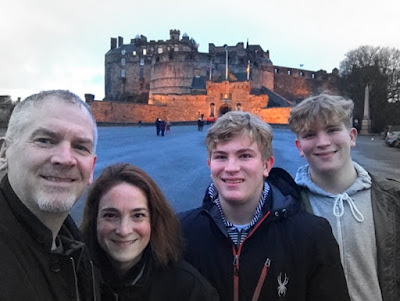 We are going back up there for a tour this morning. It's less than a mile from our apartment, but straight up hill.
Posted by Mark at 2:38 AM No comments: 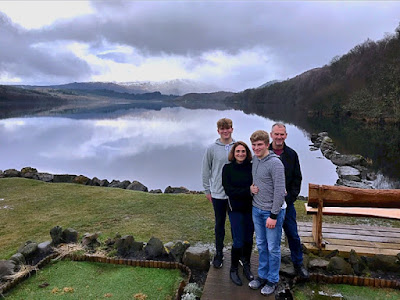 Spent a great day touring Stirling And Doune Castles and the beautiful Scottish highlands. We hired a private guide and the boys love the Range Rover and kilt he wore. The day started s little wet but brightened nicely as the day wore on. We walked up to the Edinburgh castle before dinner tonight and had Italian in Old Town before I beat the kids in multiple games of ping pong in the apartment.
Posted by Mark at 6:08 PM No comments: 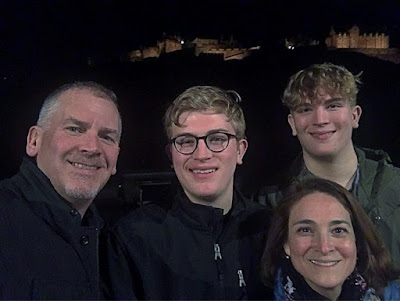 We left DC at 10pm which is late for a transatlantic flight and only got to Scotland at 3 after after layer over in Dublin. Nicole and I explored a little while the boys laid around. We all went to dinner on Rose street and too this selfie below the castle. On to a tour of the highlands today.
Posted by Mark at 3:03 AM No comments: 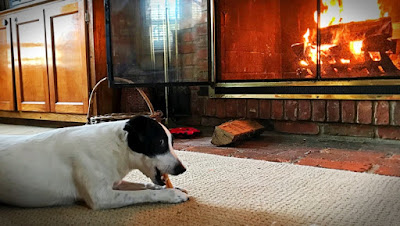 Flyer is eating a rawhide while lounging by the fire during his visit to Chateau Durpenter. We get him for a few nights.
Posted by Mark at 5:51 PM No comments: 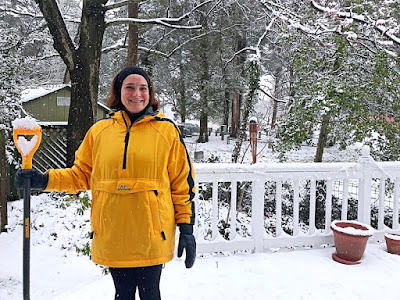 Nicole got some shoveling in today but the snow is pretty wet and starting to disappear. We got 4 inches and it's better than nothing.
Posted by Mark at 4:59 PM No comments: 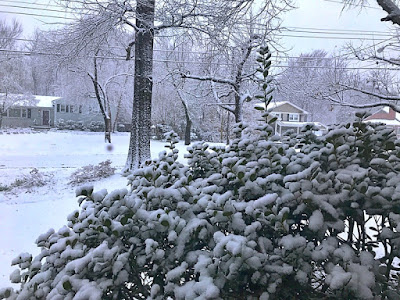 We finally got a reasonable snow storm in this winter of the dc snow hole. Most storms either hit south or north of us. While 4-6 inches is not crippling, it is a welcome taste of winter on this 2nd day of spring. I returned from New Orleans a day early to avoid travel issues and an sitting with the whole family at home with a fire going in the fireplace.
Posted by Mark at 11:28 AM No comments: 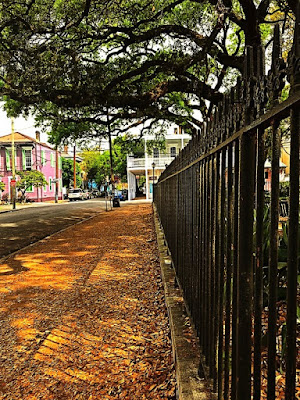 I have gotten up early the last couple of days and walked the French quarter. I found a nice little cafe about a mile and a half from the hotel on Frenchman street and eaten a healthy breakfast then zigzagged my way back to burn it off. It's amazing how quiet some of the quarter is just blocks from bourbon street. It's a very pretty city with an air of decay that you know will eventually overcome all the attempts to hold it back. It's only a question of when.
Posted by Mark at 1:45 PM No comments: 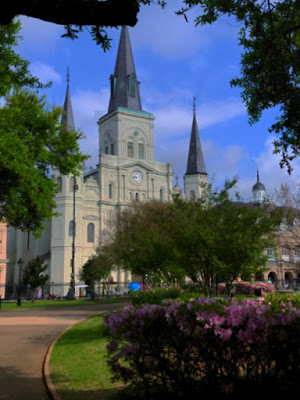 Calling this place home for a few days. I'm gonna stay with official business today. The saint Patrick's day craziness has already started and it only 10am.
Posted by Mark at 11:26 AM No comments:

Dylan and Sam can be seen on the left part of this image getting ready to cheer on the Edison Girls Varsity basketball team in their state championship game. I know they both wish they were playing but supported the program like they should.
Posted by Mark at 10:58 AM No comments: 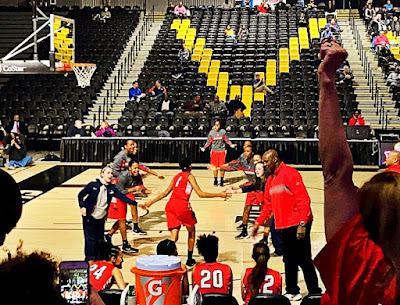 The boys lost their semi final game on Tuesday but the girls won. We are all in Richmond cheering for the Edison girls in the state final. Go Eagles!!
Posted by Mark at 2:22 PM No comments: 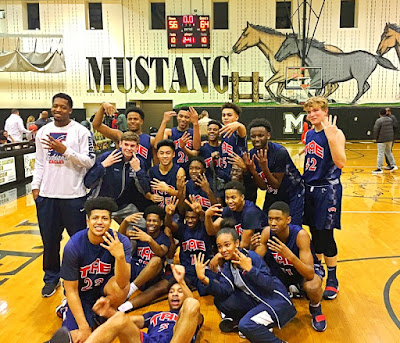 The boys are heading to a state semi final game against our division foe Wakefield on Tuesday after beating the #1 rated team in the state of Virginia. The winner on Tuesday goes to the state final in Richmond.

Yesterday's game had a fair amount of drama attached with the bus getting caught behind a downed, high tension power line that fell on interstate 64 outside of Charlottesville. They ended up sitting n the highway for 3 hours and arriving for the game an hour and 15 minutes late. Nicole, Dylan and I drove down in 70 mph gusts of wind and downed trees along along route 29 but were unscathed. The drive home was trickier but we made it back by 1am.

The eagles played well when they finally got to the gym. They warmed up for 30 minutes minutes and then pressed Albemarle High School until they broke. We trailed the entire game until going up by 1 with 3 minutes left then building an 8 point winning margin. It's fun but stressful. Tuesday will be no different.
Posted by Mark at 9:36 PM No comments: 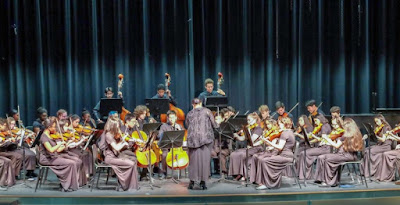 Sam is ending his time in orchestra next year because it just isn't conducive to sports and some electives he's interested in. It's too bad because he was getting pretty good but he doesn't love it.
See if you can find his floppy blond hair in this shot.
Posted by Mark at 8:24 PM No comments: