Just back from a party with the kids and settling in for the last hour of 2013. It was a very good year in my estimation. 2014 looks good from where I'm sitting at the moment. Let's hope it stays that way.

Sent from my iPad
Posted by Mark at 10:53 PM No comments: 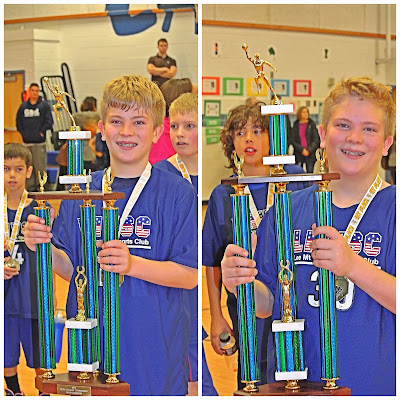 The boys made it back to DC in time to play two of the four games of the BRYC Holiday Tournament and ended up winning the whole thing. The team went 1-1 yesterday with a 1 point loss to the team we beat for the championship today. We won our first game this morning and played McLean for the championship at noon. It was a close game until the end when the Patriots pulled away and overpowered the Spartans 40-34.

The McLean team was good but had some horrible coaches. The team was full of itself in general and believed that Sam and Dylan were added to the team after the loss on Friday. I'm not sure where they thought they came from but it just added to their overall poor sportsmanship. Their coach was nearly booted from the game for bad behavior and the kids mimicked their leadership with one kid refusing Sam's hand as he offered it to help him up after he went to the floor. It's 5th grade basketball people, get a grip.

The boys were a little rusty from the field with Sam scoring 12 and Dylan 4 in the two games. They did rebound well with Sam pulling in more than 25 and Dylan napping a dozen. We are in division 1 and will have a lot of tough games this year so it's nice to get a tournament win under our belt before going head to head with the toughest 5th grade teams in northern Virginia.
Posted by Mark at 7:52 PM No comments: 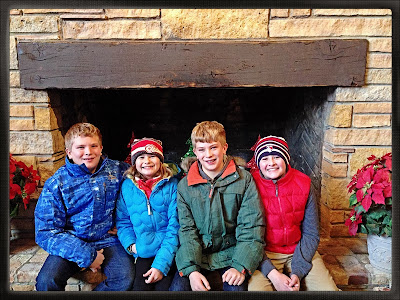 We saw Toad and Frog today at the Old Log in Shorewood today. It was a cute little show and everyone's favorite character was Snail. We had a nice dinner at Spazzo and are getting ready to head home tomorrow. It's been a great trip to Minnesota. We got snow every day and the four inches on Christmas Eve was a treat.
Posted by Mark at 9:36 PM No comments: 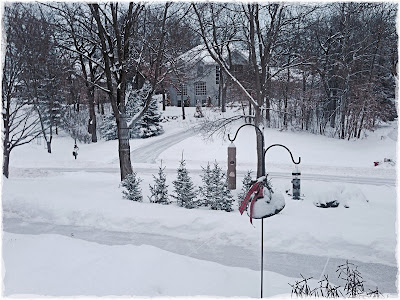 Not much going on beyond a little sledding in the new snow and the boys listening to their new beats. I took a nice little nap and now we are getting ready for dinner. A perfect Christmas Day.
Posted by Mark at 6:45 PM No comments: 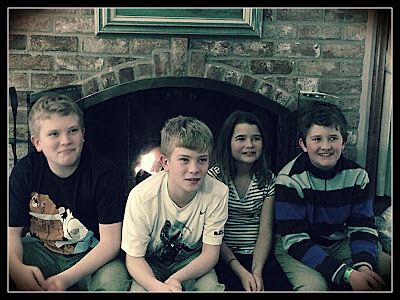 The annual Christmas picture in front of the fire. The kids are getting old.
Posted by Mark at 9:18 PM No comments: 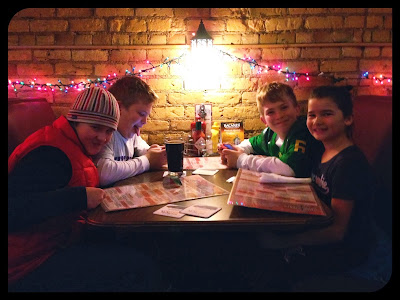 Dinner at Mainstreets with the kids in their own booth. It made for a much nicer adult conversation at the table a short distance away. It's been cold here today so we went bowling. It will get down to -15 tonight then warming up to the teens tomorrow so sledding will back on the table, maybe snowshoeing on Long Lake. It's a winter wonderland around here.
Posted by Mark at 8:59 PM No comments: 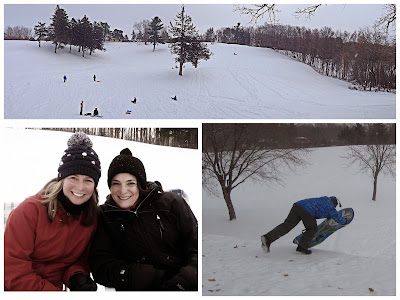 It basically snowed the entire day which made it perfect for a couple hours at the Orono golf course sledding hill. Snow is in the forecast for the next few days, so a white Christmas is definitely in store this year. It's only going to be around 4 degrees for a high tomorrow so indoor activities are going to be on tab but we will have to get back on the hill before we leave later this week.
Posted by Mark at 10:05 PM No comments: 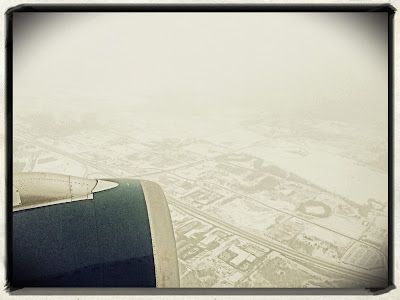 It looks like their is plenty of snow in Minnesota. Bring on the sledding.
Posted by Mark at 7:04 PM No comments: 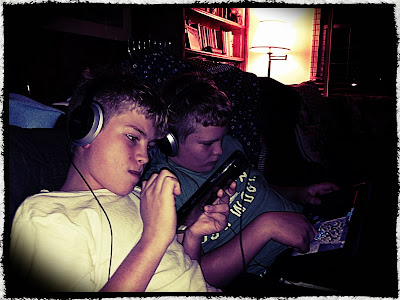 A little shopping and some work around the yard with a workout for all of us is about all we had going on today. After the exciting game yesterday we needed to chill a bit today. Sam actually got on the bike today because he has been a little winded in the last couple games. He needs to keep is stamina up. Dylan never seems to get winded, he just goes and goes. He's also carrying 40 less pounds but still. I like when they cuddle up even when they have the whole couch to spread out on.
Posted by Mark at 6:43 PM No comments: 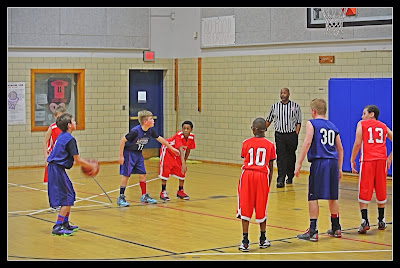 We started out well but fell behind 32-18 early in the second half. That's when the boys turned it on and went on a tear to beat Annandale 43-40. Dylan had a fantastic game with 9 points, 9 rebounds and a couple steals. Sam had 14 points and 6 rebounds. The team really rallied after falling flat and Dylan hit a 3 pointer from the corner to give the the Patriots a one point lead with about a minute left. He was totally stoked and they got the ball back and he fed Sam a perfect pass inside for another two points and ultimately the win. Both boys played well but Dylan really turned it on and was full of energy the entire game. It must be the shoes.
Posted by Mark at 12:19 AM No comments: 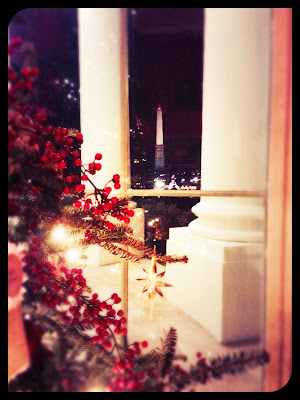 This is the view of the Washington monument from inside the Whitehouse. Not a view I typically get. I drive by it everyday but this is how presidents see it. The scaffolding is halfway down from the earthquake repair that has been going on for the last 18 months. I think I will make it a quest to actually go into that monument when it re-opens. I've been in DC for 22 years and have never set foot in the Capitol or that monument. It might be time for both although the Capitol building is one of the most dis-functional places on the planet, maybe I'll wait on that visit.
Posted by Mark at 8:05 PM No comments: 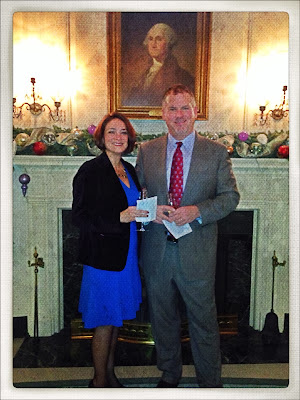 Good time at the Barack and Michelle Obama's holiday party tonight. We spent about a half hour going through security but it was well worth the time. The decorations are pretty spectacular and we had free reign over the entire east wing. The president spoke for a short time and the food and drink was very nice. I'm glad we did it.
Posted by Mark at 10:08 PM No comments: 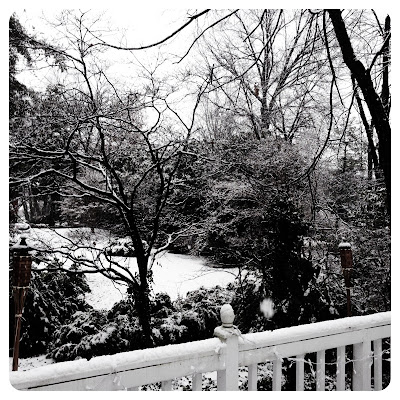 School was cancelled again because of a winter storm that brought some snow but not a crippling amount. We are all home again, making this a very long weekend. It looks like we will get a break from storms for a while and get back to work tomorrow.
Posted by Mark at 12:05 PM No comments: 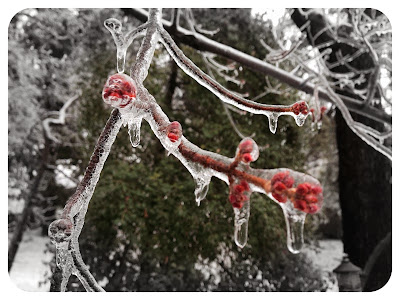 We got a pretty good covering of ice last night. The trees are drooping quite a bit but nothing major has fallen and it's melting off now. Just hanging around the house with some bored boys at the moment.
Posted by Mark at 11:26 AM No comments: 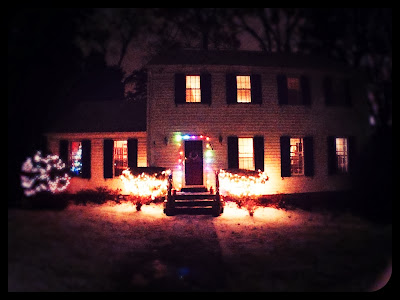 Not surprising but it's not really that bad out, yet. More freezing rain is headed this way tonight and it might be pretty slick in the AM. I guess I will be doing my meeting on the phone tomorrow. At least I have the lights up to celebrate this winter storm. I have a whole bunch on the driveway side of the house and the back. I think I'll take them down the first week of February this year.
Posted by Mark at 6:19 PM No comments: 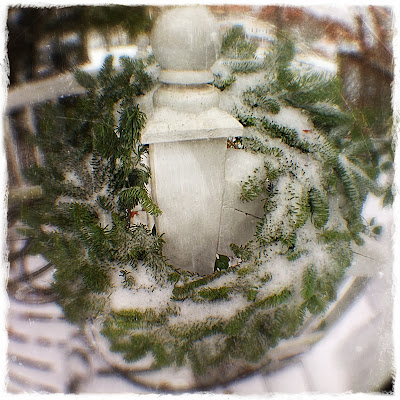 Only about 2 inches and now we have freezing rain but I got my outdoor lights up just in time. Nicole and the boys are at a movie and I'm watching a painful Vikings game. If the ice keeps up, we may be talkin a cancelled school day tomorrow and a decision on what to do with the boys.
Posted by Mark at 3:16 PM No comments: 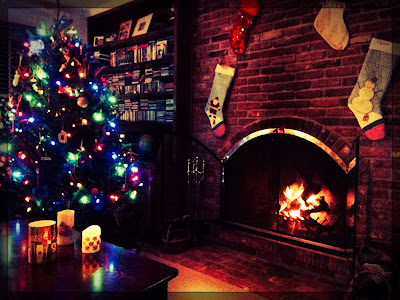 We are home waiting on an ice storm heading this way. We may get a couple inches of snow in the morning, then just ice. It's a good excuse to stay home and do nothing tomorrow.
Posted by Mark at 11:12 PM No comments: 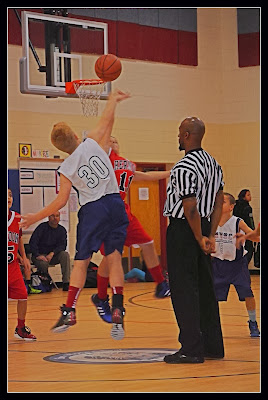 The boys played hard this afternoon but came up short against a energetic Herndon team. Sam played most of the game and scored 19 points with 11 rebounds and 2 blocked shots. Dylan played about half the game and came away with 5 rebounds and 2 steals. He was all over the court and really worked his butt off but only took a couple of shots. The key was that he wasn't apprehensive but extremely aggressive and ran hard up and down the court. Sam had a great game but looked pretty winded out there at times.

With the three pool play games done, we will get our division assigned and the regular season schedule that I will post so you people can plan to come out and see them play.
Posted by Mark at 9:27 PM No comments: 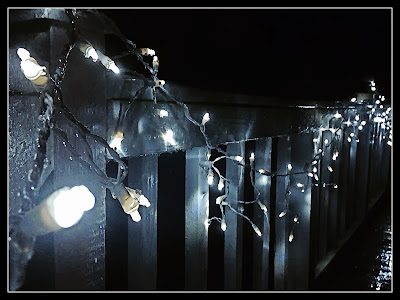 I was able to get some of the outside lights up this afternoon. I'll get the rest up If it stops raining for a little while tomorrow. The boys are off to basketball practice which kind of sucks because I like them here with me on cold, rainy nights. Our third league basketball game is tomorrow. It's against Herndon and with the outcome we will be placed in one of the three 5th grade divisions and a season schedule will be generated. It will be nice to know when the game will be a little further out than a few days.

Oh well, back to staring at the fire and sipping my Duckhorn Merlot.
Posted by Mark at 5:56 PM No comments: 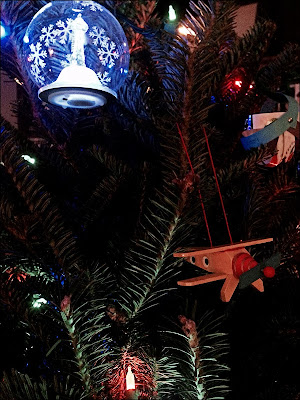 Our new Seattle space needle with a battery powered light and a wooden airplane from my childhood are adorning our tree tonight. It's good to get the smell of a Frazier fir in the house again.
Posted by Mark at 9:11 PM No comments: 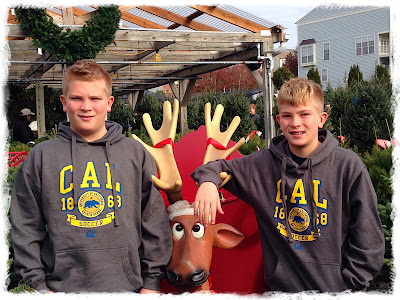 Went to the Apple House for our tree today and got one that just barely fits into its spot in our family room. We could get a bigger on and put it in the living room but that would mean I'd barely see it. This one is a little taller than me and fits right next to the fireplace, but not too close. On to decorating in a little while.
Posted by Mark at 5:47 PM No comments: