Blue skys and cherry blossums are a sure sign that spring is here. The
leaves are jumping out of the trees and the grass is growing. This
time of year us alright but leads us to the sweltering summer months
that I'm not always that found of. On a positve note, all those new
leaves on the trees will eventually turn red and yellow and swirl
around in crisp fall air.

It's going to be 80 degrees this weekend and I still haven't done my
taxes. Sounds like a Saturday indoors and we make make a quick trip up
to Gettysburg on Sunday. The boys are learning about the civil war in
school now what better way to support their interest than to go to one
of the biggest battle sites of them all. One of these days I need to walk around the tidal pool during the
cherry tree blooming event instead of taking iPhone pictures at a stop
light on Ohio Drive. I think the thought of so many tourists in one
place keeps me away. Besides, the whole city is full of blooming trees
this time of year and they are all pretty spectacular. 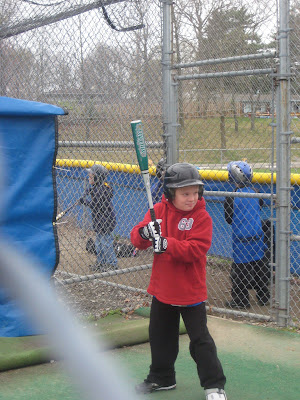 Lot's of time in the batting cage and on the diamond, learning the in's and outs of America's pastime. It's raining now and tomorrow's practice will probably be cancelled but little by litte, they are picking up the game. It was nice to spend the weekend with the little sluggers after a week away. They still annoyed me here and again but much less than when I don't get a break. The Boys machine pitch league team this year is the Dodgers. They are
pretty excited about the beginning of the season and I'm hoping they
get more wins than they did in basketball. Of course they were like 0
and 12 in basketball so a single win in this league will be a nice
improvement. 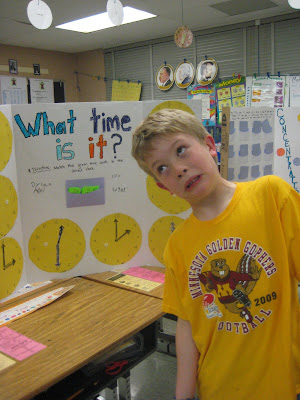 Got home pretty early yesterday morning and found some time to take a nap and get a little work done. I was also able to go to the boy's school for math day. Kind of like the science day they had last year but all focused on numbers. Dylan's project was all about time and Sam's was about money. It was only from 7 to 7:30 but it was fun to see them get all excited about presenting then running around with their classmates. I had some more vein work done today, lots of needles in the leg and I have a knee dr. appointment in an hour. Good times. Early trip accross the Brooklyn Bridge on my way to LGA and an 8am
shuttle back to DC. The kids are already in school but I may be
picking them up early today to get some play time with them. My first United flight with wifi, allowing me to blog at 30,000 feet.
Even so, it doesn't mean I have anything more important to say. The
flight is on time and I should be at JFK in two hours. I'm looking
forward to New York after 5 days in San Francisco. The ACS event was a
success but being closer to home will feel good. On my way to SciMix from the board/staff reception at the Palace.
Hundreds of young chemists posters await in a big hall. The future of
science, pretty spectacular. Yep, that's what I've been doing the last few days. Off to New York
tomorrow morning then home soon after that. Miss Nicole and the boys,
but they are having fun with Grandma. The View
Originally uploaded by homerclees.

The top of the Marriott Marquis looking toward Oakland. Good dinner at
B44, now a couple glasses of wine over the city. The Bay
Originally uploaded by homerclees.

My room looks toward Oakland and Berkeley. It's been nice here the
last couple days. Warm and mostly sunny. I spent most of the morning
in a windowless hotel ballroom but saw the sun this afternoon. Off to
dinner with the wso team now. Spanish food I believe. The whole yard is about to explode with these things but this one got
there first. Early flight to San fran this morning and ran into Gil,
Adam and Emmy on the way to see Cal play in Jacksonville. They took
the red eye from the west coast and were waiting for their connection.
I would have probably walked right by, not having any coffee yet but
caught Adams hair in the corner of my eye. Probably going to miss
Linda who is flying into Dulles later today to spend time with Nicole
and the boys.

Oh yeah, I forgot cinnimon, Emmy's little Yorke was boarding the
flight to Jacksonville too. Kathy, Joe, Bobby, Jake, McDonkey and many other jacks came out to
celebrate kumies first visit back to the
Dc area. Good times. The Cal Pac 10 Champion shirts arrived from Grandma today and the boys
are looking forward to the tournament. I'm going to introduce them to
brackets and take their allowance.

So it turns out that Sam did fracture his shin bone a couple weeks ago and all that limping around wasn't just a deep bruise. He had been getting up at night with pain but at the same time was able to run fairly well in his basketball games. He hurt him self during the big snows of February. He now has a boot to wear for the next 4 weeks as the fracture heals. Needless to say, he is not happy about it but it's better than a cast.

The Doctor did say he could see the healing on the x-ray but he wants it immobilized as much as possible to avoid any further damage and to allow it to heal properly. I believe this is the third broken or fractured leg for Sam and the forth broken bone altogether for him. I'm losing track. I think Dylan is one behind with one leg and two arms.
Posted by Mark at 9:27 AM 1 comment: The boys learning how to play an online role playing game. It's
suppose to be educational.

Second B of the B&B Second B of the B&B
Originally uploaded by homerclees.

Bright and sunny morning in the Blueridge. First stop, Veramar vineyard in Berrysville Virginia. We just arrived
at L'Auberge Provencale in Whitepost for a night in the suite
Romantique and dinner at the 5 star French restaurant that is the
reason to stay at this Inn.

9 years in last Wednesday and a quick trip to Virginia highlands to
celebrate. We needed break from the kids as well. I'm really looking
forward to dinner. May have to go for the fois gras. Not sure I can
spell it right but I'm sure I will be able to eat it.