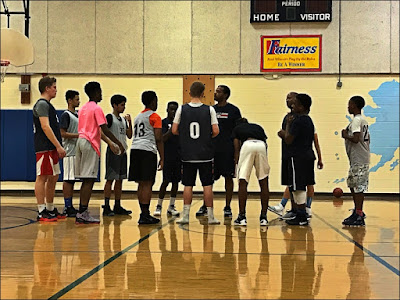 I may be biased but after watching some practice tonight, I think this is a really good team. The three new additions and the improvement in the old timers should make us extremely competitive this year. Our first real test is Sunday against Gainesville. They have been in the top two teams in the league the last four years. I like our chances.
Posted by Mark at 10:34 PM No comments: 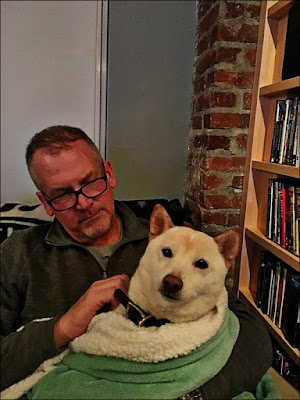 One of Adam's thanksgiving guests brought this little puppy. I hung out with it when we he came out from under our bed a few times. The most frightened dog I've ever met. It was diagnosed with epilepsy recently so that may have something to do with it.
Posted by Mark at 8:32 PM No comments: 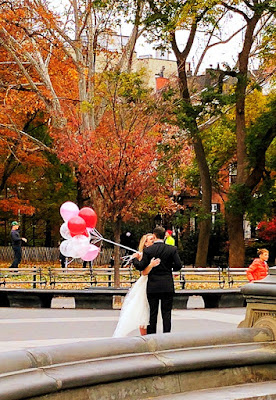 Got lots of exercise in this morning to make way for Thanksgiving treats. Always interesting sights in Washington Square.
Posted by Mark at 1:48 PM No comments:

Dinner and a show 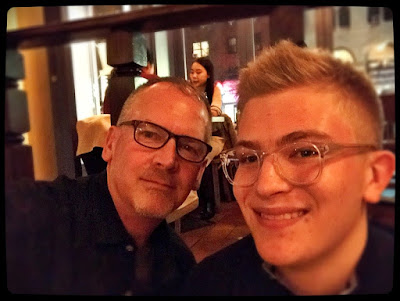 School of Rock was really pretty good. We saw the matinee then went to dinner in the the east village. The kids in the show were impressive and it was a fun show.
Posted by Mark at 8:38 PM No comments: 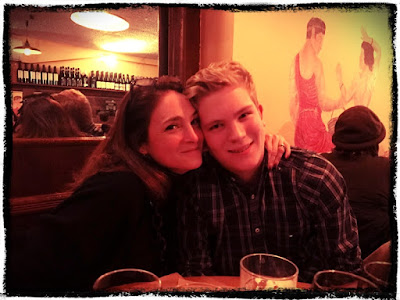 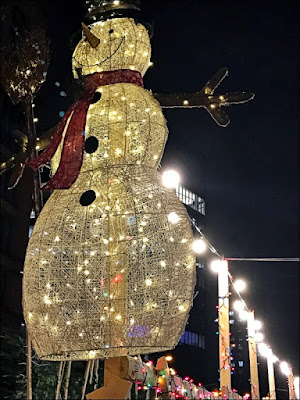 The Knicks vs Trailblazers game last night was fantastic. Adam got us owners suite tickets with great mid court seats. Saw a number of other celebrities, including Bill Bradley, Phil Jackson, Leslie Jones and Billy Crystal. The Knick won by 4 with an amazing 4th quarter by Derick Rose.

The Christmas trees were being delivered to all the local stands in the village as we walked back to the apartment. It's cold and feeling like the holidays here in New York.
Posted by Mark at 10:55 AM No comments: 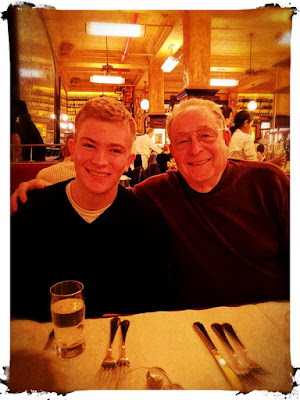 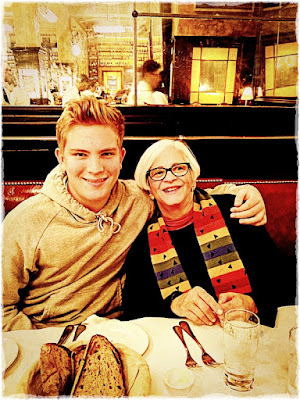 Linda and Gil's 54th anniversary dinner at Balthazar in Soho.
Posted by Mark at 10:24 PM No comments: 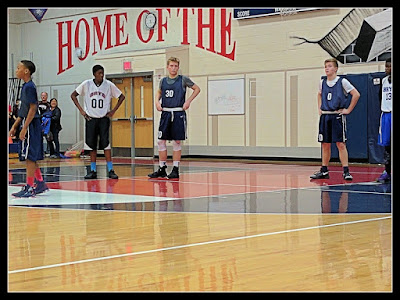 Scrimmages usually include some instructive coaches time which leads to boredom as the boys wait for the action to start again.
Posted by Mark at 8:41 PM No comments: 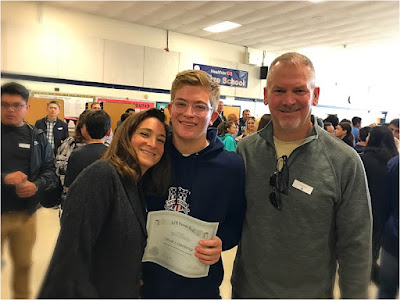 Dylan made honor role after just missing it by half a grade each quarter last year. It was great to see him walk up and get his certificate and it was really great that he buckled down and got the grades. Sam missed honor role for the first time in his middle school career. He did have to attend the ceremony because orchestra played at the event. To his credit, they played really well and I realized after all these years, he actually plays viola like a boss.
Posted by Mark at 6:15 PM No comments: Sent from my iPad
Posted by Mark at 8:12 PM No comments: 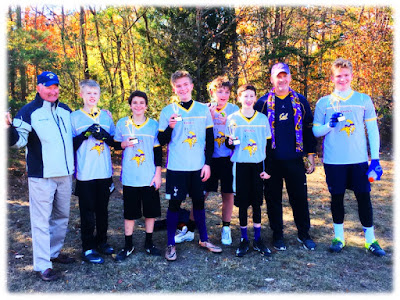 In my first coaching job since 2012 I wanted to accomplish something a little different this season. Most of these kids have been playing flag football for years and every season they worked at learning plays and running defenses with a lot of help from the sidelines. Of course they needed lots of help in 4th, 5th and 6th grade and calling in plays was a necessity.

My theory this year was that they could take the reigns and run the team and call the plays from the field. This allowed me to stop looking at a chart of plays and yelling in a string of names and numbers and giving me an opportunity to focus on what the other team was doing and providing strategy advice to the players. This came with some risk but ultimately, it empowered the boys to own the game and develop critical thinking skills. It also turned out that they had more fun taking responsibility.

We struggled during the season but I saw improvement with each game as the testosterone fueled play calling turned into more strategic decisions based on what they were seeing on the field and the advice I was giving on the sideline. We had great athletes but lost some close games because of small mistakes. I believed that over time they would become much more effective than the other teams in the league because they were in control and more capable of adjusting to the game situations in real time.

I'm happy to say that they proved me right. We played two games yesterday and won them both for the NVFFL Championship. The boys were clicking in the first game against the Eagles, winning 38-24. The whole team played well with Sam and Dylan hooking up for two long bombs for scores and Sam getting a pick 6.

The championship games was against the undefeated Saints whom we lost to twice in the regular season. They got to watch our game against the Eagles and were overheard dismissing us as we played. Over confidence is never a good thing and proved to be the undoing of the little flaggers.

The young Vikings played a flawless game and while it was close the entire game, we played calm, cool and collected football while the Saints carped at each other and threw little tantrums all game long. All the Vikings contributed with Dylan and Sam each scoring 2 TD's. The championship was 26-19 with Owen scoring a safety to basically destroy the Saints last real chance to score.

I'm very proud of (from left to right) Benjamin, Owen, Dylan, Avery, Corbin and Sam. Not to mention Braedon (not pictured due to vacation) and Dave (far left who assisted with a couple practices and provided strategic advice on the sideline). It was a fun season. I kept telling the boys after a win or a loss, our goal is to be in the last game of the season and we did even better, winning it. 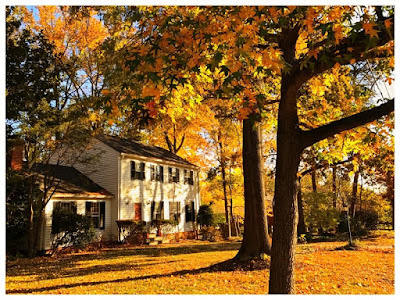 The post election shock has subsided some and glimmers of hope are still present as my favorite season quickly ramps up and shows signs of coming to a conclusion. The next four years will be interesting and possibly trying but the peaceful transition of power is on track and with one party rule in place we know who to hold accountable for policy moving forward. Half this country is already very disappointed, the other half is about to be.
Posted by Mark at 11:08 AM No comments: 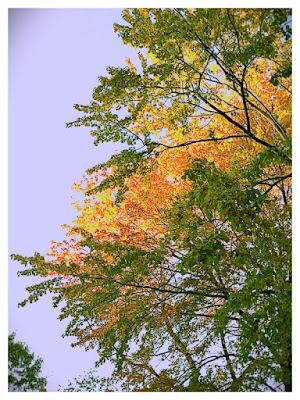 I think we will be seeing peak color this week. The air is cool, the leaves are falling and outdoor sports are ending. A couple more football games this Saturday, then it's 5 months of gyms.
Posted by Mark at 7:02 PM No comments: 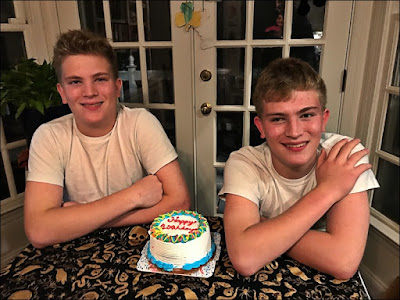 A long day of basketball yesterday which made our birthday dinner and cake a little late but we got it in. So happy to have these boys in my life the last 14 years. They are getting a well deserved day of rest today while I work from home. Teacher work days today and tomorrow, they don't have to be back at school until Wednesday.
Posted by Mark at 12:20 PM No comments: 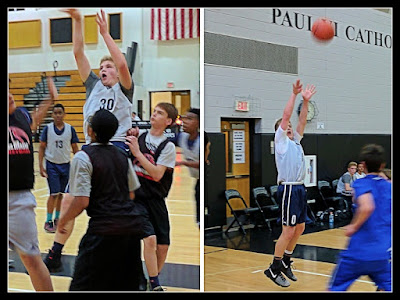 Lots of basketball on their birthday but they wouldn't have it any other way.
Posted by Mark at 7:46 PM No comments: 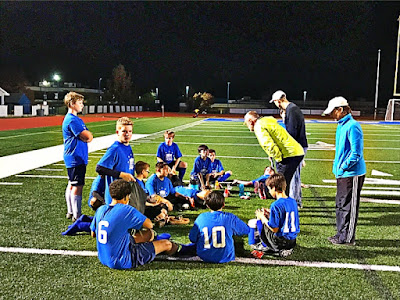 Soccer ends the season with another loss but the boys ran hard. We are at a preseason basketball tournament now.
Posted by Mark at 4:21 PM No comments: 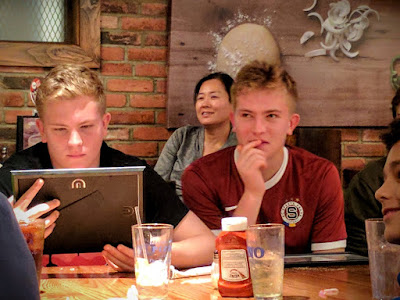 The boys are getting a little old for the team party thing. It was a rough soccer season but they had fun.
Posted by Mark at 8:35 PM No comments: 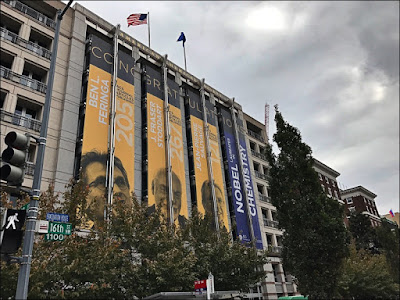 Win a Nobel Prize in Chemistry, get your face on our building.
Posted by Mark at 8:23 PM No comments: