The newer version of wso in Denver. I wish I could combine the AARP wso with the ACS wso. That would be an unstoppable force. Denver is kind of a cow town but dinner at Rioja was fantastic. Monster bear trying to get into the convention center.

It was a sleepless night with lots of little power hiccups but nothing long enough to get the generator cranked up. Many people did lose power around us and are still in the dark but we got lucky this time. The yard was full of downed limbs and leaves but no major branches or limbs fell. We did a little clean up this morning and I'm now on my way to Denver, two days late.

Sent from my iPhone 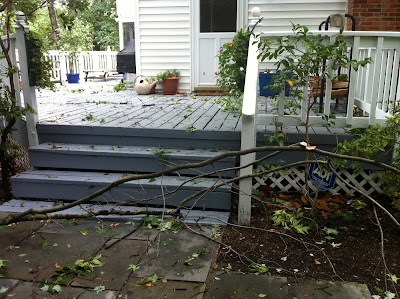 We have been hunkered down in the basement since we lost power for about 30 seconds at 6pm. It just seems safer down here and I don't particularly like watching the trees sway around out the windows. We have had a couple more flickers of power outage but not the big one, yet. It's still raining and the wind is pretty bad. I think we are at about 3 inches and have a couple more coming. The winds are supposed to stay pretty strong until the morning.

We are well and watching Titanic, the only other disaster left after our earthquake and hurricane.
Posted by Mark at 10:16 PM No comments:

Hunkered in the Basement 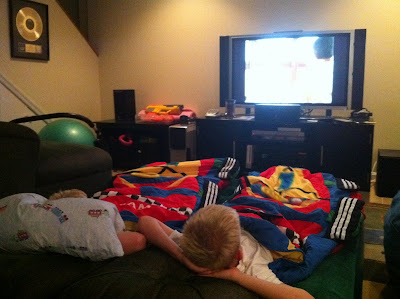 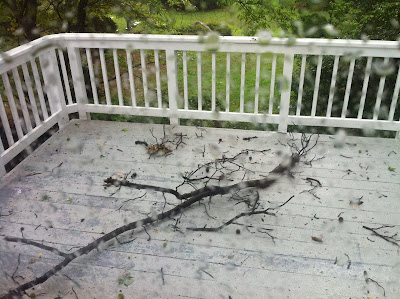 Mother Nature clearing out the dead wood. It made a nice thump but the limb has obviously been hanging up there for a while.

Not much happening yet. Some rain and wind but I'm sue the best if yet to come. Wind predictions of around 40mph which is similar to the big winter storms of a year and a half ago which isn't that bad but when you have the number of trees we have in our yard, it's hard to predict what will happen. Trees are good unless then are falling down. We've all been inside all day and are finding things to do. We might sleep in the basement if things get really windy.
Posted by Mark at 2:42 PM No comments: 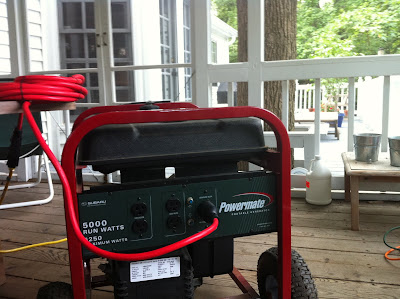 I've never actually needed this thing but it is set up in the screened porch and ready to go if needed. I have the power cord running out on the deck, down under it then in the bathroom window under the deck. It will power the sump pumps if we have a lot of rain and the freezer and fridge in the basement plus I guess a couple other things. I'm hoping I don't need it but you never know.

The storm looks to be staying east of us by a 150 miles but we will still probably get some tropical storm winds of about 40mph with some gusts that could go to 60mph. Rain only looks to be 3-5 but the sump pumps will probably start working after 3. I postponed my trip to Denver until Sunday at this point. If we weather the storm well, I should be able to get out of town pretty easy. If not, I guess I'll stay here and clean up.

Ready for Some Football Ready for Some Football
Originally uploaded by homerclees.

First practice with the new team and yes, I'm a coach this year. Assistant coach that is. Gotta get my feet wet before I move on to the Vikings.

So as I was peacefully eating lunch and checking out a hurricane that seems to be bearing down on us, when my entire 9th floor office with extremely large windows starts to shake while things start falling off my desk. In DC, your first thought goes to a bomb, and this would have been a big one. I was not expecting an earthquake and I must admit, it freaked me out a bit. I got downstairs in about 3 minutes with everything I needed to head home and jumped in the car to beat the traffic. It's my turn to pick the kids up at camp so I wanted to get a jump on what I'm sure is gridlock at the moment. I'm home now and we just have some things that fell off shelves but otherwise the house seems fine.

This is really the first earthquake I've ever really felt and I'm not a big fan. New do's for the boys. Me too but I don't look as good.

Now I cut the women some slack when she got Elvis Presley's birthday mixed up with when he died but hey, like Jim Morrison, Elvis may still be in the building.

But, the latest gaff is really remarkable. I like history and understand that the Soviet Union ended many years ago with all the former republics going their separate ways. She was recently quoted saying the following.

"What people recognize is that there's a fear that the United States is in a an unstoppable decline. They see the rise of China, the rise of India, the rise of the Soviet Union and our loss militarily going forward"

We have bigger problems if the Soviet Union is marching forward again. We are going to get crushed in the next Olympics by genetically altered athletes with unabrows.
Posted by Mark at 5:21 PM No comments: 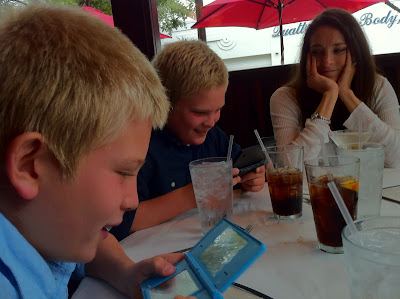 We went to a show at Imagination Stage in Bethesda on Saturday and then met Steve and Patty for dinner. The boys were actually pretty good the whole time and engaged in some conversation between video games but all in all, not bad little dinner companions. Yesterday's golf game was called off due to rain so I spent the whole day at home while the boys had a birthday party to attend. Staying home is a good thing to do on weekend every once in a while.
Posted by Mark at 8:37 AM No comments: An early show at Imagination Stage.

I didn't watch the Republican Presidential Debate yesterday but I can't help reading about it. I think I'm going to start posting my favorite Bachmann quotes until she drops out of the race and hopefully out of the news.

“The Congress gave Barack Obama a blank check for $2.4 trillion"

How does a blank check have an amount on it? Not to mention that the authority to issue new debt is for things we've already purchased.

Oh well, I read an article on CNN yesterday that made a strong case for why at the end of the day it will be Perry\Palin vs. Obama\Biden. Another religious Texan and whatever Palin is, scary.
Posted by Mark at 1:28 PM No comments: 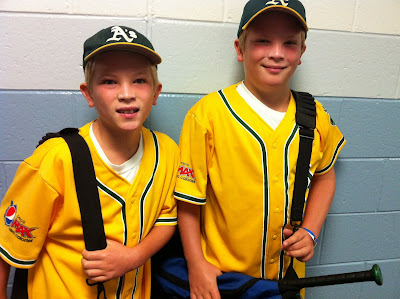 The boys went to Baseball Camp this morning wearing their A's jersey's from the Twins, A's game in Oakland. It was jersey day. They looked good.
Posted by Mark at 8:53 AM No comments: 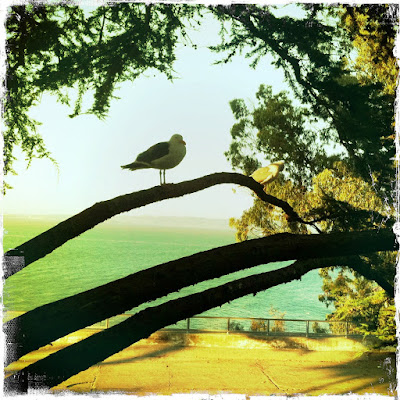 It's been a busy two days back at work but it's good to get back in the game. I've posted a bunch of pictures to flickr of the week in NoCal. 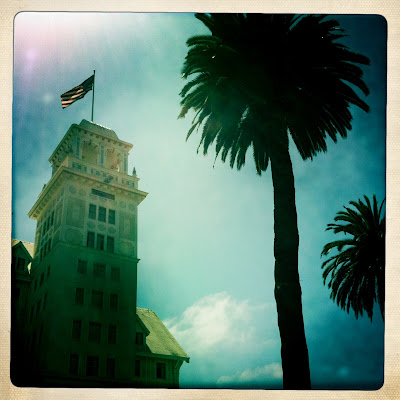 Started the morning at Pride Mountain and now on to Caymus. Not a sucky way to start the day. We had a couple of very nice tastings today at Audelssa and Pasterick. Wine is good. The Rock
Originally uploaded by homerclees.

We went out to Alcatraz island tonight to show the boys why crime does not pay. We did the night tour so we got some spectacular views of the Golden Gate bridge at sunset as well as the SF skyline at night. Linda and Gil have lived in Berkeley for 30 years and they had never been there. Kind of like the fact that I've lived in DC for 20 years and have never been inside the Capitol. You look at if everyday and don't ever feel the need to go inside.

We went up to the Tilden Park Carousel after the train ride on Saturday. They are celebrating the 100th anniversary of the roundabout thing. I decided to shot in 1920's black and white with my Super 8 app on the iphone. It seemed fitting. The kids are off to camp today and I'm off for a workout and message at the Claremont. We have an Alcatraz night tour later today. Should be exciting.
Posted by Mark at 2:16 PM No comments: