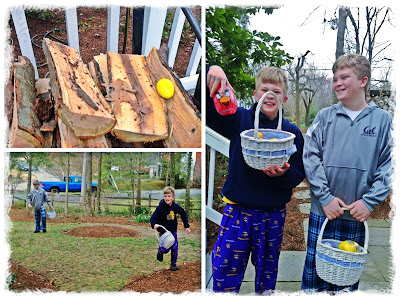 The bunny laid a ton of eggs early this morning and the boys collected what the squirrels didn't naw open and consume. We have to have some pretty amped up flying rodents in our yard at the moment. Regardless, the Easter egg haul was pretty good.
Posted by Mark at 10:44 AM No comments: 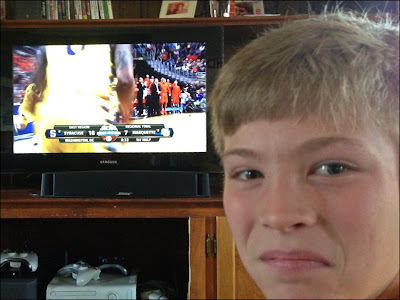 Dylan is encouraged by the 1st half of the Syracuse game. He's been bleeding orange all year.
Posted by Mark at 5:22 PM No comments: 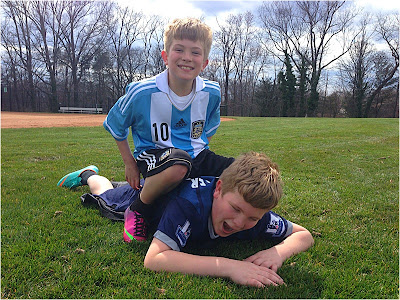 I was working from home today but needed to get the boys out for some kicking and running. That usually devolves into some wrestling and at times, Dylan can get the upper hand. We also took grandma and grandpa to the airport after a nice visit. We had dinner with some friends of my parents from college in old town last night. The boys behaved well and participated in the conversation. We left when they inevitably got antsy and left the old college friends to discuss all the crazy acid parties and beer bongs they had back in the day. We have a pretty slow weekend planned this weekend but baseball and soccer will ramp up quickly next week.
Posted by Mark at 4:44 PM No comments: 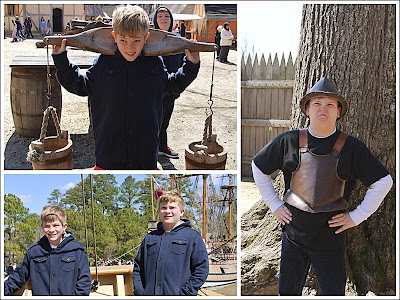 We finished our colonial tour at Jamestown today. It was a nice spring break getaway. We have extended our history tour spring break theme another year, even Busch gardens had history included. Good times but I'm ready for bed.
Posted by Mark at 10:01 PM No comments: 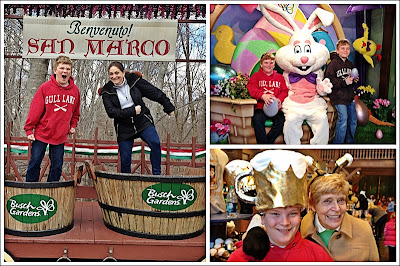 It was a little cold but sunny most of the day and we had the place to ourselves. Theme parks can be horrendously crowded but we really never stood in line for anything today. We had a great day on the roller coasters and saw a few of the shows. Grandpa Carp rode a few of the coasters but only once. He did like he haunted castle. Grandma stayed off the rides but like the shows. We spent about 7 hours wondering around and it's nice to be sitting at the moment.
Posted by Mark at 5:57 PM No comments: 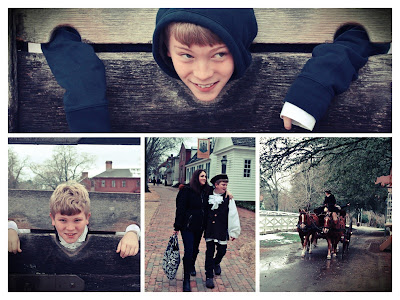 It was a chilly day on the streets of Williamsburg but we had a nice time in a number of building tours and talks. The weather kept the crowds down and a little snow made it look nice. Sam did the whole dress up thing and many of the characters were pleased with his choice of attire.
Posted by Mark at 6:26 PM No comments: 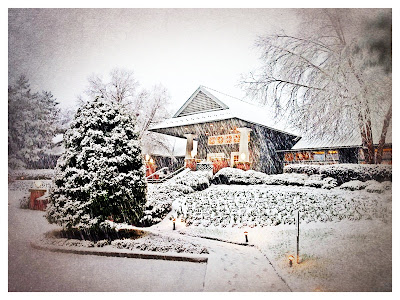 I've been wanting a good snow storm all winter and we sort of got one these last few days of march. Colonial Williamsburg should look lovely with a little snow and things should be back to early spring in time for Busch Gardens on Tuesday.
Posted by Mark at 10:25 PM No comments: 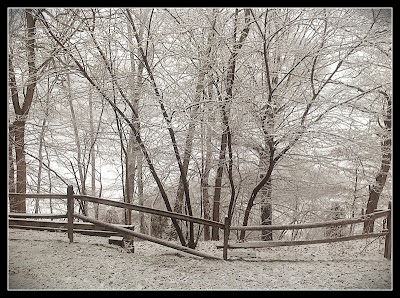 A little snow never got in the way of the early settlers golf games. That's the golf course behind those snow covered trees. The colonials landed here because of the good golf courses and even with the snow, it was warmer than those courses in Scotland. We are off to dinner in a few minutes and hopefully the weather will improve tomorrow.
Posted by Mark at 6:29 PM 1 comment: 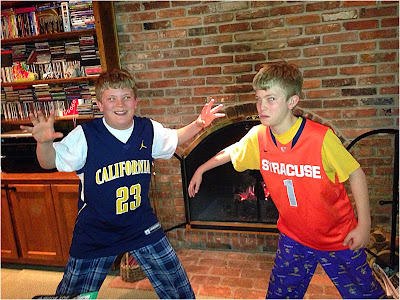 Cal and Cuse go at it tonight and the boys are ready to rumble.
Posted by Mark at 9:11 PM No comments: 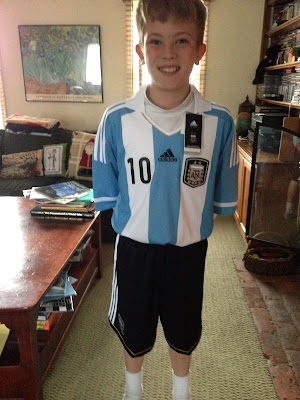 Dylan's new Argentina national soccer kit showed up today. He was very excited and for some reason I think they look great in soccer jerseys and shorts. Sam is sad he doesn't have a new kit too but Dylan decided to use his own allowance money on the jersey. I bought the shorts because he was due a treat.
Posted by Mark at 3:53 PM No comments:

This is a short section of the 8 minute play the boys did with their Odyssey team yesterday.  Sam has a little uncle Jeff in him, a bit of a ham that is. 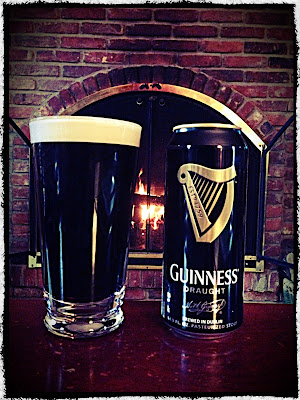 St Patrick's day is not quite right when it's on a weekend. Takes all the fun out of leaving work at 11am to get to a pub. Yesterday was pretty busy with the odyssey of the mind tournament in the morning and a dinner out in friends in Catonsville. I'm too tired to battle the crowds at Murphy's or the Four P's. just gonna curl up with this beer and the boys and watch college basketball.
Posted by Mark at 4:54 PM No comments: 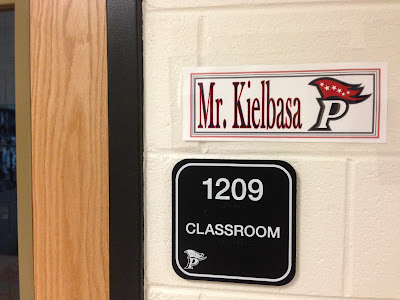 We are at the odyssey of the mind tournament being held at Patriot High School. I'm sure no one makes fun of this teachers name.
Posted by Mark at 12:48 PM No comments: 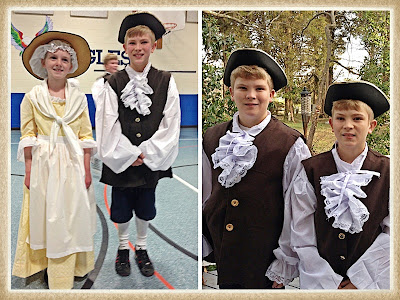 Dylan wanted another picture with Katherine during Colonial days at school. Both boys looked great in their momma created outfits. Film of the dance coming soon.
Posted by Mark at 3:54 PM No comments: 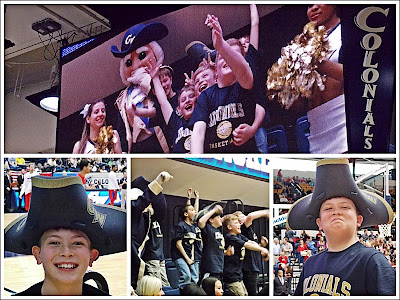 I got some more pictures from the mom who took the kids to the GW game last weekend. I guess the camera man was putting the rowdy little bunch up on the scoreboard screen over and over again. It didn't hurt that the birthday boys mom bought them all GW basketball t-shirts before the game. Look at that bunch, the mascot, cheerleaders and floor seats. That was quite the party.
Posted by Mark at 6:08 PM No comments: 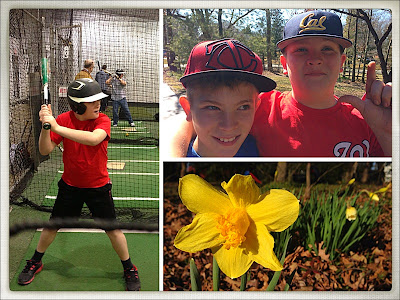 We hit the batting cage for an hour this morning, picked up more baseball gear at the store, ran an infield practice and finished up on the pitching mound for both boys. Sam was really hammering the ball in the cage. His only issue is he gets over confident and swings for the moon at times. Dylan lacks confidence at the plate but by the third set of pitches, he was getting some aluminum on the ball. He is still a little behind the pitch but the machine was throwing them at 45mph. Only one or two pitchers in the league will throw it that fast.

They were both pitching rather well today as well. Dylan has a good motion and again, if he relaxes and throws with confidence, he's right on. Sam throws like he is built. When he puts his weight into it, it comes hard. The kid is a brick house. He also has a natural right to left slide to it. His biggest problem is that he gets lazy and doesn't follow all the steps to a good pitch after a while. He may be a great one inning closer. Dylan can be a two inning starter or middle reliever.

The first flowers are coming up and both baseball and soccer teams are formed next week. We do have a free week without any practices this week, then it's back to weekday practices and weekend games till mid June.
Posted by Mark at 5:41 PM No comments: 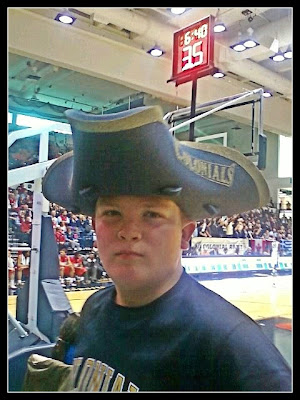 Sam and Dylan went to Sam K's birthday party today at the George Washington Colonials vs. Dayton basketball game. They had a great time from the stories I'm hearing. It was an overtime win for GW with a cheerleader - Dayton player exchange complete with foul language. I guess the Dayton player fouled out, the GW cheerleader said something like " sit down asshole" and he called her a bitch. They had floor seats so it was all in front of them and it was their favorite part of the game. The boys also took their shirts off at some point and waved them above their heads. Good times.
Posted by Mark at 6:00 PM No comments: 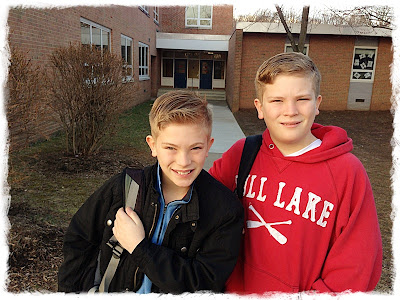 In case you missed Nicole's Facebook post, here are the boys with some serious gel goin on. They are starting to care about their hair a little more these days. Girls have that effect on you.
Posted by Mark at 6:41 PM No comments:

The schools were closed, my office shut down, even the federal government threw in the towel but the Snowquester storm did not deliver much. Yeah, we have some wet slushy snow around and some pretty good winds but not the winter wonderland I was hoping to take pictures of and post on this blog.

It was nice sleeping in and hanging around with Nicole and the boys, any snow day is a good snow day. We will have to wait until next year for a chance at a real snow storm, this was winters last gasp for DC, the flowers will start coming up next week and the cherry blossoms will be a peak bloom by the end of the month. I can still have fires until mid April but those days are numbered too.

Sent from my iPad
Posted by Mark at 5:13 PM No comments: 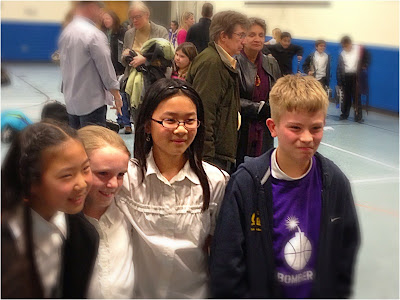 Dylan's favorite friend played last night too. The little blond girl to his right is on his mind and he wanted me to post her picture on the blog too.
Posted by Mark at 11:43 AM No comments: 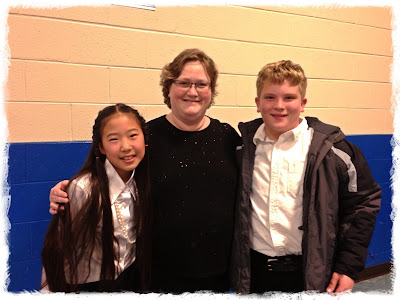 Sam with his music teacher and girlfriend. Yes, they are sorta dating, at least that's the agreement they have with each other. The strings concert was nice, and short. Sam did really well but he was pretty nervous.
Posted by Mark at 8:30 PM No comments: 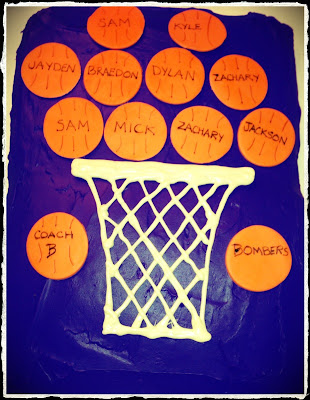 The basketball season ending party was tonight and the kids all got medals and bombers t-shirts. It wasn't a great season but the boys all had a ton of fun. Tonight was no different with the whole crew running around the restaurant. Thankfully the place was empty on a Monday night.
Posted by Mark at 9:28 PM No comments: 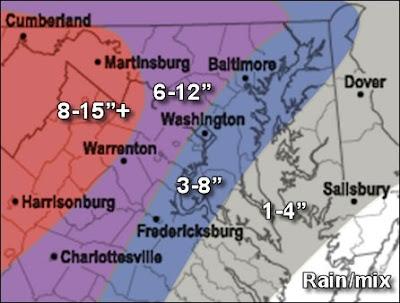 This looks like a nice March surprise.  Still a couple days out but the best shot at some snow in a couple winters.

It's About The Shoes 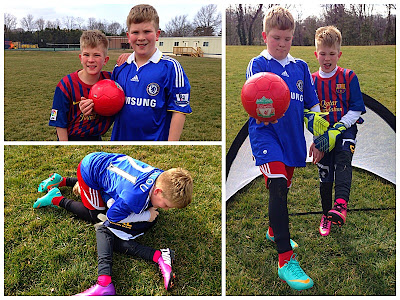 I got the boys their soccer cleats yesterday and we took them out for a spin this afternoon. They love new sports shoes and they had been keeping them close by from the when we got in the car after leaving the store till this morning when they laced them up and we had a little soccer clinic. They also have their signed Messi jersey and "worn in a game" Kalou (Chelsea Footballer) jersey. They were all about basketball a couple weeks ago and now it's soccer 24/7. Not sure how they are going to fit baseball in their lives but that's coming soon too.
Posted by Mark at 6:05 PM No comments: 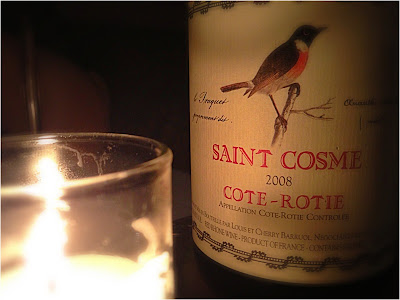 We celebrated our 12th anniversary last night with Harry Reid at Restaurant Eve. Well, actually Harry was at the table next to us and our anniversary is today. Thanks for all the nice cards and gifts. We are spending the day with our favorite additions to our marriage.
Posted by Mark at 10:07 AM No comments:

Getting a bite before seeing Patrick for much needed haircuts.
Posted by Mark at 2:45 PM No comments: 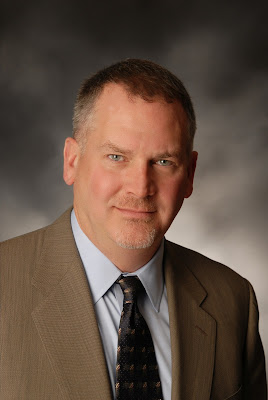 I had a head shot taken for corporate type things in February.  It was time, my last one was done in 2002 I believe.  I'm a little older and slightly more worn but can still pull off of tie when I need to.
Posted by Mark at 9:34 AM No comments: