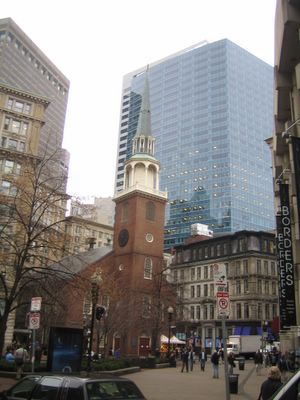 So this is the Old South Meeting House in Boston, with the building I was meeting in on Monday and Tuesday behind it. The building was built in 1726 and Ben Franklin was babtized there. In 1773 Samuel Adams gathered 5,000 people there to protest British taxes and gave the signal that started the Boston Tea Party. The big glass building behind it serves a similar function today I suppose. People gather their today to discuss and plan for the ongoing social interaction revolution that technonlogy is allowing to happen. Hopefully we won't be dumping computers and blackberries in Boston harbor anytime soon.