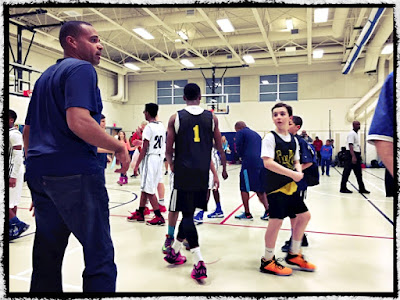 The LMVSC Patriots rolled over Hanover in our second game tonight 68-52. This was really a great team effort with everyone contributing. Probably the best game I've seen them play all year. Sam had 10 points ,10 plus rebounds and 6 blocked shots while Dylan had 2 points 6 rebounds and 3 steals. Hanover was pretty big and the #1 guy in the picture had 28 points but we out passed, out shot and out team worked them for the win.

I do want to mention that they were nice people too. Not like Burke.
Posted by Mark at 9:19 PM