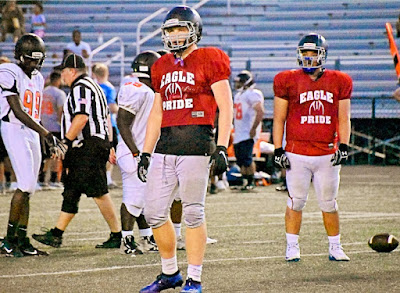 Sam started at tight end and defensive end in yesterday's scrimmage against our closest rival Hayfield. As TE they have him lining up close to the tackle on a play or two then they move him out to the slot to try to create a mismatch. He's the biggest receiver they have. He didn't get targeted much last night and it frustrated him a bit. It's his first game in almost two years and he will get his shots this season.

He played well at defensive end and nearly had a couple sacks. The dual starting positions wore him out a tad so the coaches will need to determine where they want him to expend his energy this season. He can't play every down on both sides.
Posted by Mark at 6:03 PM