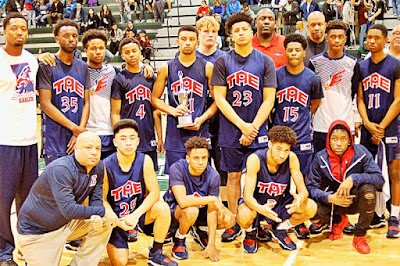 The eagles played a nearly perfect game last night in the Regional final against division rival Wakefield. The have had our number all season but we stayed neck and neck with them all night even after the refs decided to tip the balance with a ridiculous bench technical which resulted in a 4 point swing. The refs had no business playing that much of a role in a close game when their foul calls were obviously questionable. They can make poor calls and they all do at times but don't throw the game for a minor outburst after two really questionable blocking fouls that could have could easily been called charges. The refs on Thursday night ignored two big outbursts from the Stone Bridge coach because they wanted the kids to determine the outcome. The refs last night seemed to be more concerned about their own feelings.

Regardless, we tied it up with 17 seconds left but let their senior star score on a nice drive to win the game. This picture is of a bunch of really pissed off Regional runner ups with their trophy.

At this point, we are either traveling to Charlottesville or Harrisonburg for a state quarter final game next weekend and if we win that, we may be right back to playing Wakefield in a semi-final matchup.
Posted by Mark at 6:23 PM