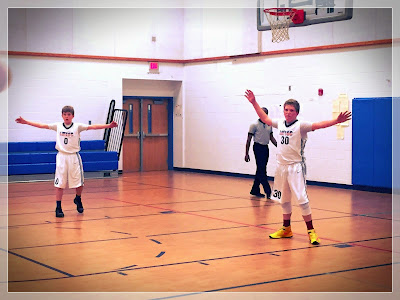 Here are the boys setting up low with their hands up. They played hard against a very good team from Loudon county and also lost a close game against McLean in the morning. They won both games yesterday and went 2-2 for the tournament. Sam struggled around the basket in the McLean Game this morning and scored 7 points with a dozen rebounds. He bounced back in game two with 18 points and 10 rebounds. He really seemed to gain confidence against a really good team.

Dylan had 2 points in each game he also had a couple steals in the first game and a half dozen rebounds. Dylan doesn't get as many minutes as Sam but runs his ass off when he's out there. He sprints from basket to basket and fights for every loose ball. I was proud of both of them today. They played well yesterday too but we're a little off on shooting due to a week without touching a basketball. Dylan had 2 points and Sam had 3.
Posted by Mark at 6:26 PM