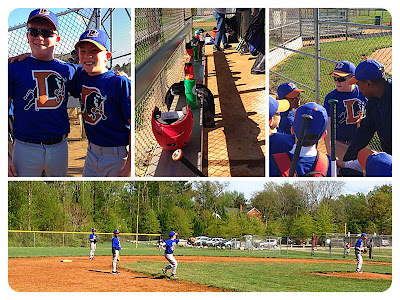 Another big game for the Carpenter boys. The Bulls go 2-0 for the season with a big 15-7 win over the previously unbeaten Iron Pigs. Dylan has a great eye and walked and scored three times. He did take some nice swings too and fouled a couple off. He hit the mound in the last inning with a three run lead and held the Pigs scoreless, walking two, striking out two and hustling to the plate to tag a runner trying to score on a passed ball. He was Johnny hustle out there.

Sam caught two innings and kept the Pigs from scoring by keeping the ball in front of him extremely well. He also went two for three at the plate and ended the game with a single that scored 3 runs and ended the game on the mercy rule (8 runs). Another exciting game for the Bulls.

My early observations for the team is that we have some great base runners, a deep pitching staff and some hitters that haven't really found their grove yet. All six teams in the league are probably pretty similar but the Bulls look well rounded.
Posted by Mark at 7:08 PM