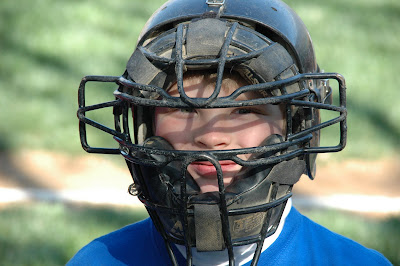 The boys got a good game in on Saturday morning Dylan got the first hit in this league between the two of them. It was more like a bunt but he got on base. Sam was takings violent cuts at the ball but didn't connect again. It will probably go a long way when he does connect. Sam has also fallen in love with the catchers position. I bet the fascination will end when it's 90 degrees and humid out there on on the field. It was about 50 and a little windy yesterday morning. The parents were all freezing.

I added a bunch of picture to my flickr account that include the opening ceremonies on Friday night and the game yesterday morning. They like playing baseball and they are pretty good teammates. Hard to say what sports they are really going for focus on in a few years but it's going to be all baseball until early June.